Twin Post: Color Club Take Me To Your Chateau

Let me preface this post with a little backgrounder on the acquisition of this particular nail polish. Winners has been a den of nail polish sets a while back and I was lucky enough to snag this one particular set that was a mix of pastels. It had the prettiest spring appropriate colors that I just couldn't resist. But as is the case with most of these sets, none of the bottles had names on them. Google could only point me to possible matches with some of the colors being harder to differentiate. And you know how even swatches aren't always 100% accurate. So, I posted a photo of the set on Instagram (find me there as polishedindulgence!) and found out that Marta, my dear friend who runs Chit Chat Nails, had the exact same set and dilemma. We eventually found another blogger, Denise over at I Haz A Beauty Blog, through another kind soul (it's not getting to convoluted, is it?) who had the names for all the polishes in the set. Huzzah! Nail polish name dilemma solved! To celebrate (okay, maybe that's just more me, but then I'd find any reason to celebrate), Marta and I will be doing a series of Twin Posts for the next few days! If you're wondering how exactly that works, well, we write about the same nail polish on the given day and do a spot of nail art with it at the end. So, yes, you're in for a treat! If you're here from Chit Chat Nails, hello and enjoy (Hammie also wants me to tell you that he'd love for some treats, if you please)! Now, let's get on with probably the prettiest pale blue creme that I own: 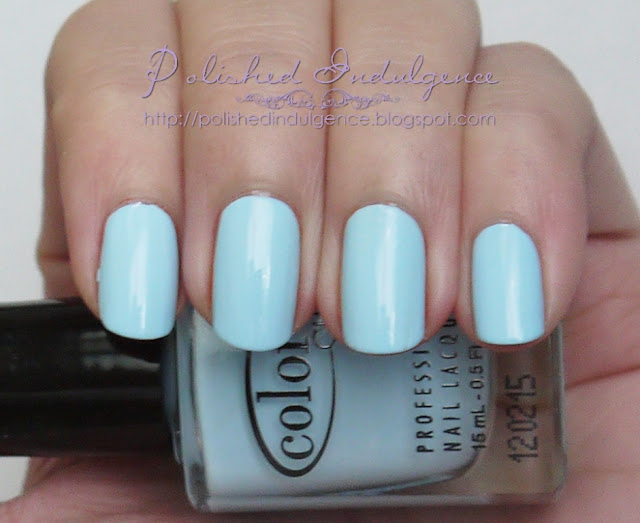 Brand/Name: Color Club Take Me To Your Chateau
Color: Pale blue
Finish: Creme
Price: $3-8 CDN for 14mL
Seen at: Nail Polish Canada, Trade Secrets, Winners (as part of an unnamed set; seasonal availability) and wherever Color Club is sold.
Note(s): I got my bottle from an unnamed set of 6 nail polishes and 1 top coat for $14.99, bringing my bottle price to approximately $2.14. Because it is part of this set, my bottle also does not have any label, including the ingredient list. The bottle cap also does not have the texturized brush handle or the flower logo at the top. 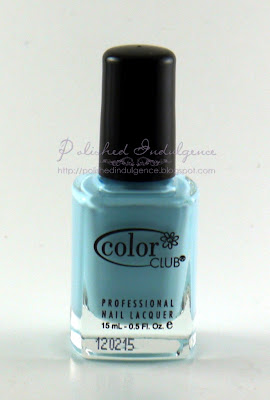 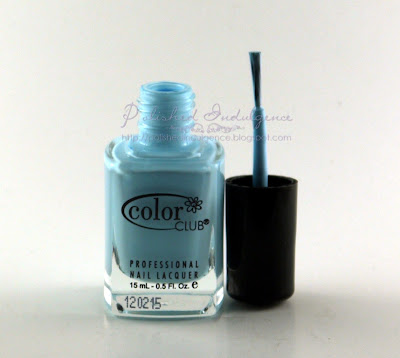 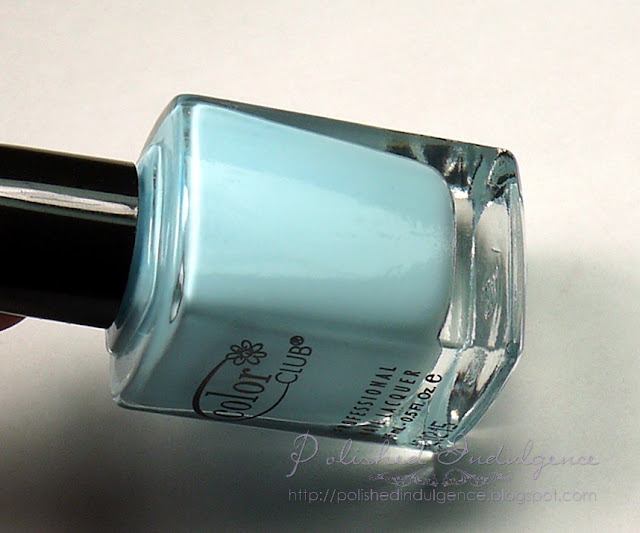 Simple and classic pastel blue.
As you well know, I'm a huge, huge fan of blue. So it comes as no surprise that I absolutely adore this pale blue. It's the sort of shade that evokes thoughts of spring or even the cold of winter. Maybe even the blue in that saying that goes "something borrowed..". It's pale but not chalky as some pastels tend to be. The finish is a nice classic creme. After all the flashy finishes that have been coming along lately (take your pick: magnetic, crackle, flakie, the list goes on), I find myself gravitating towards the tried and true creme finishes. There's something to be said about the simplicity of a finish that really showcases the color of the polish with none of the bells and whistles. Major points for versatility as well, seeing as layering on a different sort of finish like a glitter can easily change the creme finish and take it a level higher.
***All nail swatches were done with Orly Bonder Base Coat and two coats of Color Club Take Me To Your Chateau unless stated. 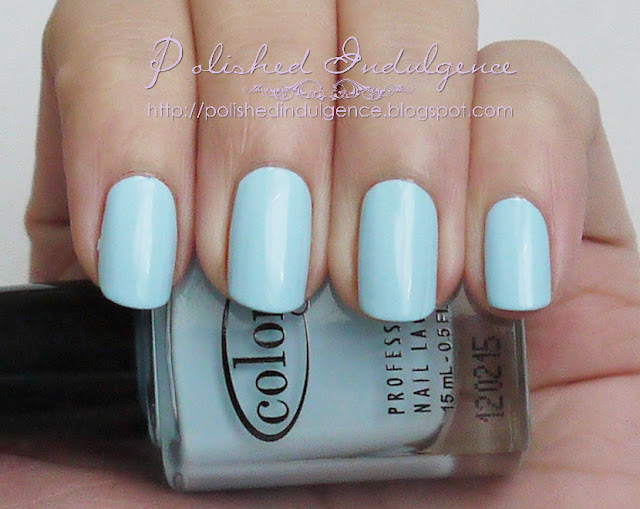 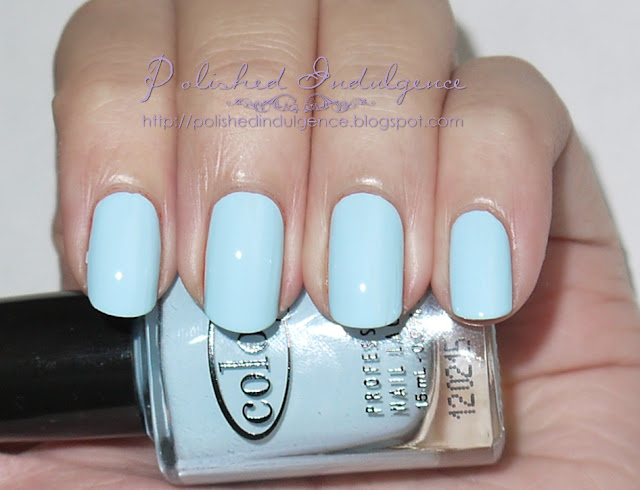 Natural light/No top coat/Flash
It's not actually as bright as the flash makes it out here. 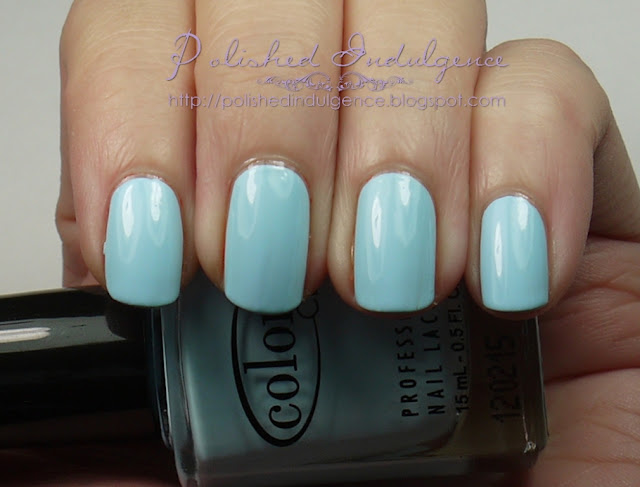 Artificial light/No top coat/No flash
It was overcast and rainy when I took these photos but this came out pretty well and the most color accurate of the bunch, to be honest.
It has to be said: the formula on this pale blue is ridiculously pigmented (and shiny by itself)! It was such a pleasant surprise. Pastels tend to be streaky on the first coat and then even out after one or two more, but this baby was almost a one coater! Amazing. The consistency leans a teeny tiny bit on the thicker side but it just means you're better off doing medium to thin coats rather than laying it on thick. You'll only need two coats at most, anyway. The brush works well with the formula, making application a breeze. Dry time was fairly quick, too, with it dry to the touch in about a couple minutes. 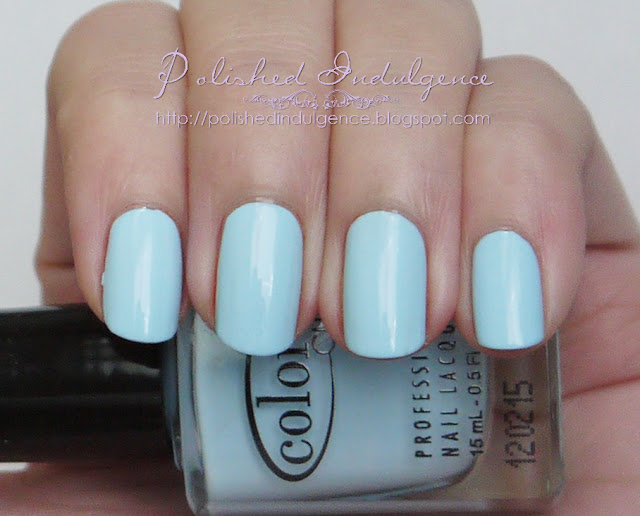 Natural light/Top coat/No flash
Not much of a difference with top coat, is it? 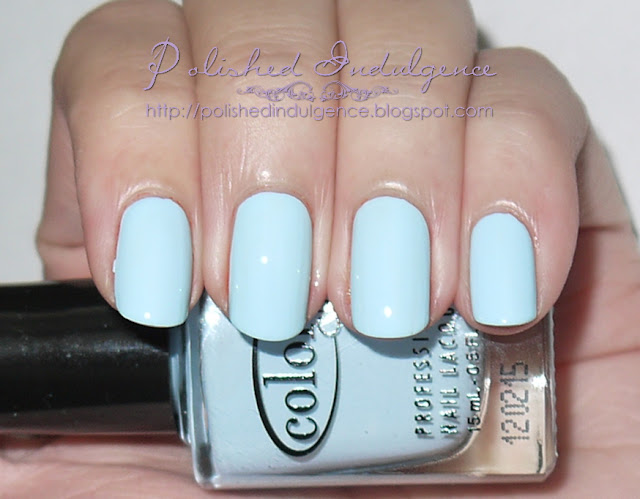 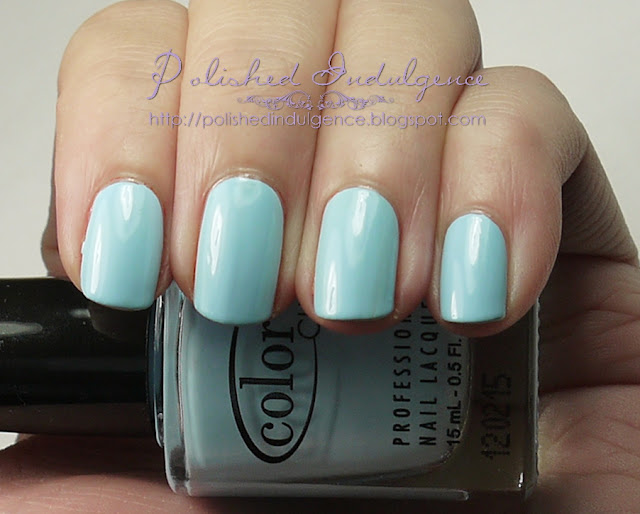 Artificial light/Top coat/No Flash
Hammie says: That artificial light works pretty well in the place of sunlight!
Top coat doesn't seem to matter as Take Me To Your Chateau already has such an amazing shine on its own.

Now, the trouble with cremes is that the chance of a duplicate increases exponentially. It's also possible that while the color is unique, the shade difference is so minute that it's practically indistinguishable other than to hardcore lacquerheads. I could rhyme out a bunch of pastel blues that I think might be a close match but I (surprisingly) don't have a lot of these pale blues so I can't really compare them. As far as I know, I don't have an exact match in my stash. Now, if you have a sizeable one, chances are you might have something similar. The one thing that does set this pretty blue apart from the other pastels is the highly pigmented formula. That alone will make owning this pretty well worth it, even if it's from an older spring collection, namely the Pardon My French Spring 2010 collection. It might be trickier to track down because of this, but that will mean the chance to get it for a lower price, too.

This won't be a Twin Post without nail art so I played around with a gradient stamping. I used one of the Red Angel plates the sweet Carolina (of Colores de Carol) kindly got for me. I'm thrilled to have so much more options to play around with, especially with the full nail patterns, but I just wish they were a bit wider as the designs don't fit my thumb. So until I master the skill of double stamping, my thumbs are going to be left out of the fun. Anyway, I used the full nail heart design on plate RA 114. To make the gradient, I used two pink foils from the Color Club Foiled collection: Hot Like Lava and Foil Me Once. I added some heart shaped glitter on the ring nail as an accent. 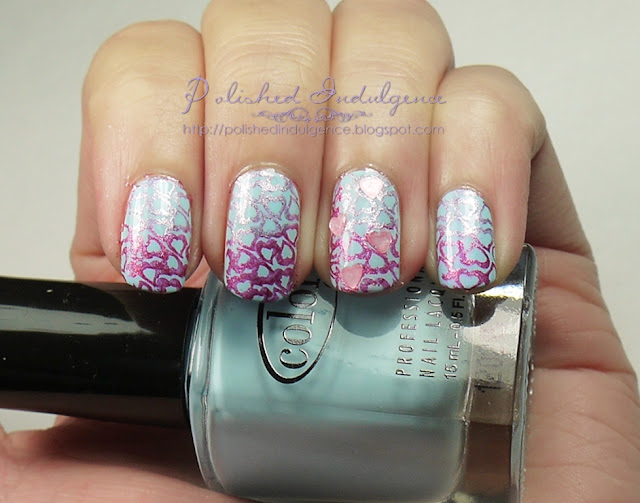 Forget double stamping, I still need to work on my actual stamping. (See that smudged bit? :( ) 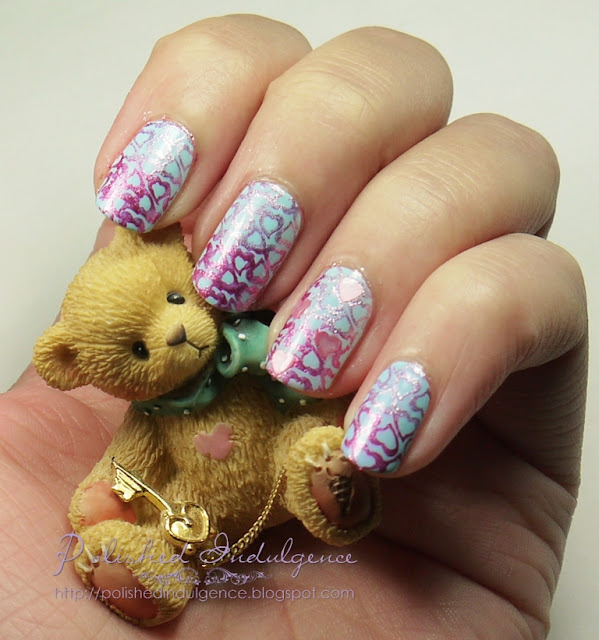 Thought it seemed appropriate as the bear had both blue (scarf) and pink (paws and heart!). 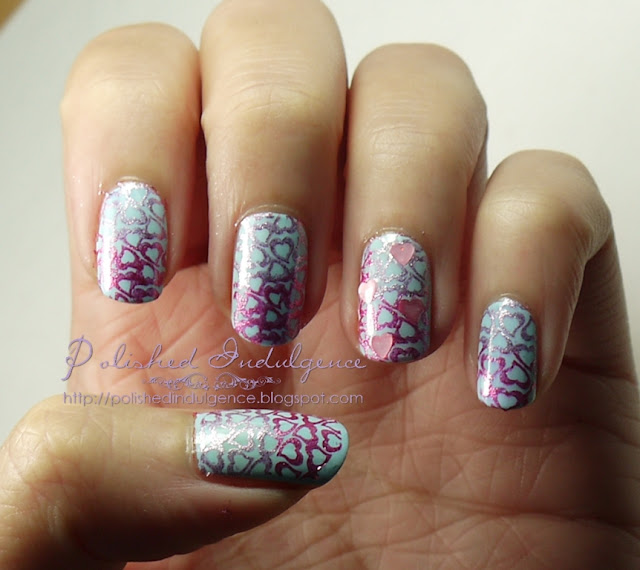 See how the design doesn't fit my thumb at all? (The gap's bigger on the other side.) 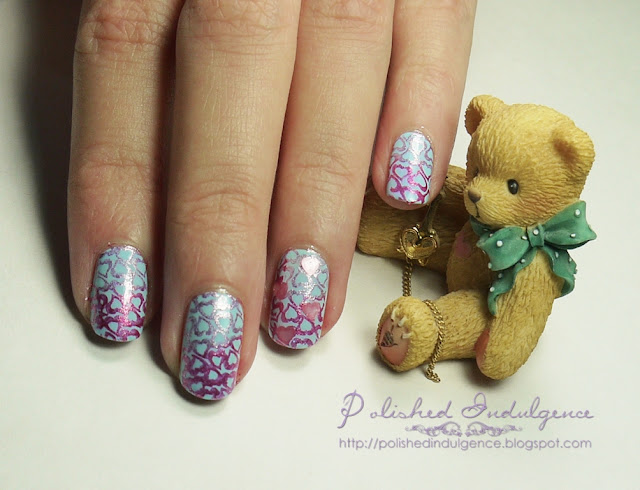 This turned out so well, I'm thinking of doing this again in February.
Hammie adores this blue as much as I do. He says the heart pattern really complemented the pale blue. (Aww, thanks, Hammie!) But more important to him is the dreamy formula that makes application really easy. Seeing how it practically applies itself, how can you say no to this blue? He scores Take Me To Your Chateau:

10 Hammie Points!
Have you seen Marta's take on this pretty blue? Head on to Chit Chat Nails and show her some love! Is this blue driving away your Monday Blues? What's a surefire way to get you motivated at the start of the work week? Are you a fan of pastel colors?
Posted by Carmela at 7:00 a.m.