And so we finally (and a little sadly) end our twin posts with the always amazing Marta of Chit Chat Nails with the last but most definitely not the least of this previously unnamed Color Club set: a perky neon seafoam green. I was a bit unsure how I felt about this strangely hard to place color (it sat somewhere between the green and teal in the color spectrum, but where exactly is quite the mystery). Again, if it weren't for the set, I doubt I would have gone for this particular shade as I like my neons retina searing. This one isn't as bright, but it's still very much brighter than most: 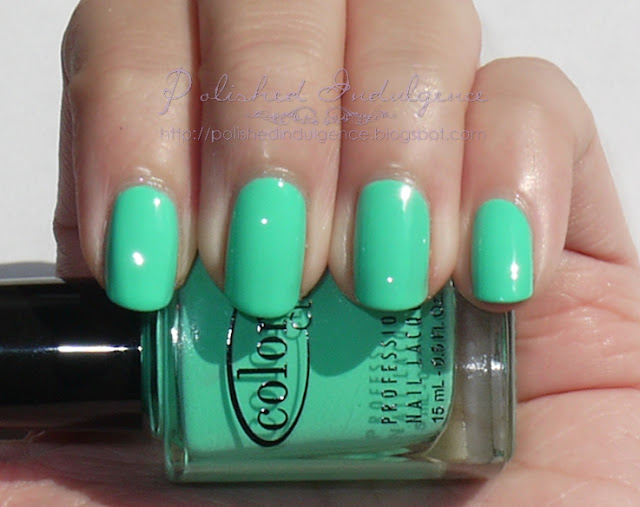 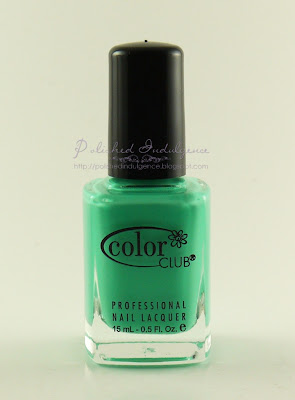 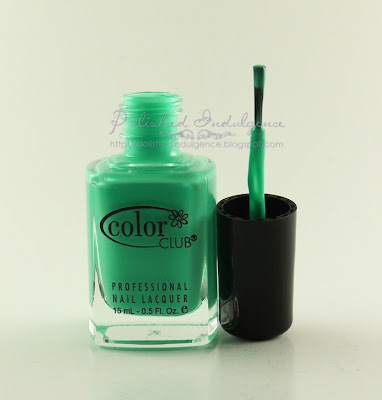 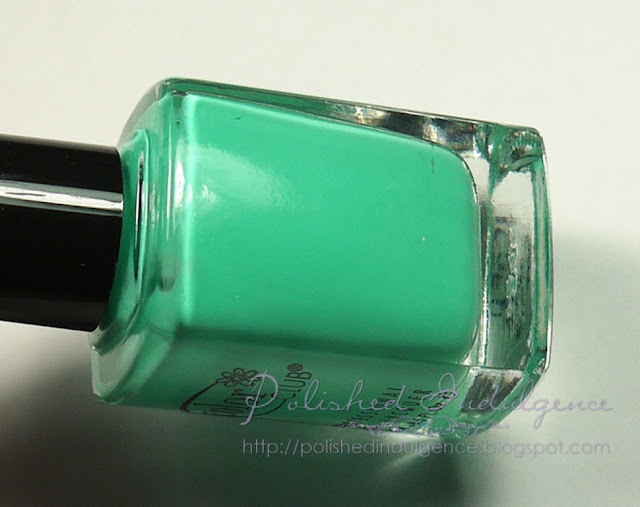 I'll be honest. I totally struggled with how to describe this color. Most colors are generally straightforward and tell you exactly what they are at first glance. There's the warm or cool toned pinks, the blue or orange based reds, the list goes on. But for this particular green, it toes the line somewhere between mint green and teal. It had a touch of blue to an otherwise primarily green base, but not enough to be called turquoise and too much blue to be called mint green. The closest I can get is seafoam green (like this pretty sweet Strat) or Caribbean Green (at least according to Wikipedia and my trusty laptop's screen). To make matters even more difficult: it's a neon. You know how most cameras have an innate aversion for capturing the true colors of neons (it's like a horrible, horrible conspiracy). So all my photos lean a lot more green than it actually looks in person. Think neon China Glaze For Audrey but more green leaning. Does that make it easier to picture? Anyway. Suffice to say it's a pretty awesome color and just take my word for it. (When have I ever lead you astray?)
***All nail swatches were done with Nail Tek II Foundation Base Coat and two coats of Color Club Edie unless stated. 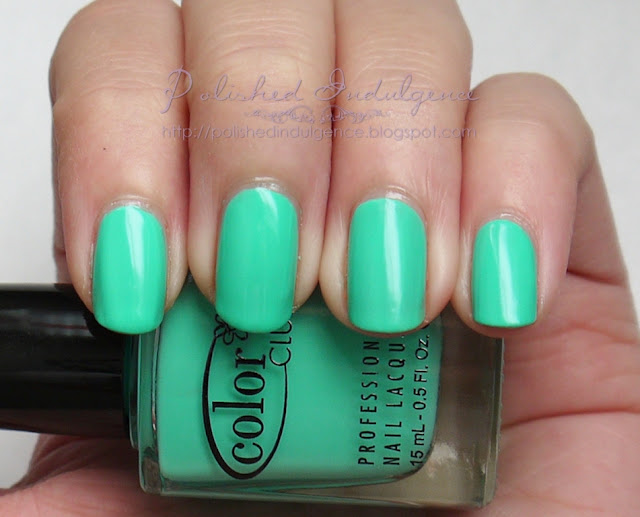 Natural light/No top coat/No flash
Notice how you see the ghost of the nail line? It could've probably used another coat. 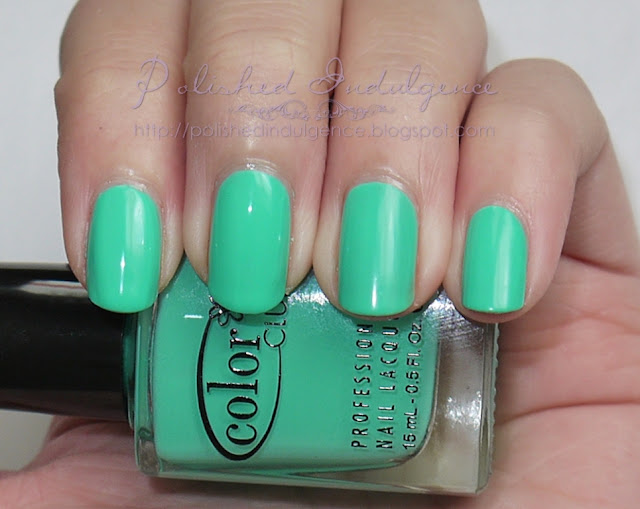 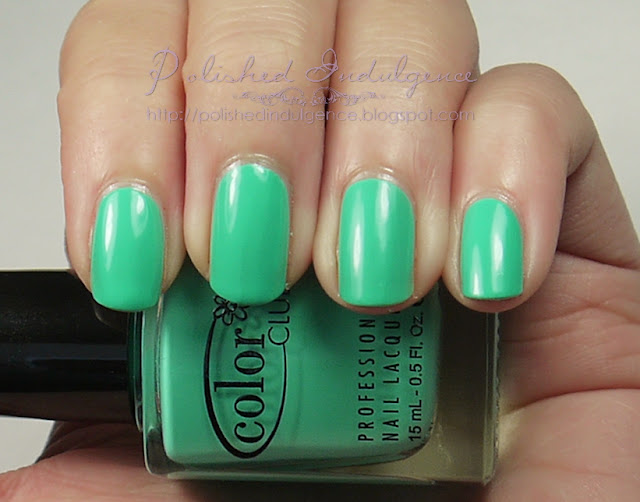 Sunlight/No top coat/No flash
As neons are wont to do, it dries quickly to a satin finish.

Typical of a neon, the formula was predictably runny. Yep, we're talking thin to the point where I warn you against having too much polish on the brush so you don't end up flooding your cuticles. That being said, thick coats are a no-no. Best to apply thin coats with this one. Luckily, the brush works fairly well given the runny consistency and fanning out nicely to lessen the need for extra strokes for full coverage. The upside is Edie does dry really fast so even if you'll need an extra coat or two, you won't have to wait long. You'll also want to lay on the top coat to add more shine to its satin finish. 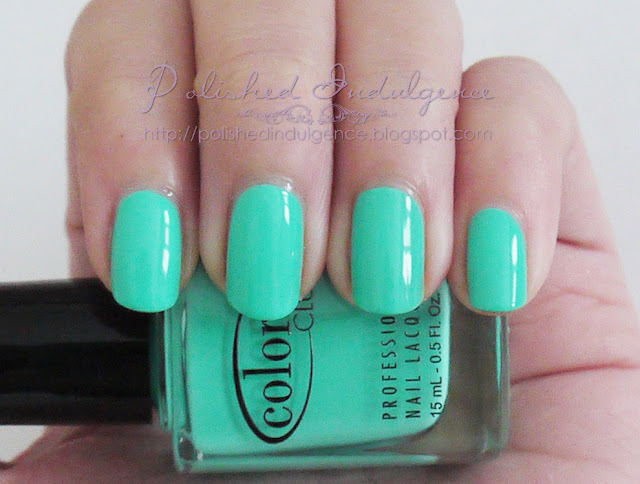 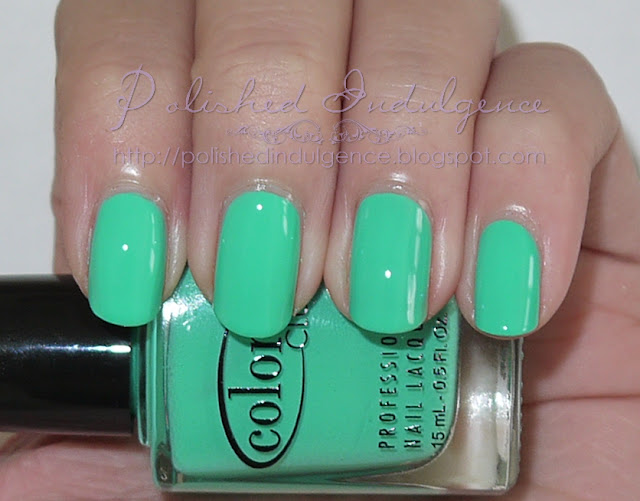 Natural light/Top coat/Flash
Hammie says: I do like it better shiny! (Okay, so maybe I'm biased...) 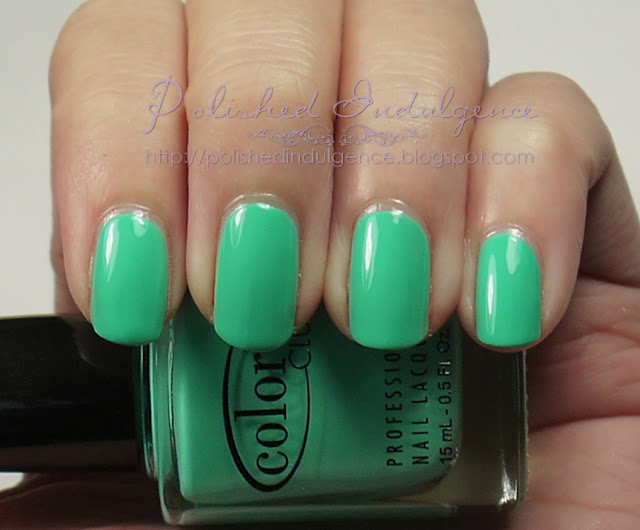 Sunlight/Top coat/No Flash
Hammie says: This is such a bright, fun color! Especially perfect for the warmer months!

A good layer of top coat goes a long way with Edie. Just look at how it comes alive with it!

I looked for duplicates. I honestly did. But the trouble with neons is that they never photograph exactly how they look, so comparing swatch photographs that are somewhat inaccurate can never lead to conclusive answers. Basically, that's my long-winded explanation why I couldn't find any possible matches for Edie. The closest might be Color Club Age of Aquarius and we know Color Club would never dupe themselves. So while they're close, they're definitely not exact replicas of each other. That would be just...strange. In my collection, only Barielle Do Unto Us comes close and even then, it's a far reach. Do Unto Us isn't even a neon and has more blue to it. Now, if you have an overwhelming need to own this particular shade, I suggest stalking any place that sells Color Club. As far as I know, it's not limited edition as you can even purchase it directly from the Color Club website for $8.00 USD. You'd never catch me paying that much though if I know I can get these sets of 7 polishes for $14.99. I'd rather be one of the late adopters and get the colors for cheap at big box stores like Winners than pay full price to get them now, and especially not for a color that was originally released two whole years ago. Seeing as it's not a limited release, I'd suggest hunting for it patiently if you'd rather not pay three times the price I got it for.

The nail art portion of today's twin post had a bit of drama involved. I'm not entirely sure that it's not because we weren't quite ready to end the twin post series (we're having way too much fun!) but like we did from the last post, we ended up with two different designs using Edie. Hammie thinks it's because we wanted the series to end with a bang. In truth, it was really because of a nail art fail. See, I tried my hand at doing gradient following Sammy's tutorial. It looked deceptively easy. All you needed was a sponge, a piece of plastic, two different nail polish colors and a bit of patience with clean up. Foolproof, right? Unfortunately, not Carmela-foolproof enough. Pieces of the sponge I used (it was a cosmetic sponge wedge) stuck to the nail! I didn't even notice till I started taking photos (that's what I get for not wearing my glasses while doing nail art). I belatedly read that some people suggest using a damp sponge. I'll give it another go (and if you have tips for me, please do tell in the comments!) but I didn't want to leave you with lackluster nail art. So I did another. 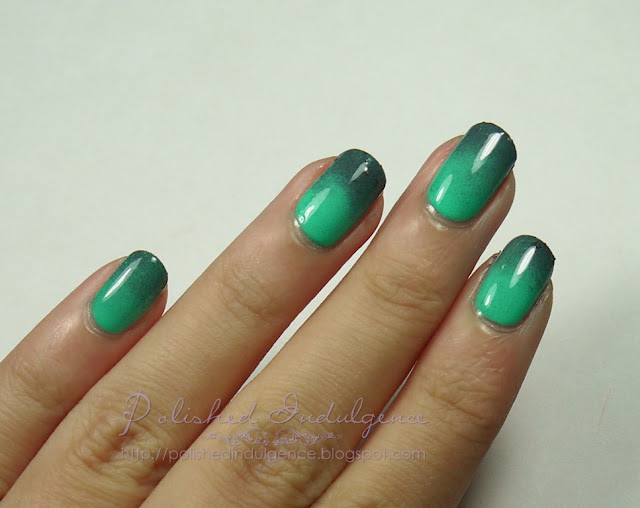 I still looooove how it turned out tho. I used Nina Ultra Pro Ink-ling for the gradient. 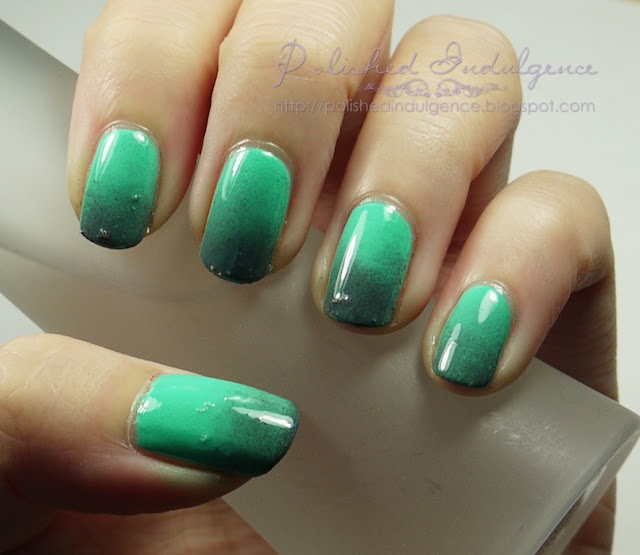 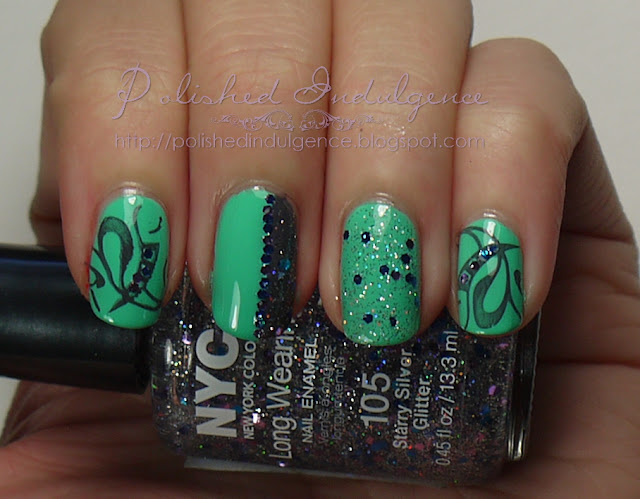 So using the same polishes, I stamped the index and ring using Red Angel plate #111 and glitterized using NYC Starry Silver Glitter. I actually picked out the hex glitter individually from the glitter polish and used a dotting tool to place them in the stamped design and in that vertical line on the middle finger. 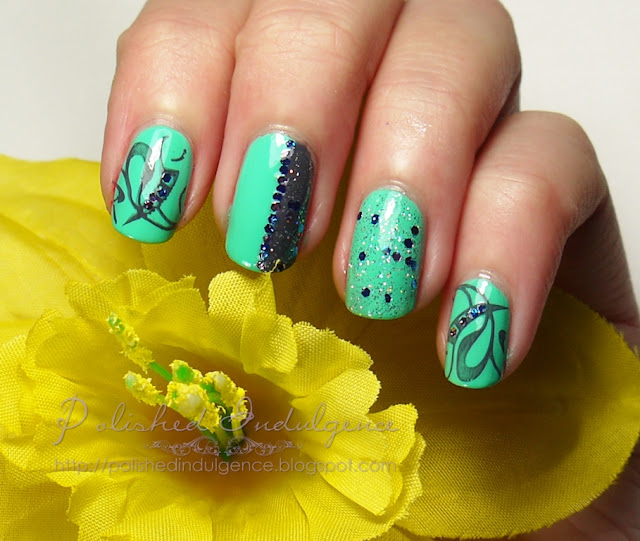 While I'm not entirely sure how I feel about this mishmash of designs in a skittle look of sorts but it sure does look interesting! 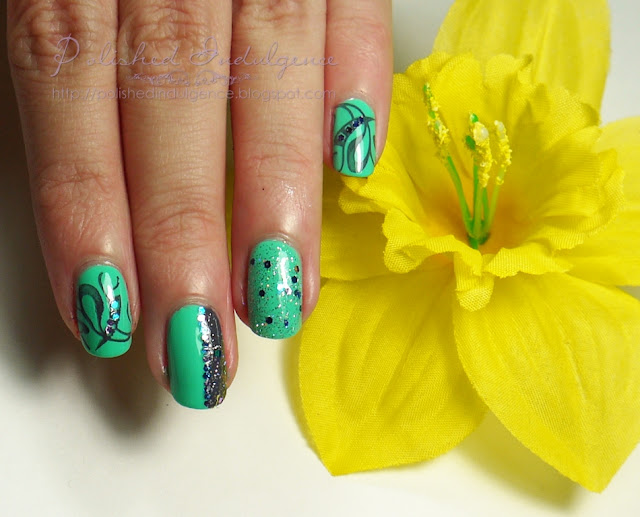 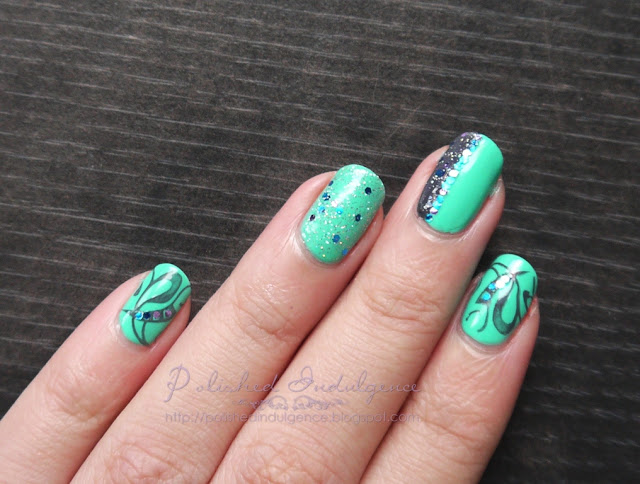 I guess you can say this is my attempt at edgy..?

Hammie isn't a huge fan of green but he did like the cheery brightness of Edie. He's already envisioning Edie related pedis in the somewhat immediate future! Despite that though, he was very concerned about the runny consistency of the formula and docked a point for it. The less than stellar coverage was another issue he wanted to address but the neon aspect won him over enough that he decided to let it go (!) much to Edie's relief. The final score is an impressive:

By the way, if you're looking for me on Twitter/Instagram, don't worry, I'm still alive! I've just been out and about so much that the only time I've had to sit down in front of the computer is the time I spend writing up the next post. It'll probably stay this busy in the next few weeks but I do read (and very much appreciate, I can't stress that enough) your comments even if I haven't quite gotten around to replying to them, sorry! The Indulge without the Splurge post is also a little late (I'm going to shoot for later this afternoon or early Saturday at the very latest) but it'll be up this week, I promise, so watch out for that.

Anyway, it's supposed to be reeeeaaaally nice this weekend and I'm stoked! I get to spend time with the Cutie Pie (aka my niece) and just enjoy the warmer weather. What do you have planned for the weekend? Do you tend to wear neon shades only during the warmer months of the year or would you rather reach for them any time you feel like it? Have you ever done nail art by winging it (as in no plans how the final look will be)? Would you re-do the exact same design if you messed it up the first time? And if you still haven't checked out Marta's take on Edie over at Chit Chat Nails, boy, are you missing out! In the same sense that Simon Says is played, Hammie says go say hi to Marta!
Posted by Carmela at 7:00 a.m.