Okay, so when I first got this unnamed set, it was mostly for the pretty pale blue that Marta from Chit Chat Nails and I decided was called Take Me To Your Chateau. Everything else was just a bonus. What I didn't know was that I'd end up falling in love with a few other shades in the set. Today's featured polish in our Twin Post series is one of them. It looked deceptively boring what with its pastel-like color that looked practically white. But on the nail? It was perfection. This isn't your average neutral, either, just take a look at that: 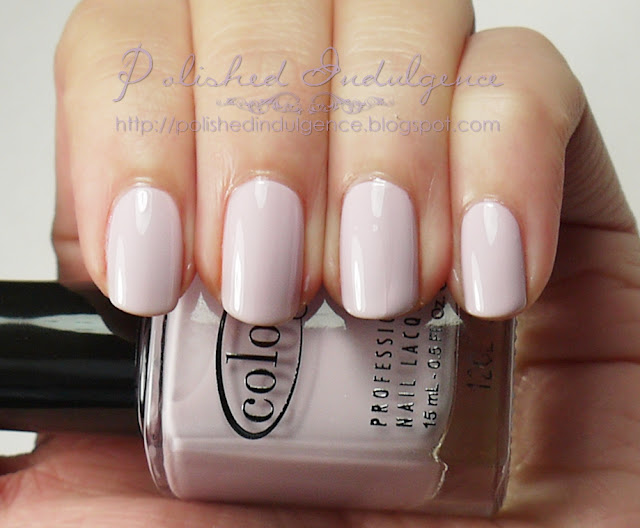 Now, tell me how you'd describe that color.

Brand/Name: Color Club Who Are You Wearing?
Color: Cream with a touch of gray and lilac
Finish: Creme
Price: $3-8CDN for 15mL
Seen at: Nail Polish Canada, Trade Secrets, Winners (as part of an unnamed set; seasonal availability) and wherever Color Club is sold.
Note(s): Who Are You Wearing is from the Color Club Rebel Debutante Spring 2010 collection. 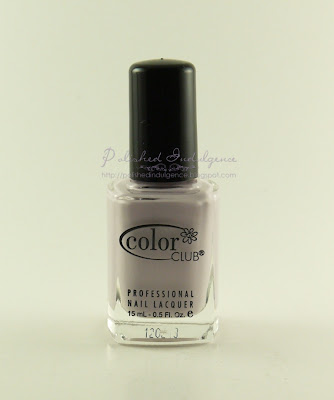 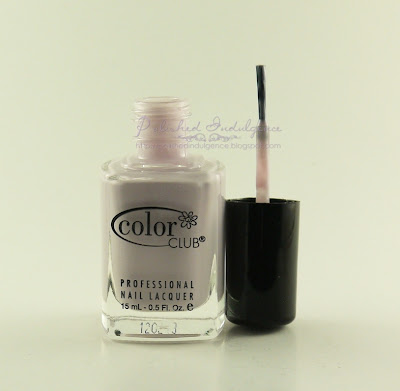 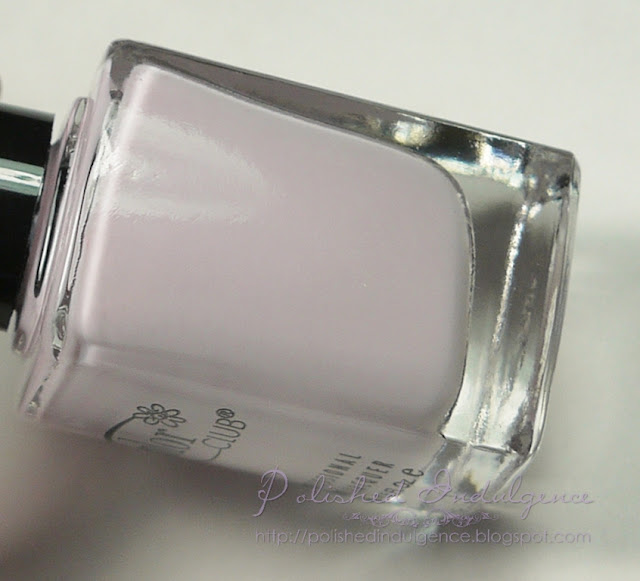 I completely adore how clean and crisp this looks on the nail, just like a proper white would look, except without the chalkiness and brightness of a full on white. The gray and lilac tones bring coolness to the overall tone of the cream base color, making it more wearable (for cooler toned me, at least) than a plain cream. It also adds a dash of edginess to this neutral/nude without the usual brown tones. With a super shiny finish even without top coat, I fear Earthy Angel might just be bumped down to 3rd on my top 5 favorite neutrals! (For the curious, OPI Tickle My France-y is my #1.)
***All nail swatches were done with Orly Bonder Base Coat and two coats of Color Club Who Are You Wearing? unless stated. 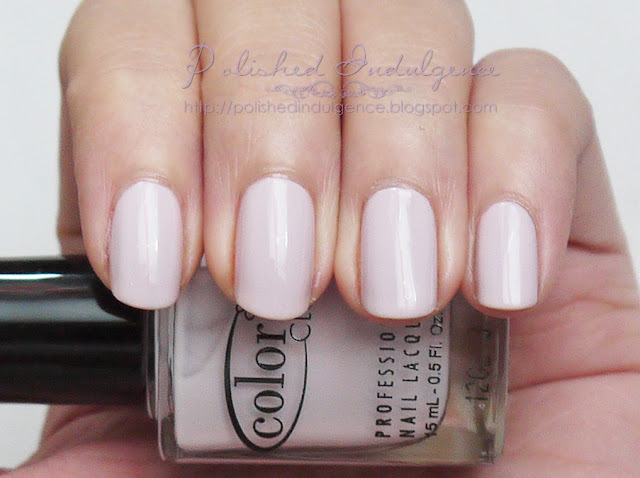 Natural light/No top coat/No flash
See what I mean about how *clean* it looks? 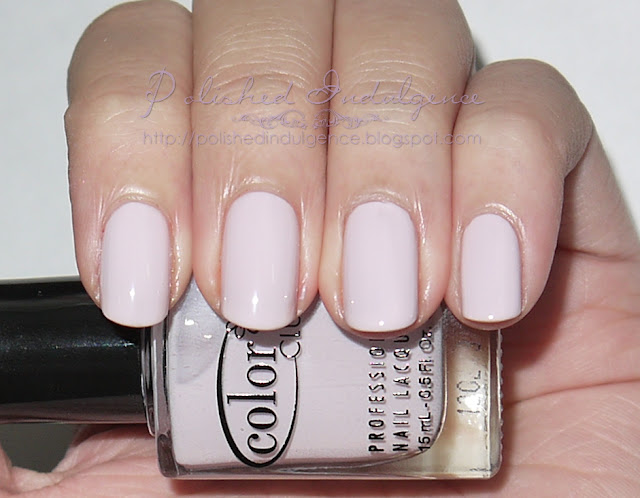 Natural light/No top coat/Flash
The flash washes it out some. 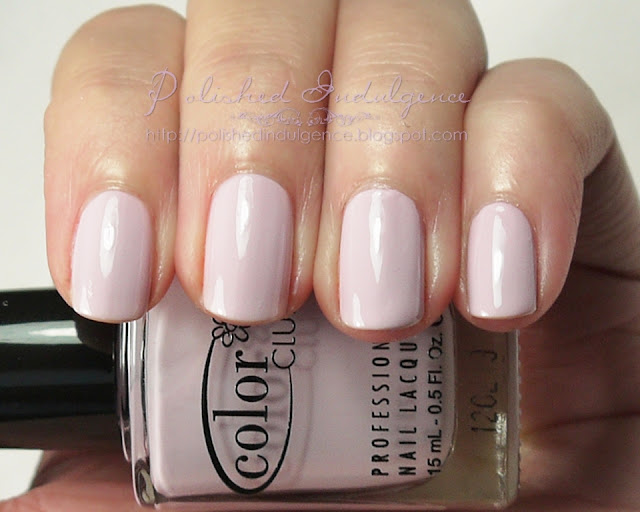 Sunlight/No top coat/No flash
The most true to color of the bunch.

I thoroughly expected Who Are You Wearing? to be on the sheerer side in the same vein as Pardon My French was, so I used with slightly thicker coats. What you see in the swatches are 2 medium to thick coats. If you tend towards thinner coats, three would suffice to give you full opacity. The formula flowed nicely, albeit a tad thick though nothing that was unwieldy. In fact, it applied easily and precisely with the thin brush and its nicely flexible bristles. Time to dry is as what I have come to expect with Color Club nail polishes: relatively fast and clocking in at about 5 minutes or less to be dry to the touch. 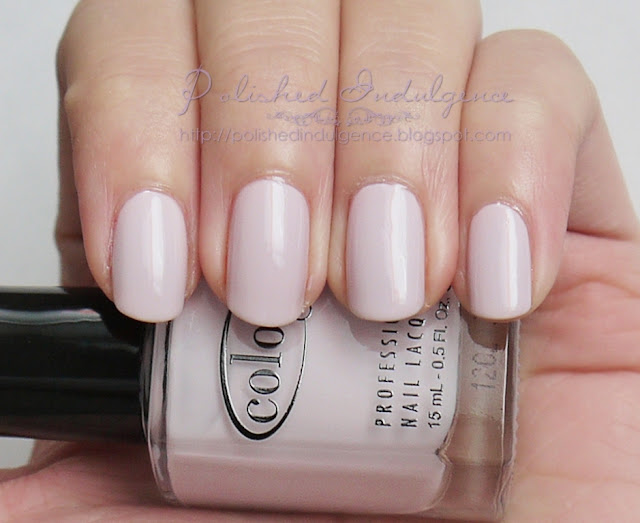 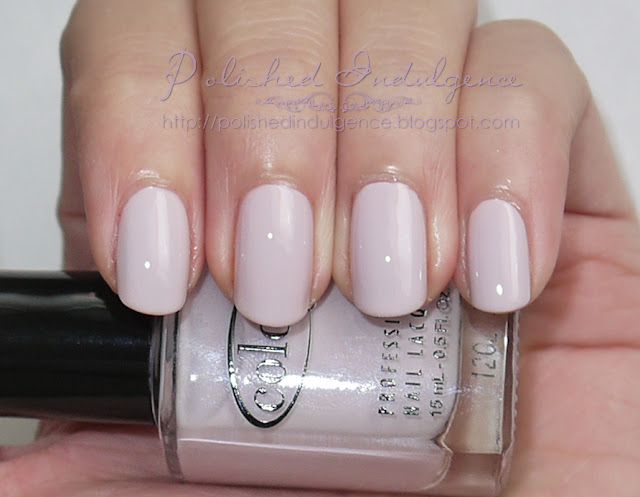 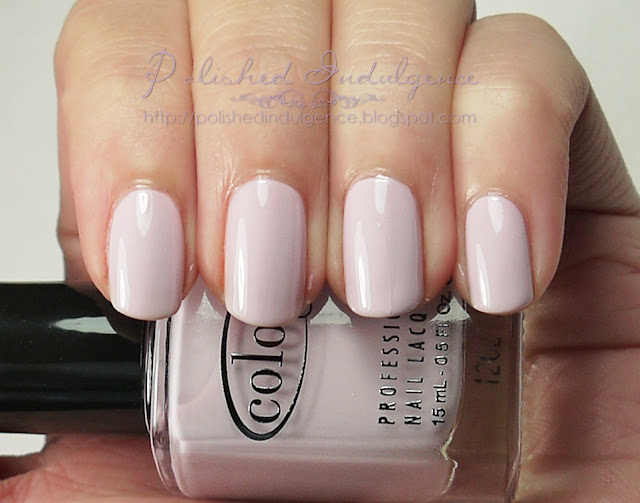 Again, top coat doesn't really add much to Who Are You Wearing? as its innate shine needs little to make it even more stunning.

I looked high and low for possible matches in terms of color and I was surprised to find quite a few options! Now as a disclaimer, I don't own any of these to compare so I have had to depend on other blogger's swatches of these nail polishes. As far as I can tell, they all seem to be almost dead on duplicates of each other, but don't quote me on that. If I ever do get my hands on any of these, I'll update this post accordingly or do a separate comparison post (or if you have any of them as well as Who Are You Wearing, I'd love to hear your input in the comments!). Essie Body Language is one of the first I saw. It does have a very slight tinge more grey to it, but for all intents and purposes, especially to an undiscerning eye, they could be dupes. MAC Light Affair is another contender, along with BB Couture Intake Valve (which I've read is the MAC dupe) and Models Own Utopia. The shade variations for all are so very slight that you'd have to really look closely to see any difference, if any. All four have the same grey and lilac tones with a cream base that make for this strange putty like color that Who Are You Wearing? has. I'm not entirely sure about availability as I know MAC polishes aren't usually the easiest to get a hold of (I'm not entirely certain if this is part of the core collection to be released later this year). Essie Body Language is from a 2008 collection so I think your chances of getting that might be even slimmer. If you live across the pond, Models Own Utopia is available as part of the core collection and can be bought for £5 (or buy 3, save £3, or buy 5 say £7). They do ship internationally so if that`s easier for you to get a hold of than this Color Club, it's definitely an good option to have. BB Couture Intake Valve is also readily available on their website for $9.95USD (I apologize profusely in advance for the feet swatches, it's on THEIR website!) so there's another option right there. Color Club is still likely the cheaper option but it's always good to have others if availability is your concern.

I thought that the almost dusty quality of Who Are You Wearing? gave it such a quiet and unassuming almost regal air to it that I decided to go with a princess-y look for the nail art part of the Twin Post. I sponged on Sally Hansen Diamond Strength Aisle Be There (a pink fine flakie top coat) on to the tips to bring out more of the lilac tones, followed by a another sponged on layer of fine holographic silver glitter, Sally Hansen Ceramic Lengths Silver Slightblade. I then took some rhinestones from Born Pretty Store, pale pink heart-shaped ones and iridescent ones, and placed them on the ring and thumb nails as accents. 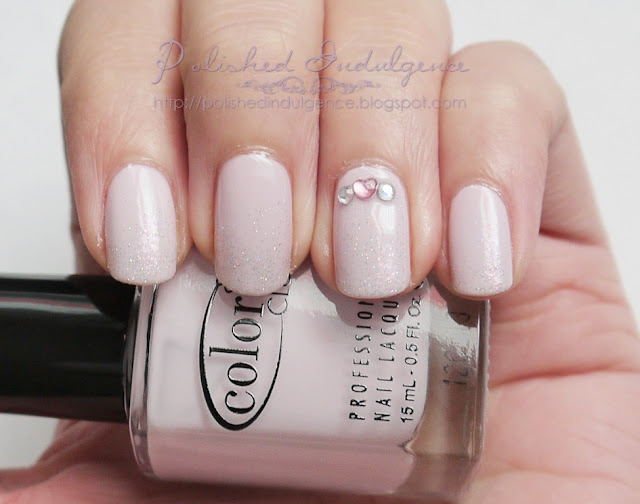 The pink flakies were a bit hard to capture. 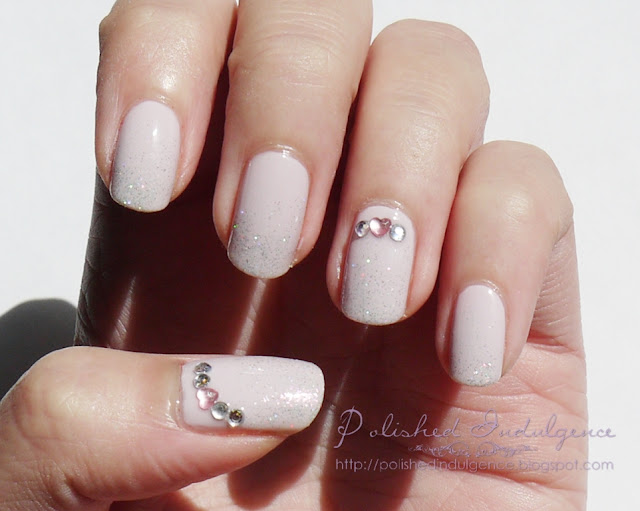 This might well be one of the girliest and possibly the most prim and proper nail art I've ever done. Ever. 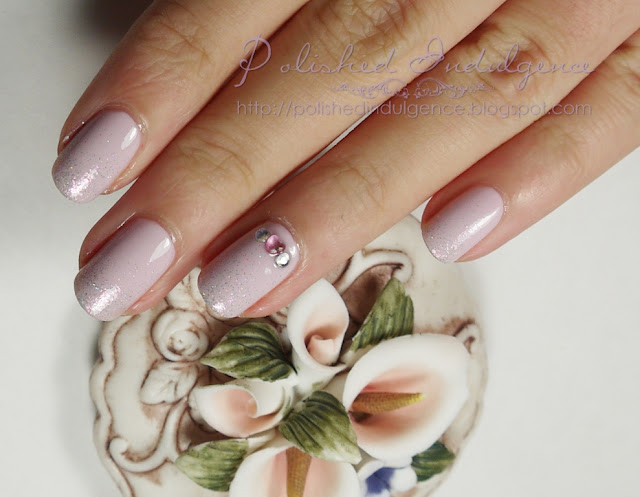 Here you see more of the pink flakies from Aisle Be There on the tips. 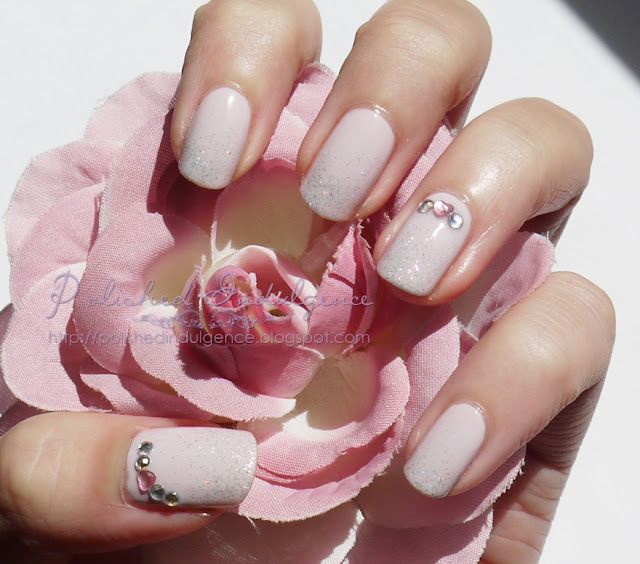 Hammie says: I love how delicate this looks! 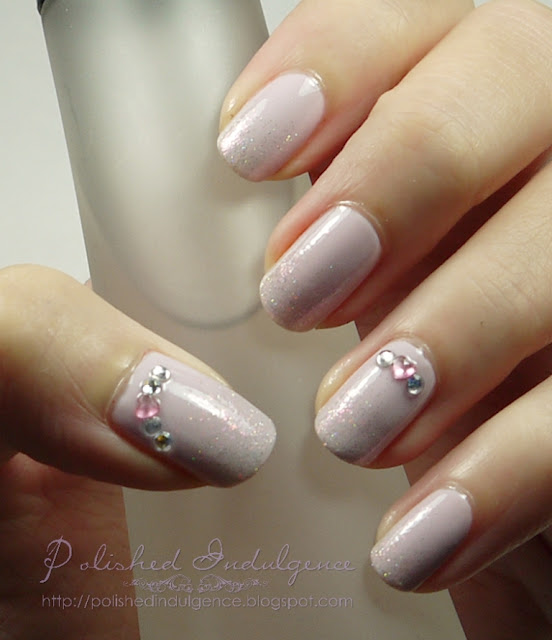 As much as Hammie enjoyed the most unusual shade of Who Are You Wearing, he was more than a little appalled by how it wasn't as unique as he thought. He does enjoy having options in different price ranges, as well as to address possible availability issues but a unique color would have been all the more better in his mind. Because of this, he ended up docking a point from the total score, giving Who Are You Wearing a still very impressive:

And just like that, it's Monday yet again. I'll be doing some last minute scrambling as the in-laws arrive tomorrow. I honestly have no idea how clutter seems to have a life of its own; it just never seems to go away! While you're here, why not head over to Chit Chat Nails to see how Marta wore this color! I hope your Monday is treating you well as a great start to the week always signals and awesome week ahead! Are you a fan of unusual neutrals? What's your absolute favorite one? Would you wear this rhinestone adorned nail art?
Posted by Carmela at 7:00 a.m.