Earlier this week, I mentioned a coral comparison that I would be doing with Sally Hansen Salon Mangoes Loco. I would normally lump this in with the actual post but it's such a close call that I thought it deserved it's own time in the spotlight. (Besides, I didn't want the one post to be way too lengthy.) I honestly didn'teven  realize how close these three were until I had brought them home on separate occasions. Does that ever happen to you? Gravitating towards a particular color then coming home to realize you had 2, 3, even 5 others that look almost the same? Well, once I swatched Mangoes Loco on a nail wheel, I knew for sure that it reminded me of another color I had. Which in turn lead me to another one. And so here we are, comparing three corals: 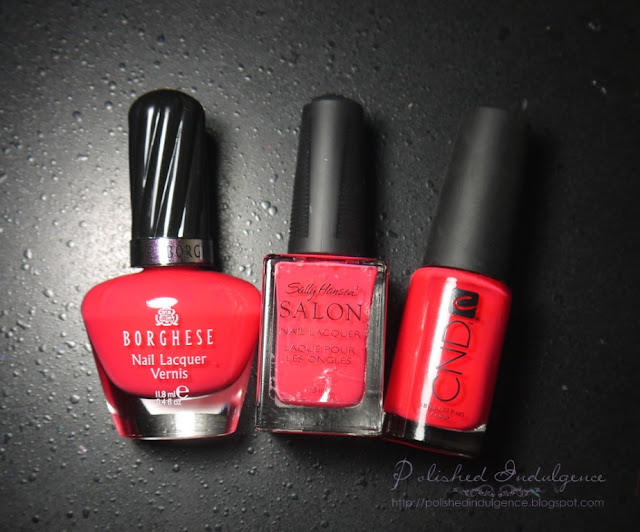 Before we jump to the actual comparison, let's take a look at each on their own. I had to be a little creative with this as I would normally do a nail swatch with the nail polish bottle just to show how the color looks on the nail compared to what you see in the bottle (I'm sure you know that not all polishes are created equal and some dry a shade or two darker than the bottle color). I didn't realize I missed taking these particular photos until I started to draft this post, so I ended up using a nail wheel swatch instead. It's not that much of a difference as I feel it affects opacity more than the actual color. Anyway, here they are with the bottle shots: 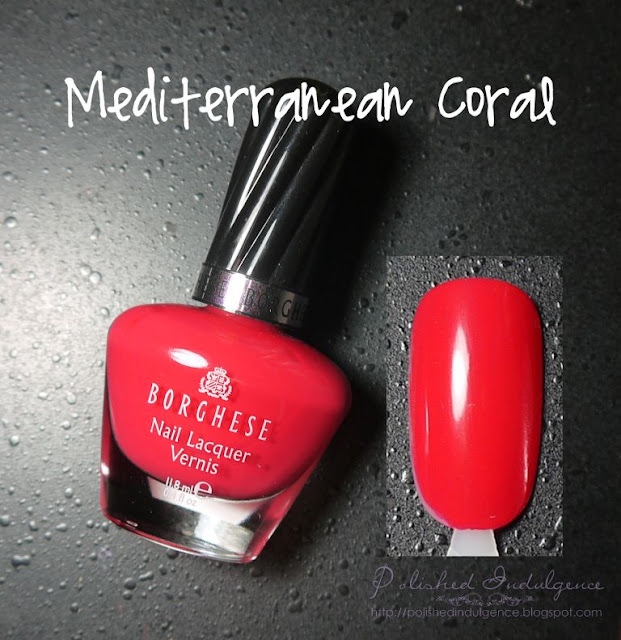 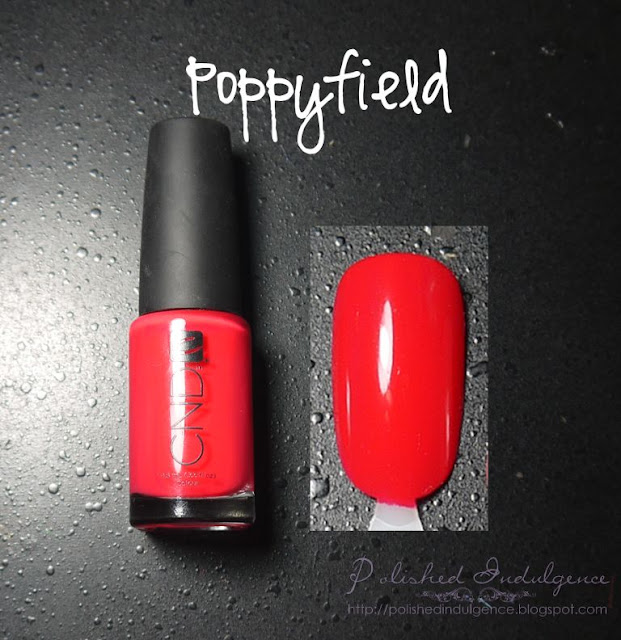 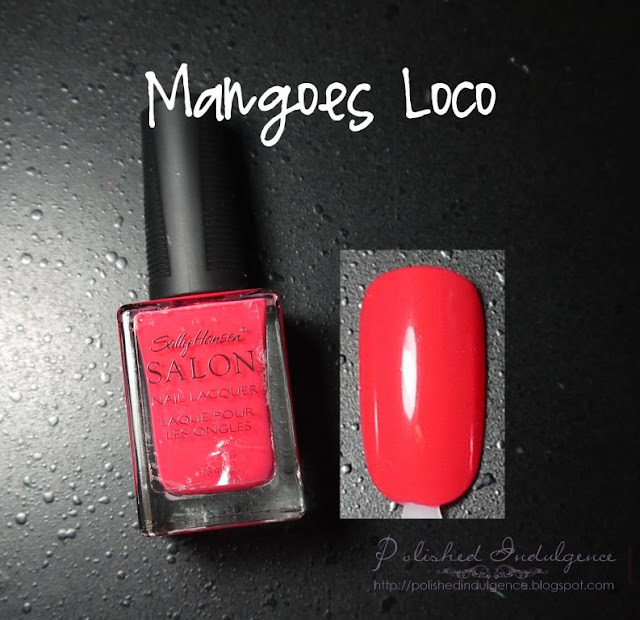 Relying only on bottle color, I would've thought that Borghese Mediterranean Coral is an exact duplicate to Sally Hansen Salon Mangoes Loco. This is why using actual color swatches (may it be with an actual nail or a nail wheel) is often more accurate than just comparing based on what you see in the bottle as you can already see the slight differences between the two. CND Poppyfield is, by far, the brightest and more red leaning of the three. Now, let's compare how they stack up in various light settings: 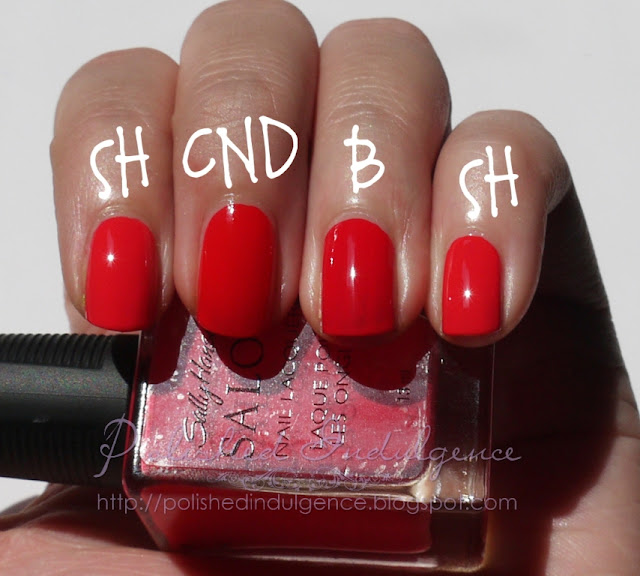 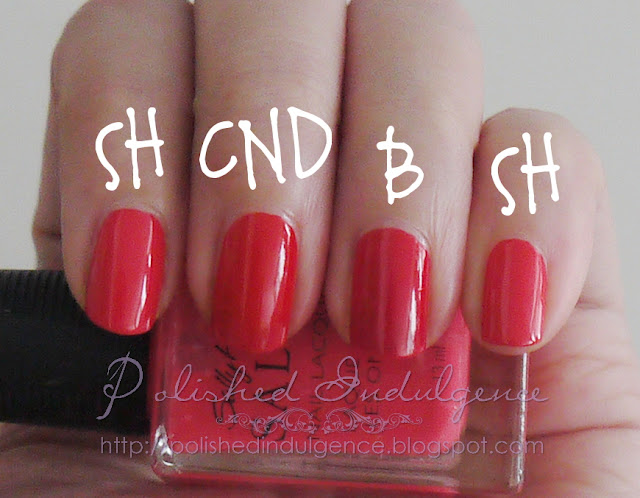 Natural light/No flash
Under natural light, the differences don't seem as obvious although Poppyfield (CND) still reads the most bright amongst the three. 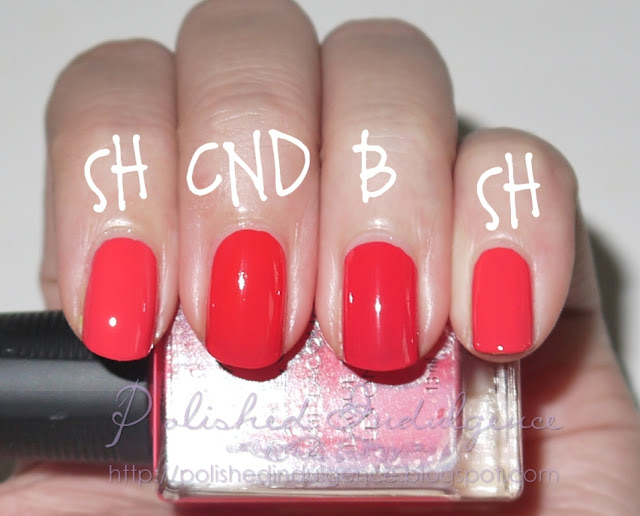 Natural light/With flash
Doesn't Mangoes Loco (SH) look the creamiest of the cremes? It has this milky quality to it that flash brings to the forefront. Mediterranean Coral (B) comes a close second but it lacks the almost pastel-like softness that Mangoes Loco has and looks like a closer match to Poppyfield (CND). 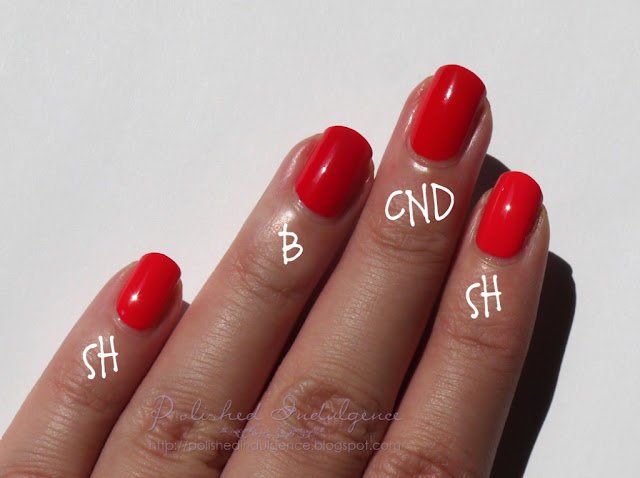 Sunlight/With flash
You really have to take a close look to see the differences here, as they're not as obvious as in other light settings. Heck, at first glance they all looked the same, even to me!

While I can't in good conscience call any of these three dupes, they are very similar and vary only slightly. Mangoes Loco is the lightest of the three and has a milky quality to it that the other two lack. Poppyfield is the brightest and most in your face of three. It is also the warmer leaning of the pack, with its brighter orange tones. Mediterranean Coral is the happy midway between the other two and looks to be a shade darker than Mangoes Loco and more red leaning than orange leaning unlike Poppyfield. As for application and formula, Poppyfield had the best brush while Mediterranean Coral was the most opaque (almost a one coater!). But Mangoes Loco trumps the others in terms of value for price as I got it for only $1 for 13mL (also the most product you'll get among the three). Mediterranean Coral was also purchased at a warehouse sale for $1 but you only get 11.8mL of product. Most expensive is Poppyfield that I purchased for $6.50 (or thereabouts) from Nail Polish Canada (looks like they're running low on CND items at the moment, though) for only 9.8mL of product. At the end of the day, if you're really after a coral such as these three exhibit, I honestly think it'll boil down to availability. Two of these are from what looks to be discontinued lines that you'll have trouble locating in brick and mortar stores (the two I got from warehouse sales), while the other might be easier to track down in online e-tailers.

But the biggest question remains: do you need all of these? Gosh, NO. You'll be set with one or the other. I'm fairly certain there are other similar shades from other brands, as well. I just haven't included them as these three are the only ones I had in my stash. This is, after all, not the most unique coral shade out there. I'm not even sure how I managed to get these three so close to each other, but I'm starting to think that as the collection grows, the chances of acquiring dupes (or would be dupes) increases exponentially. It's a sobering thought, and one that keeps me from getting too much polish in one go.

Happy Friday! Woohoo for the long weekend! Are you headed to cottage country or doing anything special for Canada Day? We might just stay close to home but I'd love to see some fireworks again! I'm also still battling the bug I talked about earlier this week, but I finally got me some antibiotics so I should be kicking it's terrible behind sooner than later. Being sick is no fun, more so on a long weekend! Will you be sporting any patriotic nail art? Which of the three corals featured in this comparison do you prefer? What's the one color you have the most of in your collection?
Posted by Carmela at 7:00 a.m.

Email ThisBlogThis!Share to TwitterShare to FacebookShare to Pinterest
Labels: Comparison