When people say that you shouldn't forget to get yourself a gift for Valentine's Day, I kind of took that to heart. But I didn't want to splurge or anything as I'd already been going crazy with nail polish accumulation that started late last year. I've been trying very hard to scale back some but the collections that keep coming out, one after the other, make it even harder to do so. But when I got the email from Julep about a mystery box that would have a total value from $60 to $200 of Julep's Best Sellers for a mere $20, I was sold. That's like getting 66.67% off at the very least! I wasn't even banking on the $200 part. It was also just as well that I skipped February (I wasn't too keen on getting the gold glitter or the hair top coat) so I could get the mystery box without feeling guilty of spending double for the month. But imagine my excitement when I got a bigger than usual box (warning: pic heavy post ahead!): 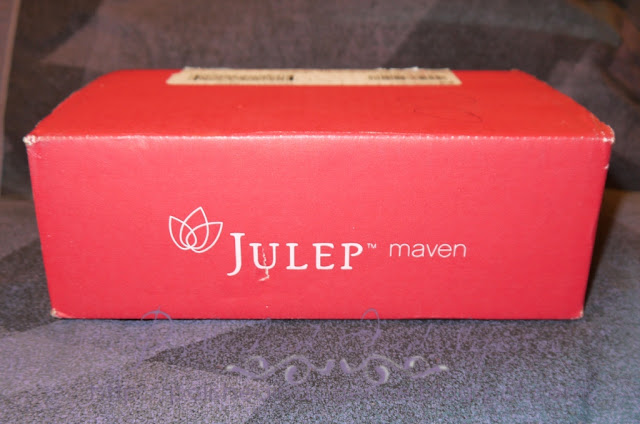 And red for Valentine's! 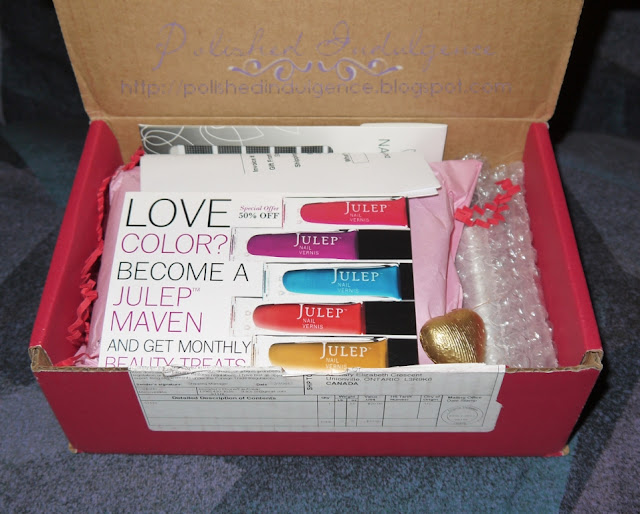 I opened the box to...pamphlets. And look, a gold chocolate heart! 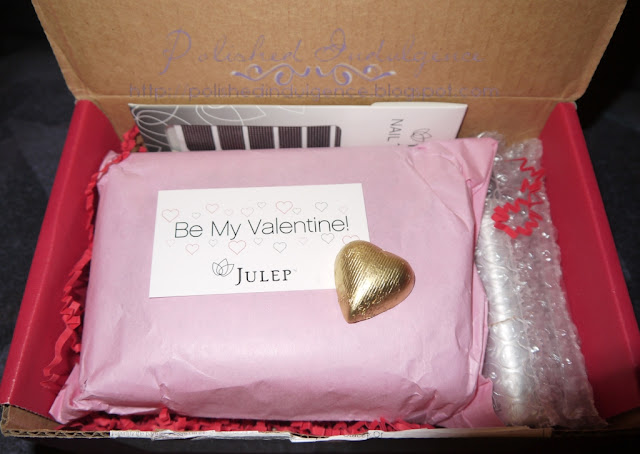 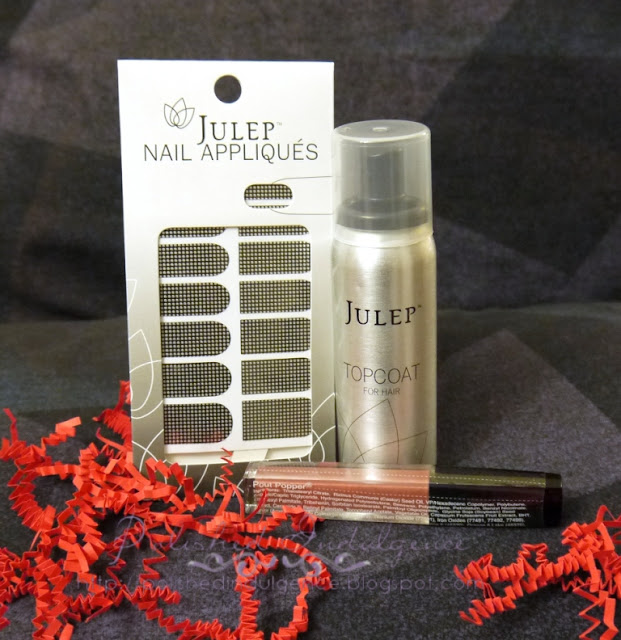 Ooooh. From left to right: Nail Appliques in Rivets, Top Coat for Hair
and Pout Plumping Lip Gloss in Arousal
The Nail Appliques are similar to the Minx, Incoco and other nail wraps. What's interesting about this design is how the silver rivets are raised against the black background. Very excited to try this! The Top Coat for Hair is supposed to act a lot like top coat for nails: add sheen and protect the hair. I was reading the directions for use and was pleasantly surprised to find that this works as a heat protectant spray, as well as a finishing product. I love multitasking products; perfect for travel! The Pout Plumping lip gloss is a nice neutral color that I can definitely see myself using. Not too keen on the plumping aspect tho. 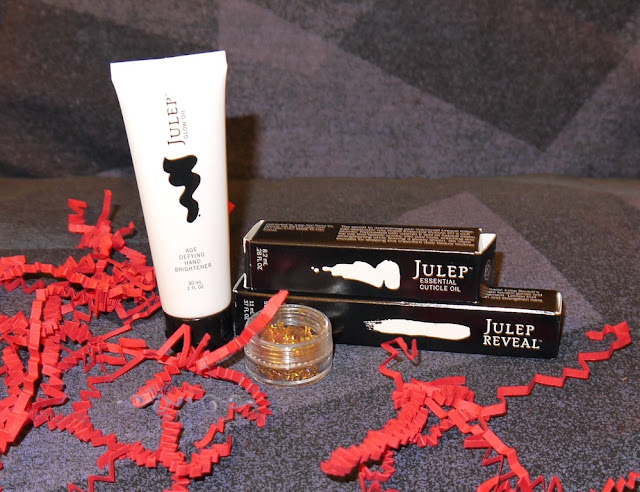 It gets better and better! From left to right: Glow On Age Defying Hand Brightener,
gold star nail art decals, Essential Cuticle Oil, and Nail Growth Revitalizing Serum
I actually got the hand brightener in the January box when I first joined the program for only a penny (it was an awesome promo that I just couldn't pass up; if you're wondering why there's no unboxing post, I got so excited that I didn't even think to get the camera before I tore through the January box. :P). I've since given it to a friend who was looking for anti-aging hand products so this will allow for me to try it myself, too. Plus, since it's a travel-size, it'll fit perfectly in any purse. The cuticle oil is in a rollerball packaging that I absolutely think is awesome to take on the go, too. The nail growth serum I'm curious to see if it'll work for me and my prone to peeling nails, seeing as you're supposed to apply it to the cuticle area and the underside of your nails (which makes sooo much sense!) instead of on the actual nail to stop peeling/breaking. Will do an in-depth post on it once I've used it for a while. Now, those gold stars will definitely get some use with me, too! 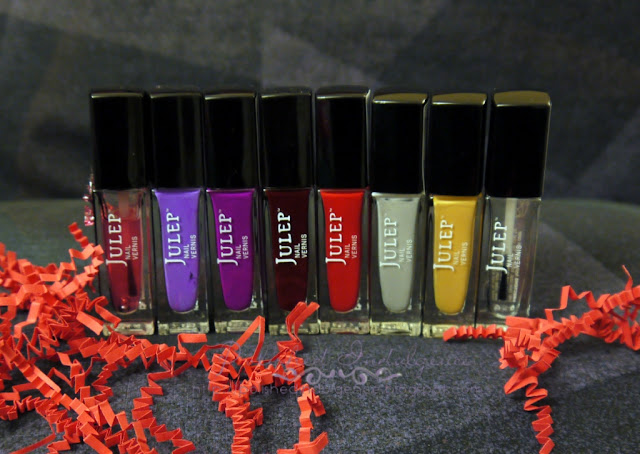 Let me introduce the girls, from left to right: Gwyneth, Anne, Helena, Demi, January, Shania, Stella, and Fast Dry Top Coat.
Knowing that you usually only get two polishes every month (or 3 if you choose the It Girl option), getting an eye-popping eight was pretty astounding! The selection was not bad either with a sheer pink, a very spring appropriate purple, a neon (!) fuschia, a vampy burgundy, a classic tomato red, a pale silver/champagne and a mustard yellow. But...notice something...off? 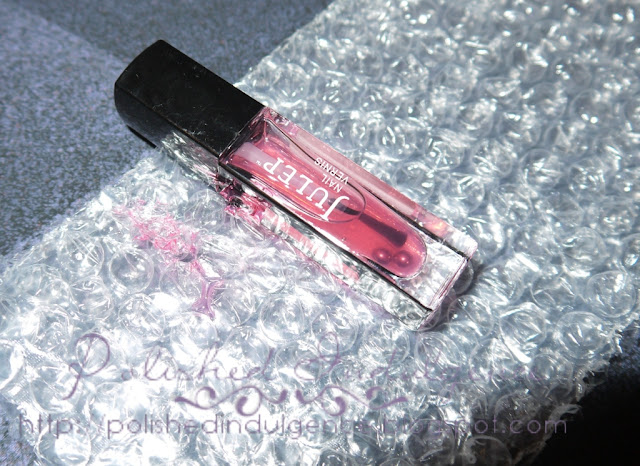 What I found after unwrapping the bubble wrap off Gwyneth. Is it...? 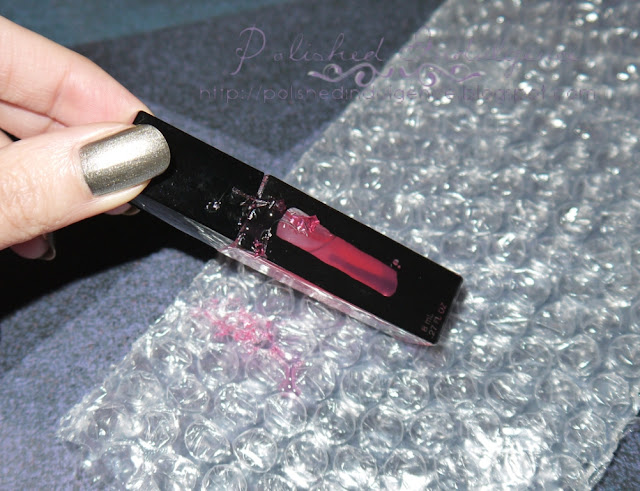 *gasp* It leaked in transit! *sad face*
(Hammie says: For the insatiably curious, Carmela is wearing Revlon Carbonite in this photo.)
I was pretty disappointed when I saw how much product had leaked out of Gwyneth. I immediately reached out to Julep and promptly got a response in less than 24 hours. That has got to be some sort of record, right? They promptly informed me that my replacement bottle was on its way and sent me a tracking number for it. No questions asked. Now that, my friends, is what good customer service is all about.
Now, have I even mentioned that $1 from each nail polish Julep sells is donated to charity that empowers women? And that you can have a say in which organization each month is chosen with your vote on their Facebook page? And that the CEO and founder, Jane Park, grew up in Toronto (word!)? And that I got allllll of these awesome goodies for just twenty bucks? Oy, Happy Valentine's Day to me!
I am smitten with the Julep Maven program. If you're a nail fiend and you're not on it yet, do yourself a favor and join already.
A note from Hammie: In case you noticed, we supersized the photos in the post. Do you like it better this way for all the other posts, too?
Did you get yourself a Valentine's Day gift this year? Have you tried Julep nail polishes? Are you more partial to supporting a brand with philanthropist leanings (gives to charity, etc) compared to one that isn't?
Posted by Carmela at 7:00 a.m.