As much as I love me some duo/multichromes, I hate reviewing them. Mostly because I can never seem to photograph them to the point where I can truly showcase the various color shifts that you see in person, and partly because trying to describe such a multi-faceted color can be difficult. But in the spirit of perseverance (and because Hammie insists I get over my aversion to reviewing a particular finish), we'll buck up and forge on as this readily available pretty is something any duochrome lover needs in their arsenal: 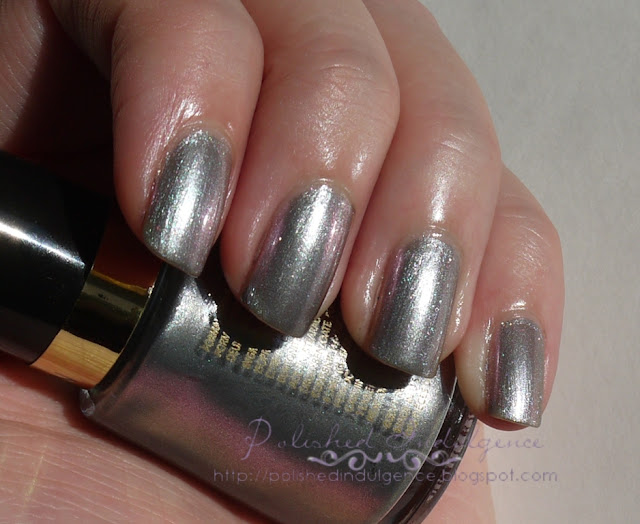 See how it looks green, lilac/purple and silver all at once? 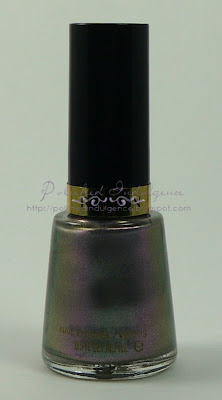 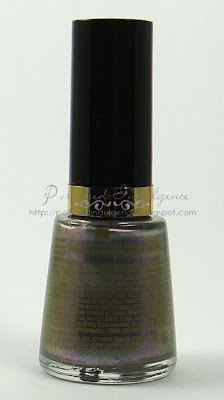 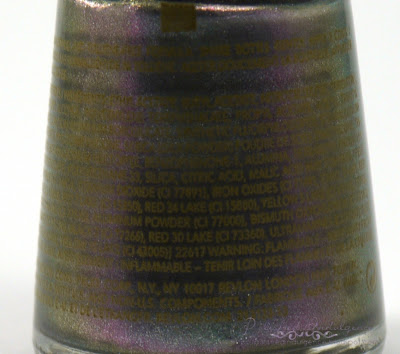 Inset of Ingredient list. (I know it's hard to read so I'll update this later on with a typed up version) 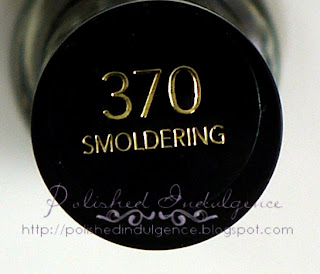 Name and number at the top. (I'm assuming this means it's part of the core collection..?) 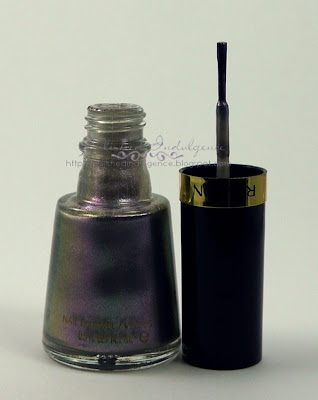 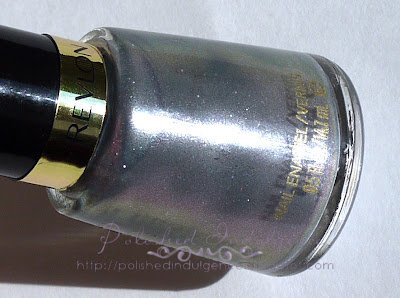 You see more of the tiny silver sparkles here, apart from the awesome duochrome action. 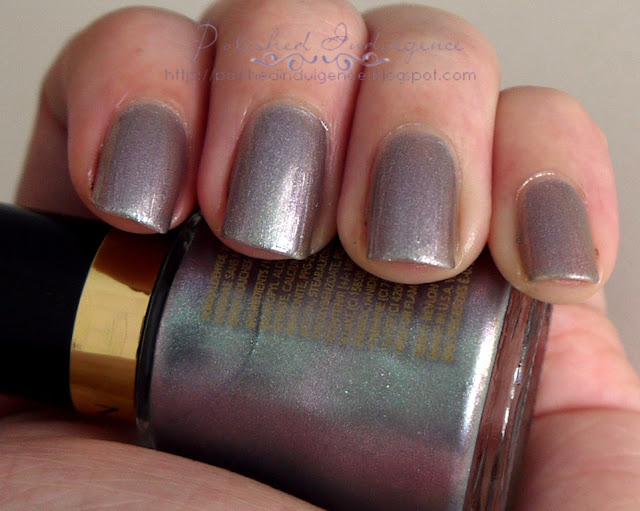 The best photo I had that showed (a lot of) the purple/lilac cast and some of the greenish tint.
I have since realized that one of the main reasons why trying to get a great photo of duochromes is beyond difficult is because the shift is usually strongest in low lights. It takes an insane camera to be able to get great photos in that kind of lighting and while my upgraded camera is pretty awesome, very low lights don't agree with it that well at all. Nevertheless, trust me when I say that this greenish silver base with tons of tiny silver sprinkles all throughout gets a purple/lilac cast to it in low lighting. Bright light usually just shows silver with some greenish hints to it around the edges. If you're lucky, you'll see a hint of the purple/lilac as well. As it's a foil, the finish was very shiny in the metallic sense but not as glossy as a creme. Smooth surface that can still benefit from some top coat lovin'.
***All nail swatches were done with Orly Bonder Base Coat and two coats of Revlon Smoldering  unless stated. 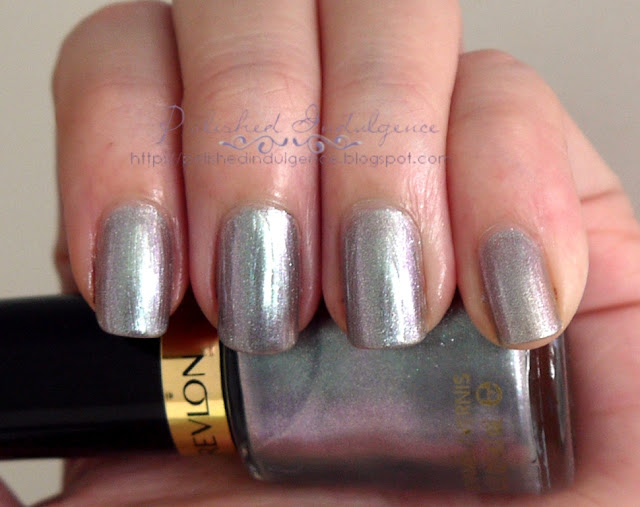 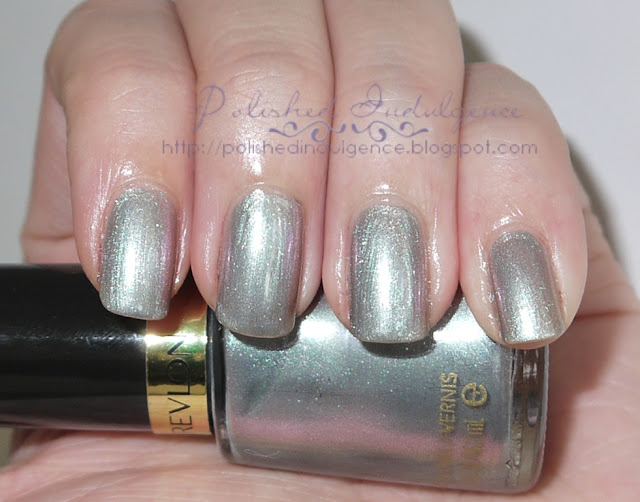 Natural light/No top coat/Flash
Mostly silver here, with a hint of lilac at the edges. 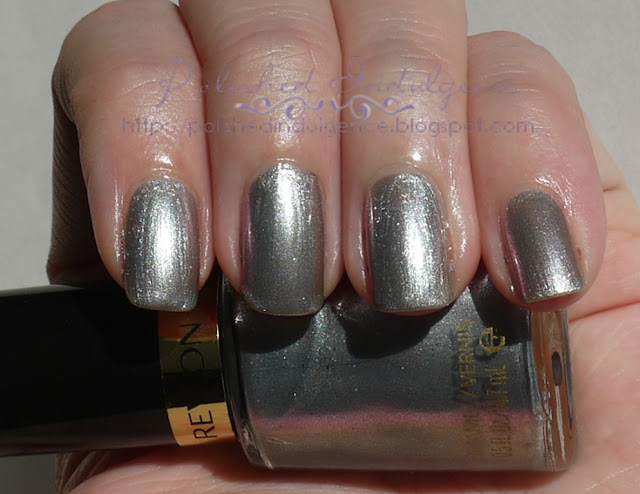 Sunlight/No top coat/No flash
Can you see the greenish tinge to the silver here?
I'm generally not a fan of the Revlon skinny brush but for all intents and purposes, it works really well with the formula of Smoldering. This one leans on the thin side but it's not so watery as to be hard to work with. It was surprisingly opaque in two coats, as well, with a formula that's almost comparable to it's Revlon sister, Carbonite. Seeing as it's a metallic finish, it does start off with loads of brushstrokes but they fade some as the polish dries. The finish is smooth and even, with a sprinkling of tiny microsparkles that you'll see when they catch the light at the right angles. Dry time was relatively fast for this one owing most probably to it's almost foil nature. 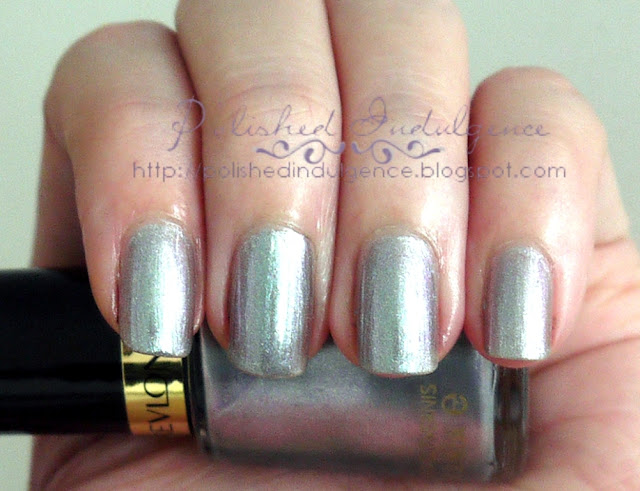 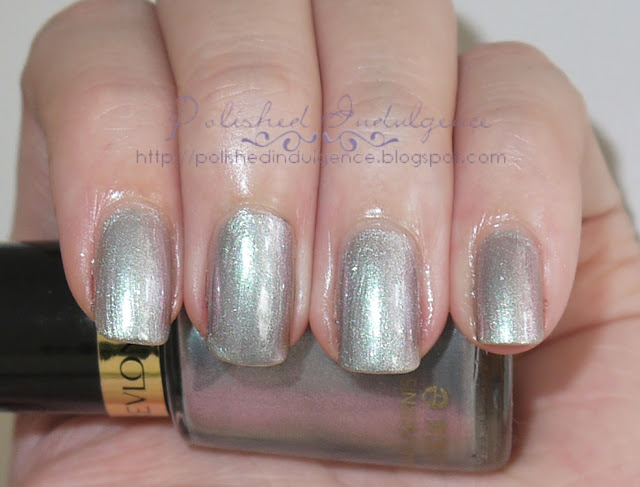 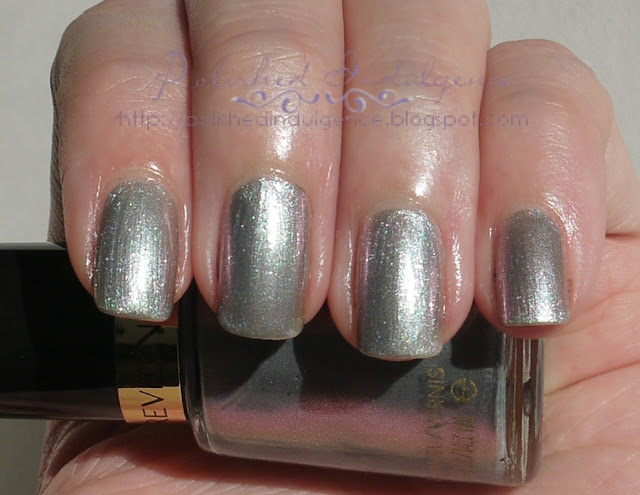 Sunlight/Top coat/No Flash
Hammie says: Oh, oh, look! I spy purple on the bottle!
While top coat doesn't necessarily add much to the shine factor, it does help with evening out whatever brushstrokes are left behind on the metallic finish.

With silver/grays that shift to purple/lilac with greenish tones, it feels as if we've seen a lot of it already. Off the top of my head, there's Deborah Lippmann's Wicked Game and the cheaper Wet n Wild Gray's Anatomy. OPI Not Like the Movies from the Katy Perry collection is another, along with the limited edition Sephora by OPI Mash Up from the Glee release. Out of the four though, the two OPIs are surprisingly the ones that share the same finish as Smoldering. They both have those distinctive tiny microsparkles that make the finish look like it has texture despite being smooth to the touch. Of the two, Not Like the Movies has too strong of a purple shift whereas Mash Up has that same greenish silver base going for it that Smoldering has. Now, I don't have Mash Up but from what I've seen, I can safely say that if Smoldering wasn't a clone of Mash Up, then it's its twin: exactly the same at first glance but very, subtly different upon closer scrutiny. Mash Up is actually in the sale section of the Sephora by OPI line and going for $8.55 (USD), whereas Smoldering goes for a mere $5.99 CAD at its most expensive and is available most everywhere (although I did find my bottle at WalMart and got it for less than $4. Score!). Between you and me, I'd rather go for the cheaper, easily accessible alternative any day seeing as formula-wise, Smoldering holds its own to its more expensive counterpart.

As deep as my affection for duochromes run, I wasn't altogether wowed by this polish. I can't fault the application, the formula or even the strong color shift. But I guess my lackluster reaction to it is based more on the fact that we've seen it before. Sure, it's not exactly the same, but the colors that it shifts to and the color of the base, it felt so much like déjà vu that it was hard to get excited. Don't get me wrong. I do like it. But it just doesn't excite me. Also, if you own none of the polishes I mentioned earlier, and you're looking for the cheapest alternative, I'd point you in the direction of Smoldering. Sure, Wet n Wild's Gray's Anatomy is the cheapest choice, but the sheer formula means a bajillion coats before you get 100% coverage and the most out of the color shift. The other three (Wicked Game, Not Like the Movies and Mash Up) are all decidedly more expensive than Smoldering and unless you prefer the brand, I see no reason to pay more for, essentially, the same thing.

Hammie was more amused/amazed with the color shift. He says that most of the other similar colored nail polishes he's seen don't easily show off that greenish tinge he adores. The price point is just right and with an excellent formula, he says you can't really go wrong. But the lack of originality/uniqueness does bother him so he grudgingly scores Smoldering:

8 Hammie Points!
Yay for the weekend! February just flew by, even with the extra day, don't you think? How do you feel about nail polish brands coming up with almost similar colors at almost the same time? Do you like the added options at different price points or would you rather have more color options?
Posted by Carmela at 7:00 a.m.