This is definitely turning out to be a great year for fantasy/sci-fi bookworms with adaptations of well-beloved books as tv series and movies turning up left, right and center (The Hobbit is finally coming out end of this year!). After all this excitement over the Hunger Games (have you seen the movie yet? I have and it was awesome!), I've decided to spare you for a day this week. Instead, we'll be channeling our excitement over the second season premiere of another book series that's been adapted into a tv series. We're talking Game of Thrones. (insert excited squeals and flailing here) The first season was intense, but if the books are any indication, it just keeps getting better from here on out. I've just finished the second book, A Clash of Kings, and I'm antsy to keep reading. But with the series still being written and only three more books before a long wait for the next, I've decided to try to read only as far as the next season of the tv series. At any rate, seeing the books brought to life will stem the anxiety to keep reading. So, in the mean time, of course I had to do nail art based on the book/series. Here's what I came up with: 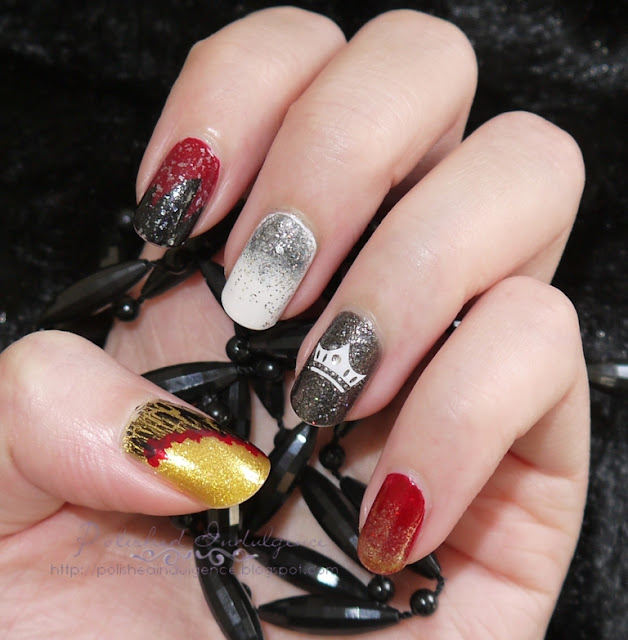 For the thumb, House Baratheon 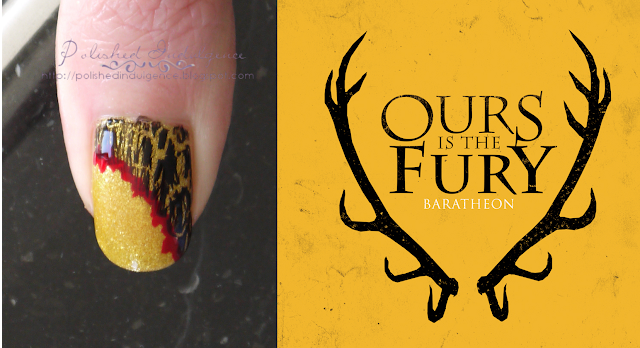 The crackle is supposed to be my cop out/easy way to mimic the antlers of the crowned stag of House Baratheon. But aside from that, it's also a way to symbolize how the House is now fractured with brother versus brother. I added that bit of red/blood at the seam where the black meets the pure yellow as a sign of events that have happened to the House including Robert Baratheon killed by a boar during a hunting trip, as well as a foreshadowing of sorts as even more bloodshed will be rock this house of kings. Theirs is, indeed, the fury. (That's all I'll say. No spoilers, promise!)

For the index, House Targaryen 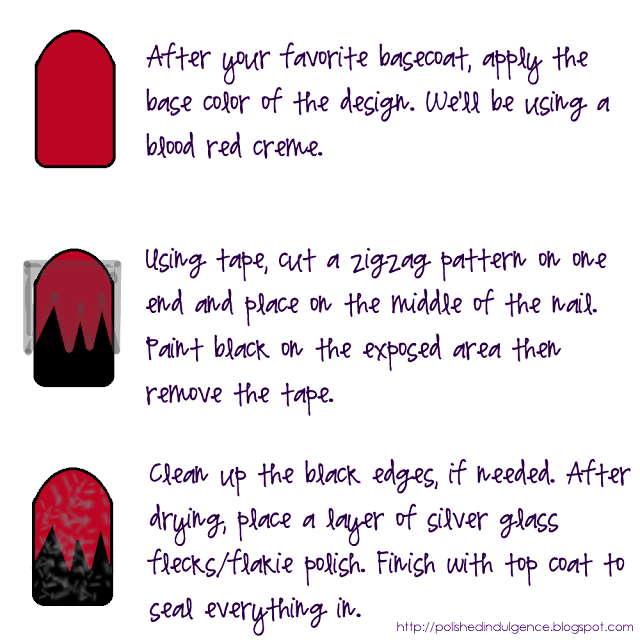 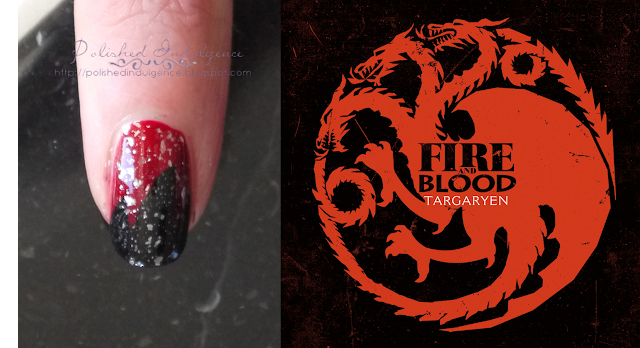 You might not see clearly, but I did do three peaks to symbolize the three heads of the Targaryen dragon standard. I also opted to do this zigzag pattern to emulate dragon wings or dragon claws with their sharp points. I added the flakies in hopes it would mimic dragon scales but it looks more like ashes falling over it. Not altogether a bad thing, as it coincides wonderfully with how House Targaryen is trying to rise out of the ashes to lay claim to the Iron Throne with Daenerys and her three dragon hatchlings: Drogon, Viserion, and Rhaegal.

For the middle, House Stark 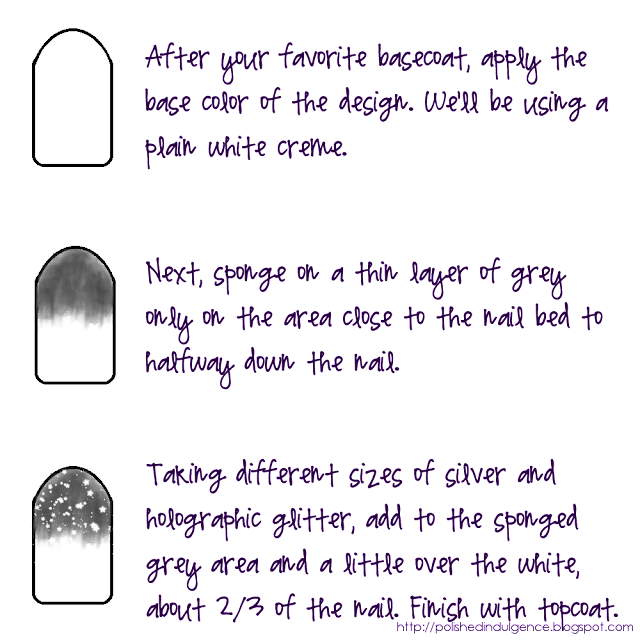 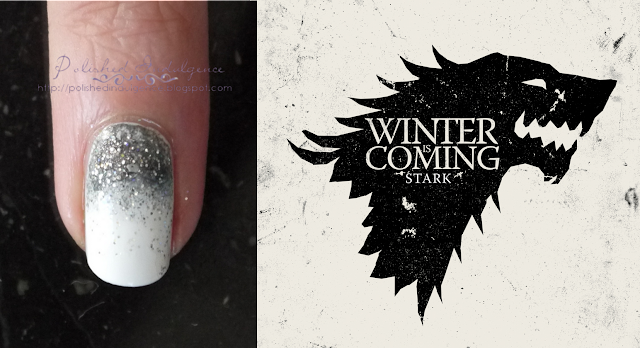 I chose white as the base not just for the Stark colors but to symbolize snow, as well. I wanted to convey an ominous sort of feeling hence the grey starting to overtake the white. See, I had in mind volcanic eruptions where an active volcano that's about to blow usually spews forth a far-reaching, dense cloud of ashes that settles on everything. Among others, that's probably the biggest warning sign of impending doom chaos. I feel that much of the same is true for the Starks, especially seeing how fate has separated their family after Ned's death.

For the ring, the Iron Throne 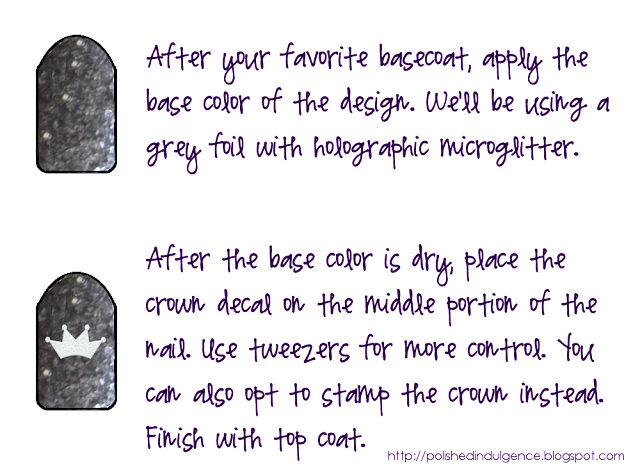 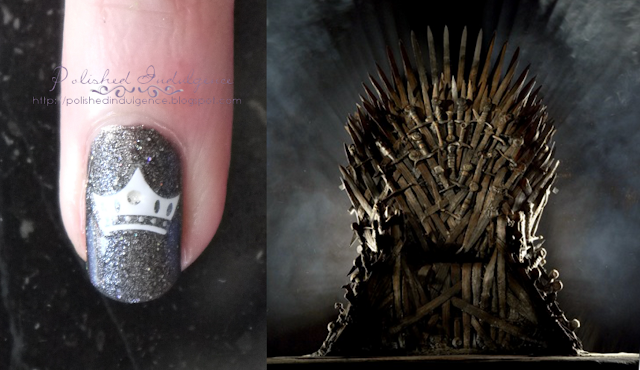 The moment I put Orly Stone Cold on, I kept thinking about how it reminded me so much of the Iron Throne. It wasn't just the grey color, but the actual texture of the polish where the holographic micro glitter adds this gritty texture to an otherwise smooth foil finish. It was pretty in a dark sort of way, but it could scratch you if you weren't careful (or wearing top coat). Very similar to the Iron Throne!

For the pinky, House Lannister 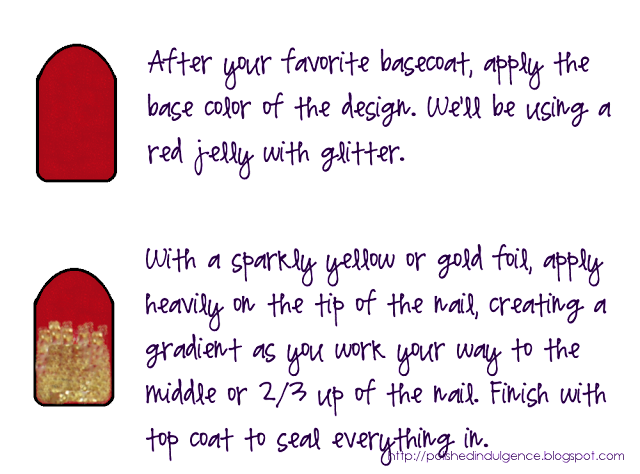 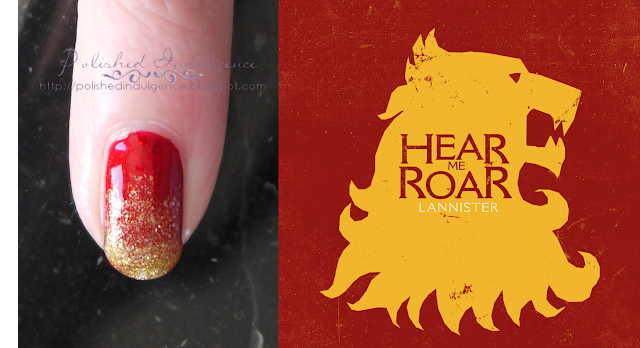 I went with Ruby Pumps instead of a plain red creme as the Lannisters are made of sparkly stuff (I honestly think they should've picked a unicorn as their standard, but that's just me). It seemed more than a little appropriate to add even more bling to the golden House. I wanted the design to look as if it was a red sparkly nail that was dipped in molten gold. I might have added a bit of Essie As Gold As It Gets to the gradient part to add even more of that dipped in molten gold feel. I'm thinking next time, it might be easier to do this with gold foil instead, seeing as I had a hard time getting the tips opaque using Lighthouse.

If you're wondering why I chose these particular houses, it was more because I felt the HBO series is giving these four the most screen time, thus far. Besides, out of all the other houses out there, I think that these four in particular will be key players in season 2 (as far as Book 2 tells me. But the temptation to just keep reading gets stronger everyday...), among others we'll be introduced to as the season progresses. I also made sure that Targaryen and Stark were next to each other mostly because I'm hoping for a Daenerys/Jon Snow angle. They're both so separate from everything that's going on in Westeros yet, they have these strange parallels in the events that do occur to them. But maybe I'm just reading too much between the lines. We'll see. 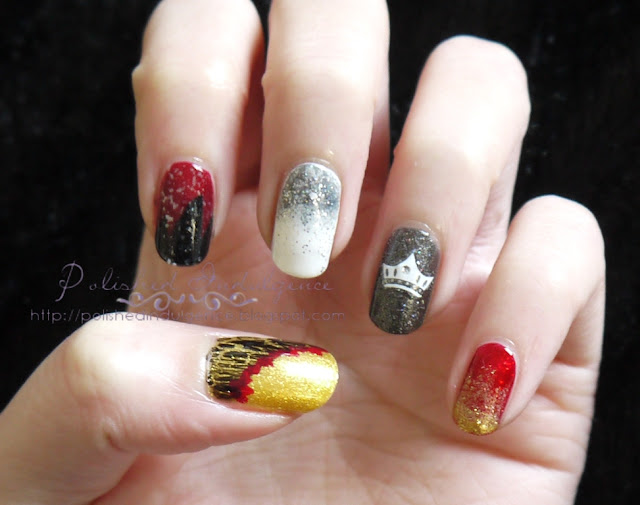 The claw is back! (I really wish there was a better of showing the whole hand by itself..) 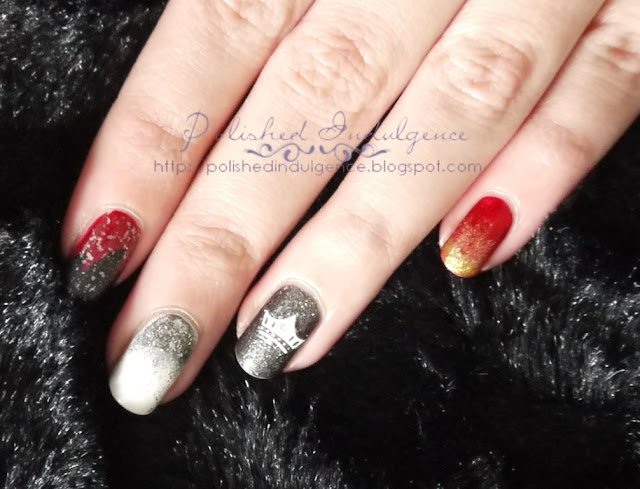 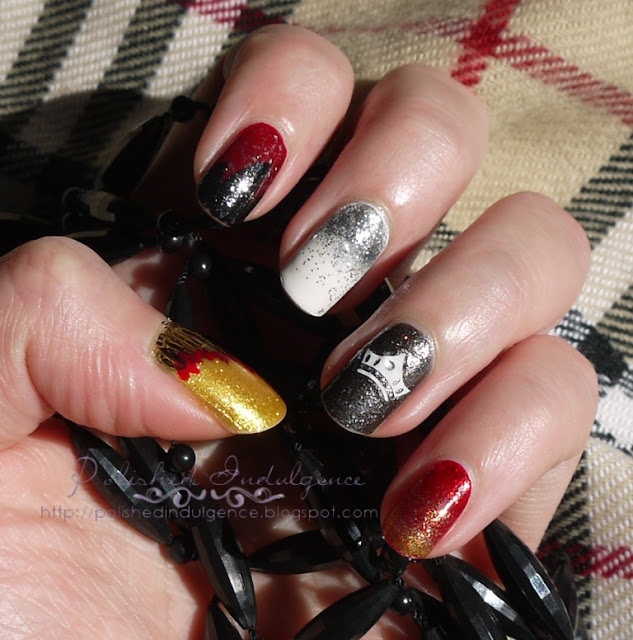 Hammie says: Love how they all sparkle in the sun! 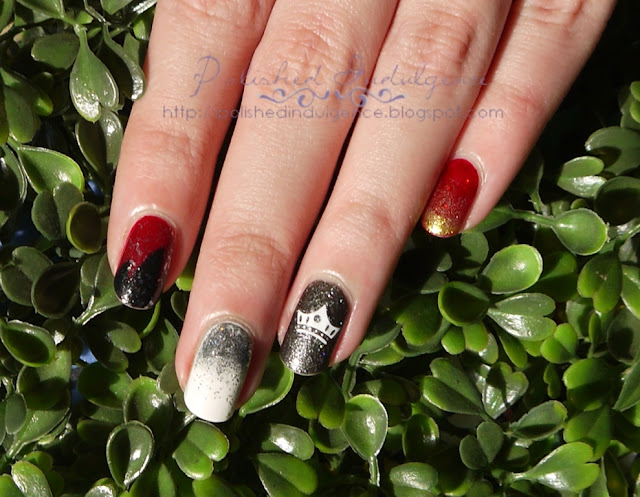 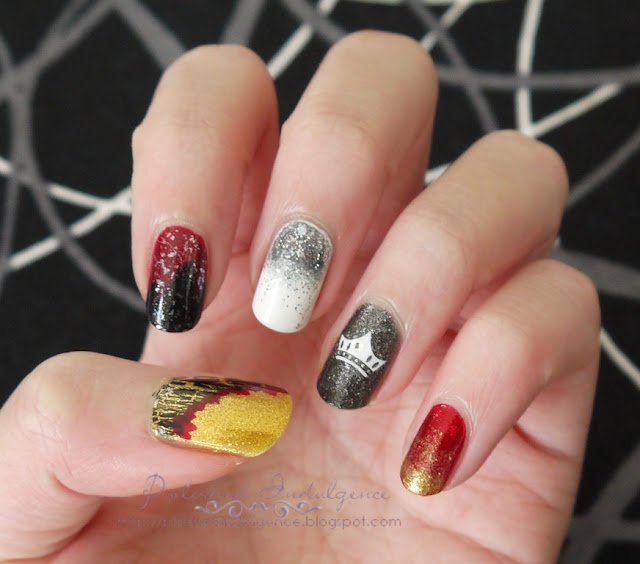 One last look!
Are you a Game of Thrones fan? Have you read the books or would you rather watch the series and then read the books after? Do you have a favorite book (any genre) that you'd love to see as a tv series/movie?
Posted by Carmela at 7:00 a.m.