Nail Art Wednesday: Fiery Flame Nails Inspired by the Hunger Games and the Girl on Fire

"Katniss, the girl on fire, has left behind her flickering flames and bejeweled gowns and soft candlelight frocks. She is as deadly as fire itself."
- Suzanne Collins, Catching Fire
Yes, we're doing Hunger Games week here at Polished Indulgence. If you can't tell, we're reaaaaally excited about the movie coming out this weekend and to kick it up a notch, we're doing a flame nail design for Nail Art Wednesday. I swear, the moment I read about Katniss sporting flame nails during that first Hunger Games to go with the whole Girl on Fire thing, I knew I had to do my own take on it. Now, flame/fiery nails aren't exactly something new. I've seen all sort of variations that a simple google of "flame nail art" shows you. On that note, I sure hope you aren't tired of seeing them yet as I've yet another variation to show you today.

I wish I could take all the credit for the technique used behind creating the design, but I can't. It's the brainchild of Lindsey from Neverland Nail Blog where she uses a dry brush to create a gorgeous smoky texture. My first thought upon seeing her tutorial was how perfect it would be to use in a flame design, and so here is what I came up with: 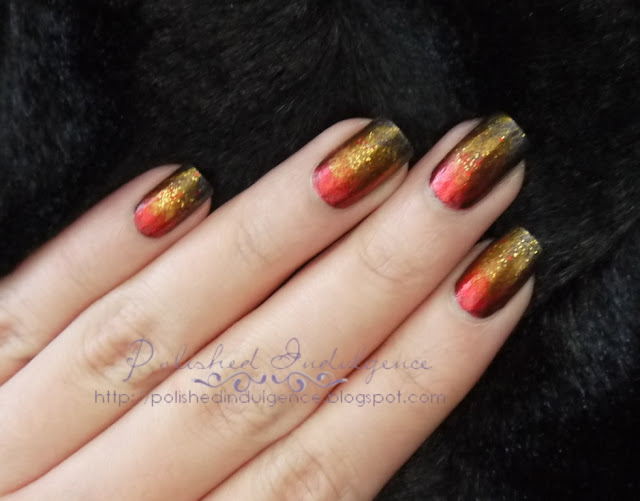 How I Did It:
***Some of the details might be lost in the photos without flash so you'll find below one with flash and another without for each step.

Step 1: After applying your favorite top coat, apply your base color until it's opaque. For this design, we're using a matte speckled black.

Step 2: Place a bit of the yellow on a piece of foil or on a palette. Take a round, dry paintbrush (the smaller it is, the more detail you can create) and dab it on the yellow polish. Using swooping motions, do random swirls and curves on the nails.

Step 3: Place a bit of the orange nail polish on your foil/ palette. Doing the same as with the yellow from step 2, randomly add swirls and curving lines on to the nail. Be careful not to cover the yellow too much.

Step 4: Do the same as step 2 and step 3 with the red color. But this time, also make sure that you cover the lower part of the nail close to the cuticle.

Step 5: The lighter colors might be looking drowned out by the red at this point. If that happens, take the orange again and create swirls starting 1/3 from the cuticle (and only very slightly overlapping over the red).

Step 6: Using the yellow, do the same swirling but starting 2/3 from the cuticle and only very slightly overlapping over the orange.

Step 7 (optional): I wanted to add the sparks you'd normally see from a huge fire (plus, it gave me a great excuse to use another of the polishes from the Capitol Colors collection) to give it even more dimension. Taking a teeny, tiny bit of some gold and red glitter, dab it on just the 1/3 of the nail from the free end. Clean up the edges if you messed up some and finish with top coat to seal everything in then you're all set!

I used a bigger brush that I normally would use with nail art so I'm not sure if it's because of that that the swirling details aren't as obvious. It could also be because of the colors I chose as they all blended together so well that it almost looks more like a gradient than the smoky look I was going for, or maybe the fact that doing it against a darker base makes it less obvious. Either way, I'm still happy with how this came out, but the next time I try to do this technique again, I'll probably stick to a smaller brush and more contrasting colors. I love how the metallic finish of the "fire" against the dark base really stands out and looks like its glowing. Adding the glitter for the sparks was just like adding the cherry on top. 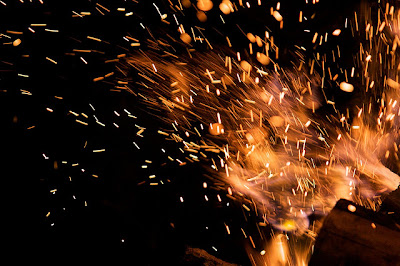 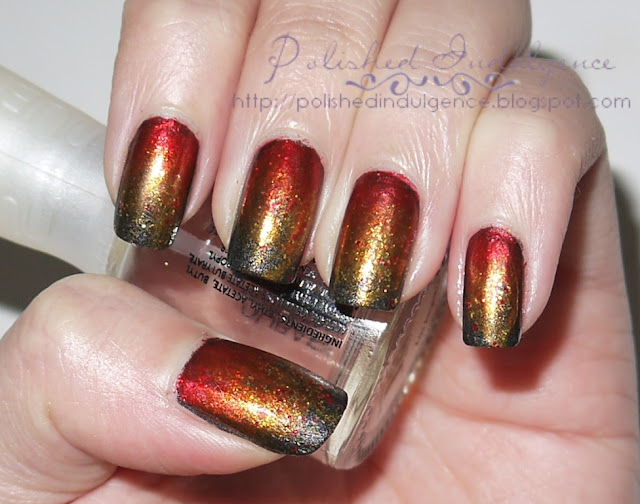 Love how glow-y it came out! 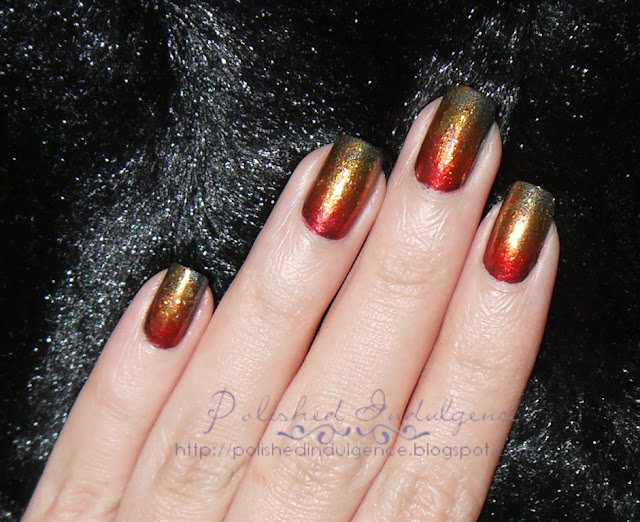 Can you see the "sparks"? 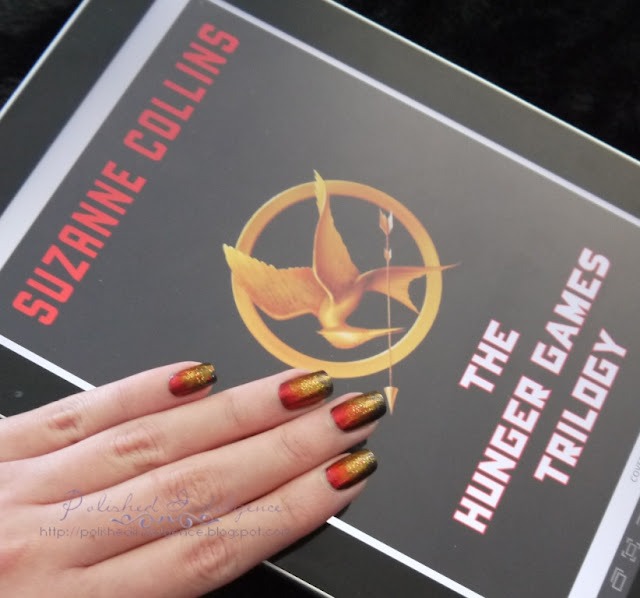 Yes, I don't own the actual books as, instead, I have the e-books on my trusty Kobo.
But you know I had to pose with the cover anyway. 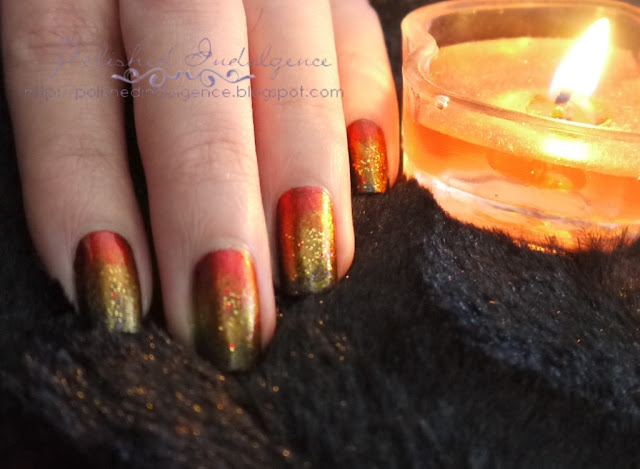 I wanted to do a photo with fire too, but this is as close to an open fire as I'll ever get.
(Kids, don't try this at home.) Hammie says: Oooh. Matches Mr. J's scarf!
Happy Hump Day! Halfway through the week and I'm wishing the weekend was here already! Will you be watching the movie on Friday? Are you going to be sporting Hunger Games themed nail art? Have you tried (or will you try) your hand at flame/fiery nails?
Posted by Carmela at 7:00 a.m.