Forget the groundhog. Spring is officially in full swing for me once the clocks spring forward that extra hour, which it just did yesterday. I know a whole bunch of you will be moaning about that one hour less of sleep but that's not a bad trade off with better things coming like warmer weather and much more sunshine! While I haven't exactly jumped on any of the Spring 2012 nail polish collections (partly because I wasn't feeling them much and mostly because my wallet had a restraining order underway), I'm revisiting old favorites from past spring collections. At the (oft alarming) rate of polish accumulation I'm going through, it's nice to sit back and enjoy what you already have instead of constantly running after the next big thing. Today's beauty is just that, a Spring 2011 release (with a surprising possible dupe, read on to know what it is!): 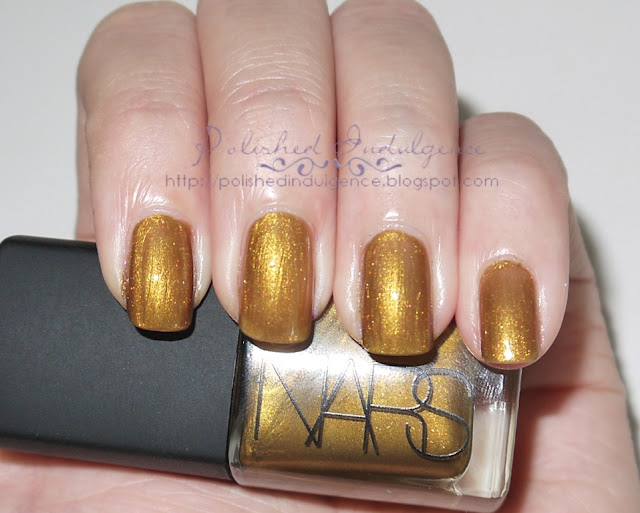 Probably the only yellow toned gold I'll ever be able to pull off with aplomb.

Brand/Name: Nars Desperado
Color: Antique Brass
Finish: Metallic
Price: $21 CDN for 14mL
Seen at: Holt Renfrew, The Bay, Sephora, Nars website and anywhere NARS cosmetics is sold.
Note(s): Desperado was a Spring 2011 release, originally slated as a limited edition product. However, it's still available on the website (I don't know about actual brick and mortar stores tho). I purchased my bottle at a warehouse sale late last year so I only paid $5 for mine. Major score! 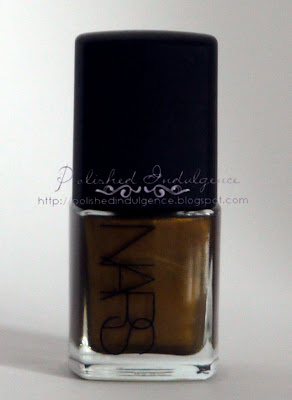 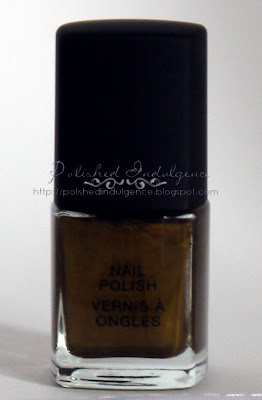 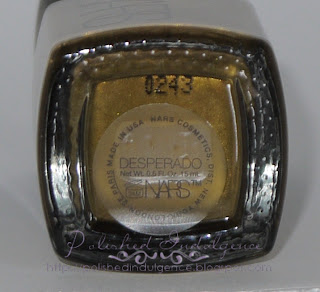 Label at the base.
Unfortunately, I don't have the ingredient list that usually comes in a leaflet in the box, but as far as I know, this should be Big 3 Free at the very least. 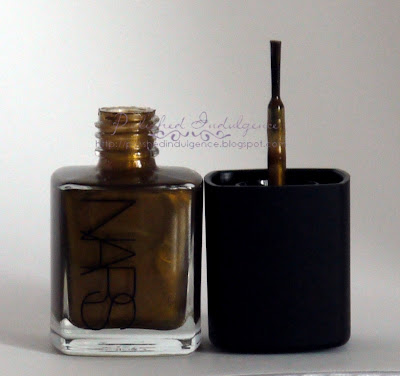 The rubberized cap comes in handy as this brush can be clunky to work with. 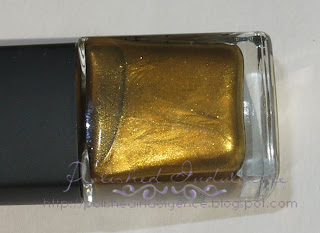 Glow-y and just downright purrdy.
Nars describes this color as an "antique brass" and I think that's pretty spot on. It's a warm toned gold with a lot of yellow and olive tones mixed in. I think it's the olive that makes this wearable for me. It helps balance out the warmness of the color to make it almost neutral. It has this polished bronze look to it except it has more yellow that makes it brighter. The finish is actually classified on the Nars website as "shimmery" but I'll go as far as calling it metallic. It reminds me of old gold or some sort of burnished metal but even with the vintage feel of it, Desperado remains strangely modern as well. Probably because you wouldn't normally classify this as a Spring color as it would seem more appropriate for a Fall palette. I have to admit, that's probably part of its charm that it seems out of season.
***All nail swatches were done with Orly Bonder Base Coat and two coats of Nars Desperado unless stated. 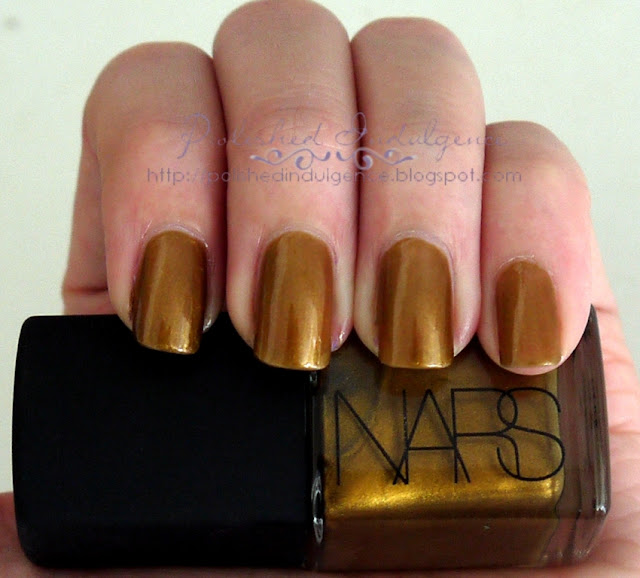 Natural light/No top coat/No flash
You can see the olive tones better under low lighting.
It has an almost greenish cast to it in some angles. 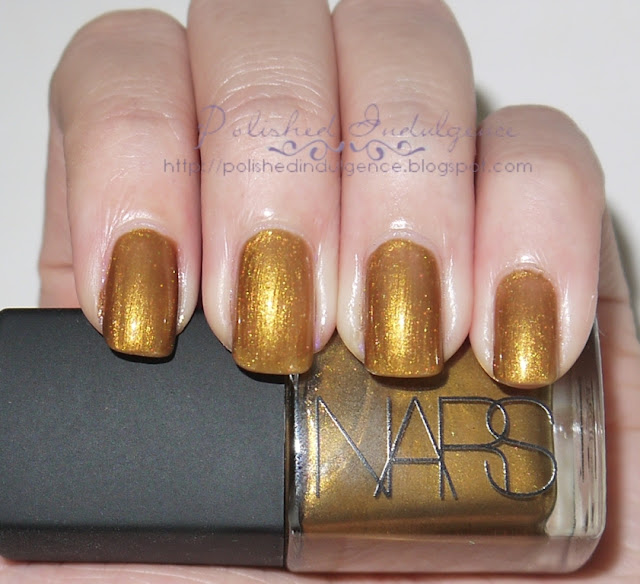 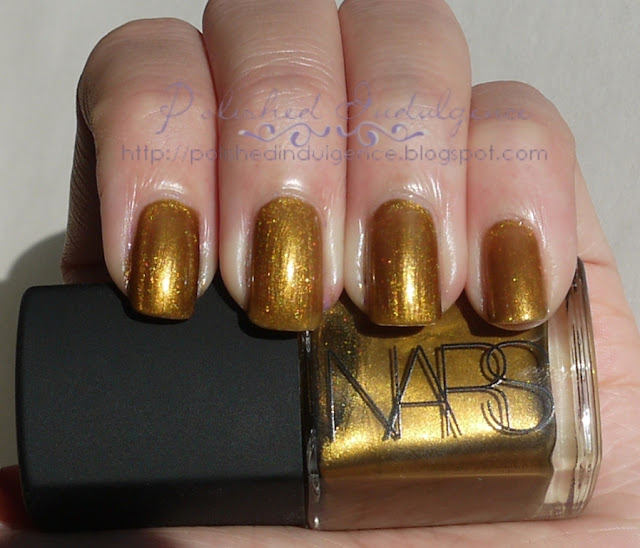 Sunlight/No top coat/No flash
Sunlight captures the mix of it all, showing off that antique brass look to it.
As awesome as the rubberized cap is, I'm still not a fan of the clunky handle. I honestly think it would be best if the square cap came off to reveal an easier to hold brush handle, just like the Chanel or Butter London packaging. But with a formula such as Desperado, having an otherwise annoying brush isn't much of a big deal. I've read on other reviews that the consistency was thick. With my bottle, I got a nice consistency that flowed well and evened itself out. If any, I'd say it was a bit more on the watery side, but not by much at all. The floppy brush was a joy to work with as it fanned out nicely and made for an even application. I have to say though, that Desperado was a bit on the sheer side of the spectrum. If you've noticed from the swatch photos, bright light reveals VNL (visible nail line) that I otherwise didn't notice. I probably could've used another extra coat for maximum coverage and for better depth of color. It's also prone to dragging so it's best to make sure the previous layer is dry before applying another coat of polish. 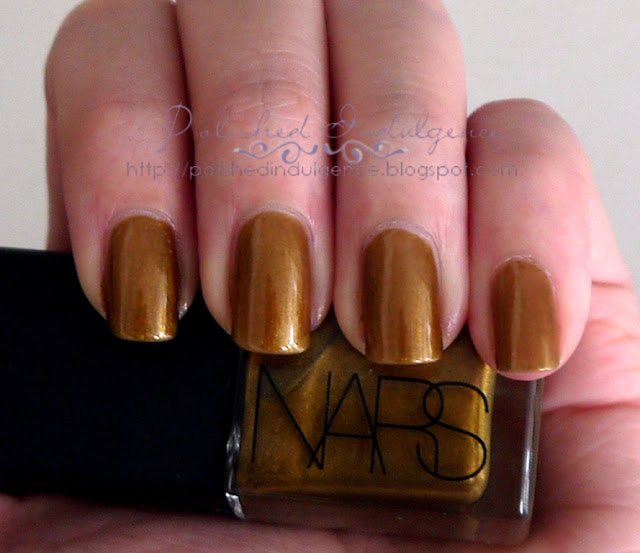 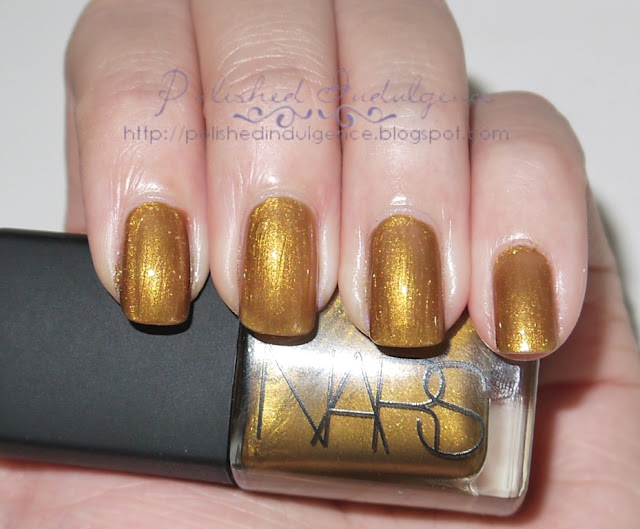 Natural light/Top coat/Flash
Hammie says: I can't decide if it's gold or bronze..? 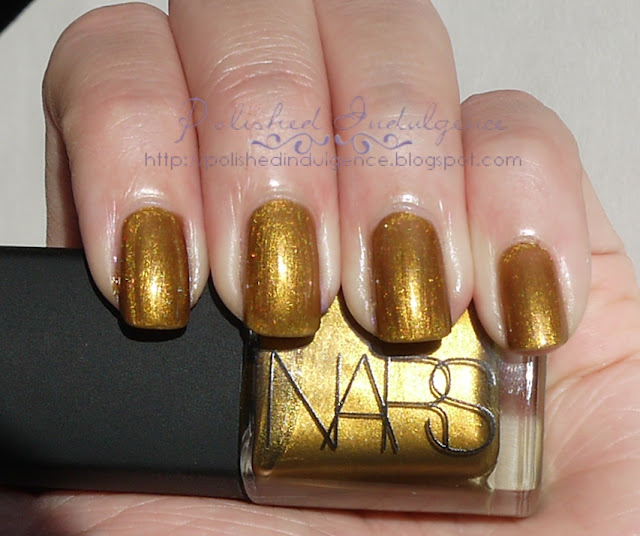 When Desperado first came out, I read reviews calling it an ugly-pretty color and unique looking. Now, I have to admit that it is one of those colors that's just so...different that makes it stand out so much. When I had gotten home and was taking stock of the damage haulage from the warehouse sale, I took a long look at Desperado, wondering why it looked strangely familiar. And then it hit me. I had gone to another warehouse sale (they're hard to resist when they hold them so close to home!) where I had gotten another ugly-pretty color for just a $1. I picked it up because I knew I had nothing like it and I was intrigued by the color. (On hindsight, I probably should have gotten a few bottles if I had known how rare it was.) That nail polish was Sally Hansen Burnt Sienna which I later found out was part of a Canadian exclusive, limited edition 2009 Project Runway collection. But what stunned me more was how close its color was to Desperado. Just look at the bottle comparison: 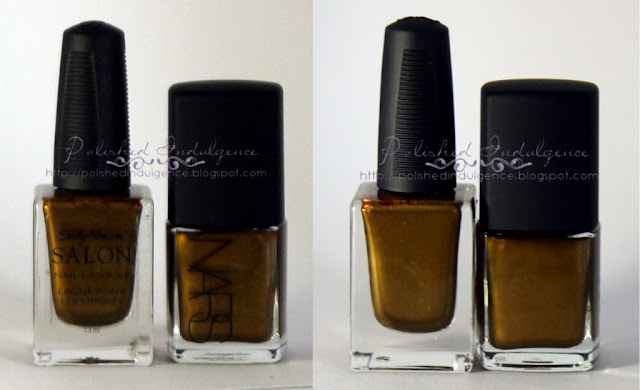 I swear, just looking at these, I was all but certain they'd be dupes!
Sadly, on the nail it was pretty obvious that they weren't. I'd call them fraternal twins or sisters but that's as close as they can get. Both share the same base color and finish, but Burnt Sienna (such a strange name as it's the farthest color from burnt sienna) has a touch more olive to it, making Desperado appear a tad more yellow compared to it. In bright lights, where the yellow shimmer shows more, the discrepancy seems a little less obvious and to the uninitiated, it would probably look like it's a match. As for application, the Sally Hansen polish requires a few more extra coats over Desperado so that's another thing working for it. Now, if you can find Burnt Sienna, I think it's a good enough match that you don't need Desperado. But seeing as both are limited edition and Burnt Sienna was released way back in 2009, it would seem more plausible that Desperado might be easier to get. Pricier, but easier to find. Unless you unearth one at a warehouse sale for $5.

Feel free to click on the photo to enlarge and see the difference better.


Despite its limited edition status, Desperado is still available on the Canadian version of the Nars website with a retail price of $21. But as far as stock goes in actual physical stores, I doubt they'd still have something from last year's collection. We all know how fickle cosmetics collections can be. Aside from the Sally Hansen almost-dupe, I can honestly say that I've never seen any other polish quite like it. If you're after a unique color with an old world appeal, Desperado is right up your alley and the $21 tag might just be worth it. As for me, getting this for a fraction of that already makes the value for price of this metallic insanely high. It's an unexpected Spring color, for sure, and one that I'll be sporting to celebrate more sunshine filled days.

Hammie is somewhat baffled that two very close in color nail polishes were released two years apart. He thinks this may be an interesting example of how fashion trends come full circle. So while it may not exactly be a one of a kind sort of color, he still thinks Desperado dazzles in all the right ways. The need for extra coats for maximum opacity, the sheerness and somewhat runny consistency of the polish along with the clunky brush handle made it necessary to dock a couple points of his score for Desperado. Nonetheless, it's still an impressive:

8 Hammie Points!
Happy Monday! Here's to looking forward to more sunshine and warmer weather! Do you have dead on dupes in your nail polish stash? Would you get a nail polish if you knew it was a close match to something you already have? Do you think Nars nail polishes are worth the hefty price tag?
Posted by Carmela at 7:00 a.m.