When the exciting news of a Trina Turk and Julep collaboration for the September box broke, I have to admit, I was pretty excited myself. Ms. Turk is well-known for her bold prints and bright colors that evoke the SoCal design aesthetic. She has built a niche for her brand since opening her first retail store in 2002. More recently, the Californian designer has certainly made the rounds this year, earlier with a partnership with clothing brand Banana Republic for Summer 2012 that boasted of fun, destination-inspired prints that most certainly screamed summer. Shortly after, she did a second collaboration, this time with Threadless (who make fantastically designed tees that comprise about 70-80% of all the tees in Mr. J and my total tee count), an art-based community, via a contest to create a pattern for her Fall 2013 line. The contest ended last August, but for the curious, you can view the submissions here. As a Mashable article noted, it does seem a lot like the Trina Turk brand is in a "brand-building mode" and 'collaborations like these are helping her build brand awareness among new consumer groups'. This Julep + Trina Turk collection comes as no surprise, then. I did a bit of googling and found out that this is not a first-time partnership. Back in November 2010, Ms. Turk visited the Julep Nail Parlor in Seattle whilst in the city for business. Jane (the mastermind behind all things Julep) was a long-time fan and invited Trina to choose a color from the fall palette to be named "Trina". She ended up choosing a deep aubergine shimmer that was also used on the models for the Holiday 2010 shoot and as a perk during a Thanksgiving Day 2010 promo where you get a bottle with any order! Anyway, now we get a full Trina Turk collection, Julep style. I was so torn between two different styles that I ended up flipping a coin to pick (no, honest). Let's see how I fared this month: 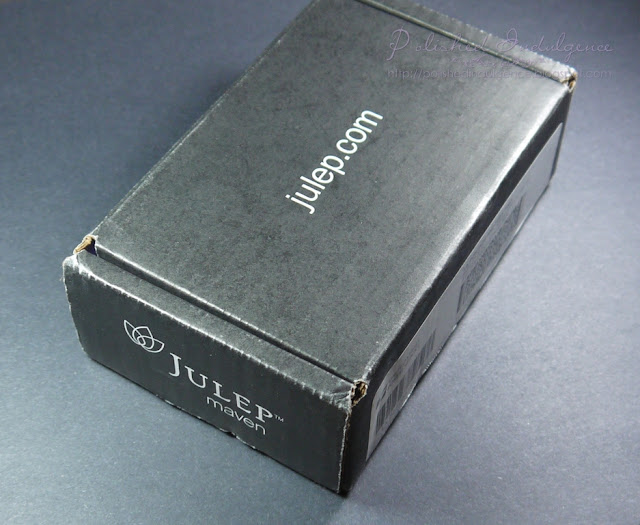 Oh look, it's a smaller than usual box. 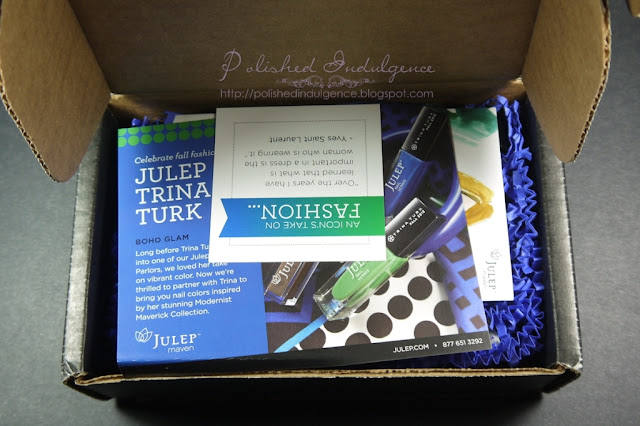 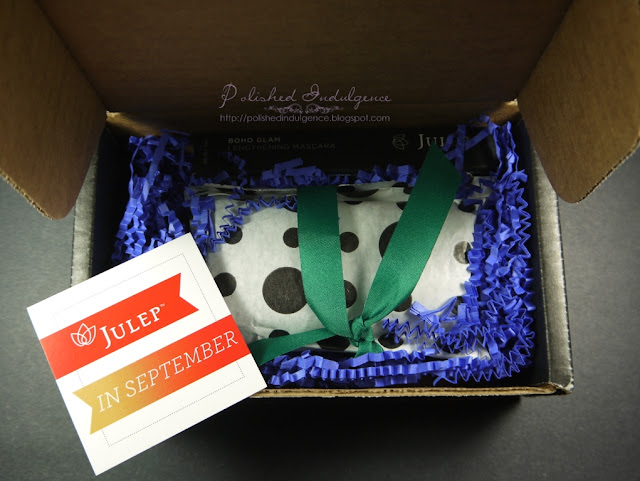 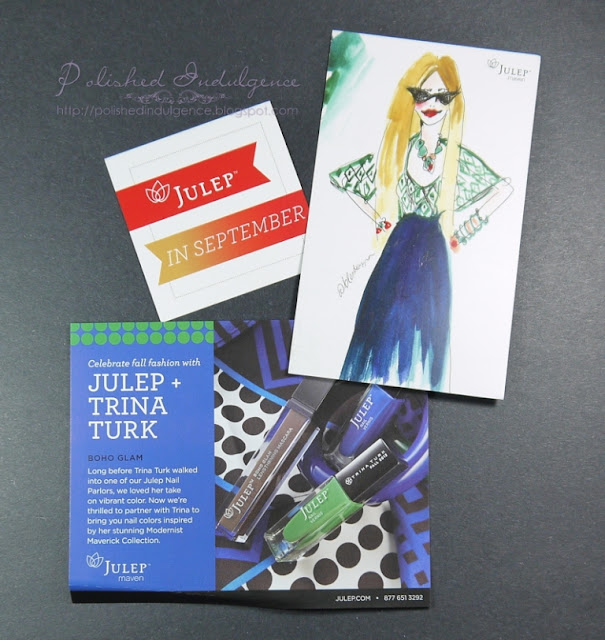 The pamphlets included this month. 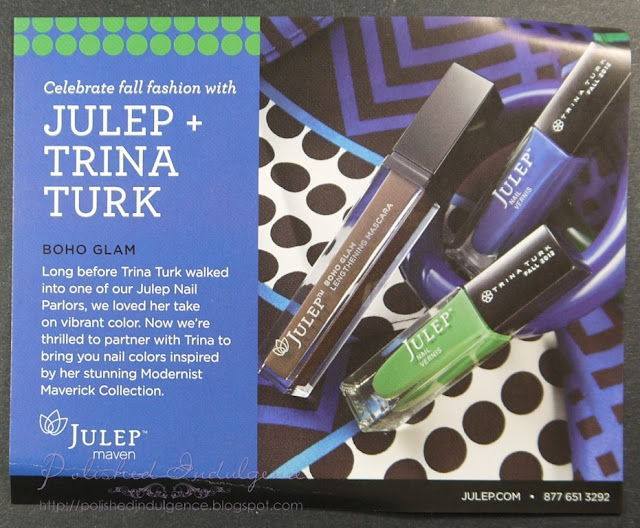 I am seriously loving all the polka dots.:D 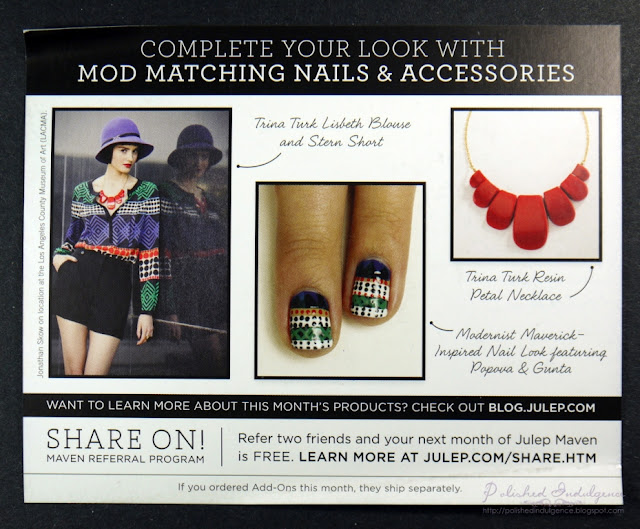 Interesting nail art design, but I think I'll need quite a bit more than just the ones in the box! 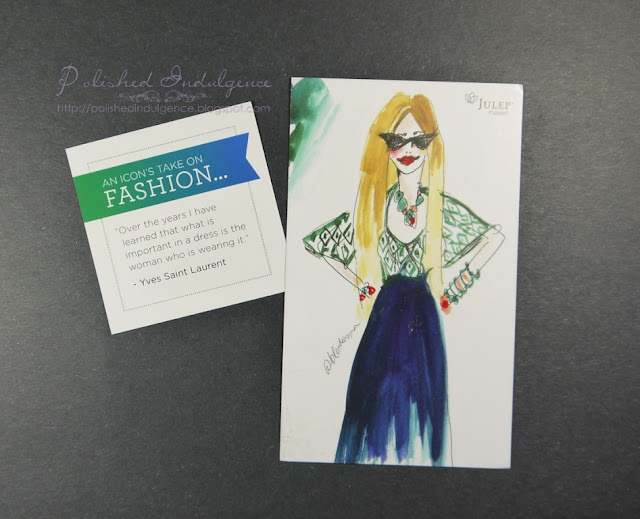 Easily one of my favorite parts of the box: a magnetic sketch!
I now have the chic-est fridge in town. :P 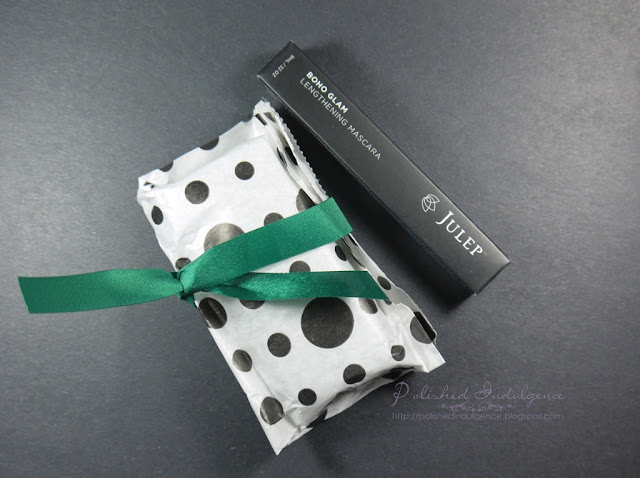 I don't usually include the packaging photo like this, but it's polka dots. Can't resist 'em. 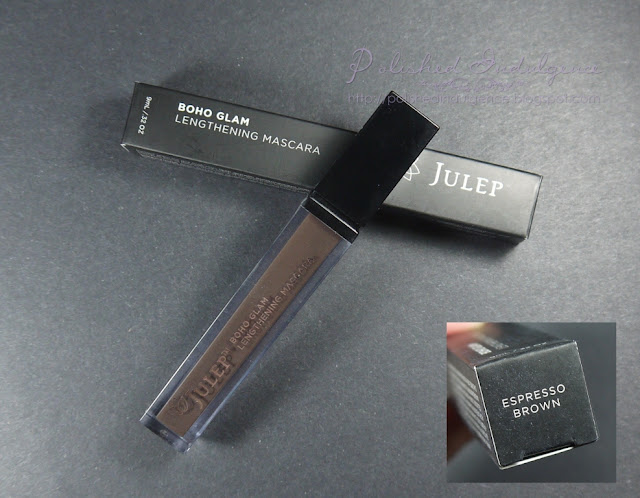 Lengthening Mascara in Espresso Brown.
I've never used a brown mascara before, so this should be interesting.

Pertinent info about the mascara for the curious/particular among you. 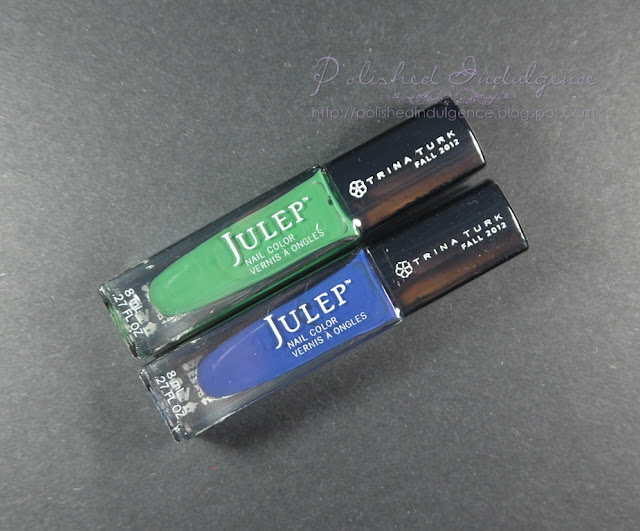 And here are the polishes! 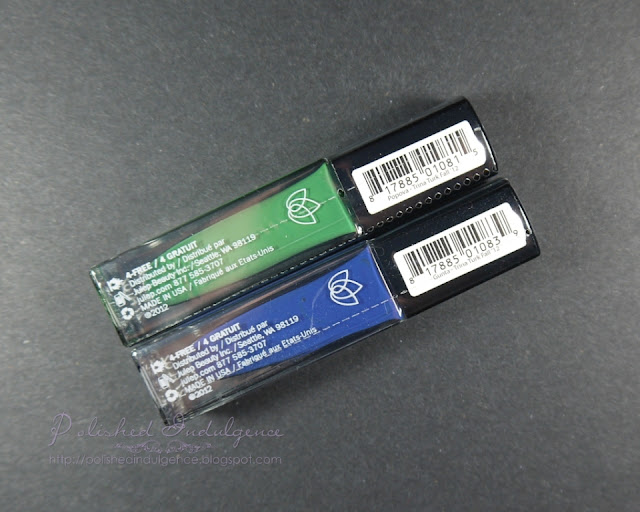 Popova is a kelly green creme and Gunta is a royal blue creme.
What can I say, creme is a finish I'll go back to, time and time again. 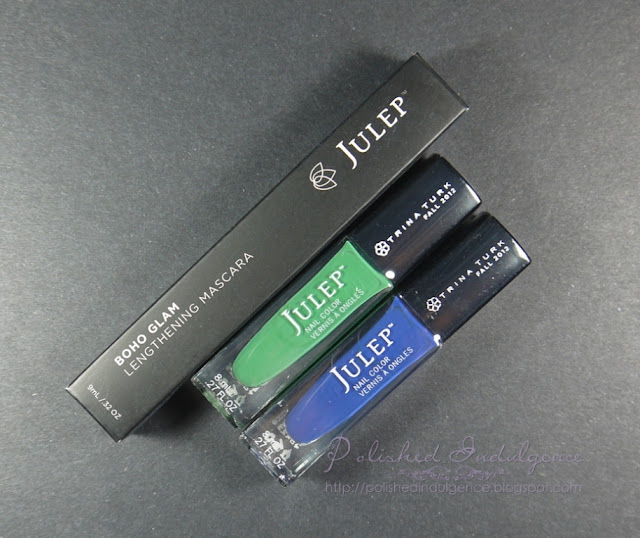 Here's the entire lot of this month's box.

I realize that this might be a teeny tiny box but I'm very pleased with it. I don't happen to have any other kelly green nail polish so I'm thrilled to have Popova. I'm a sucker for blue, and royal blues are my favorite kind, so picking Gunta was practically a no-brainer. As for the mascara, well, you can never have too many mascaras (especially since you have to throw them out every three months -- at least I hope, for hygiene's sake, you do, too) either and a brown one should be interesting to use. All in all, I'm glad I went with Boho Glam this month. American Beauty had a white and teal creme (not really a fan of full-on white polish) that I just had to pass on. I do have to say, I was quite tempted to go for the Bombshell option that featured a dijon mustard-like chartreuse creme and a topaz blue creme. Chartreuse looks like it's going to be the unexpected pop of color in the army of vampy dark shades for fall. But after my not-so pleasant brush with choosing an option that I had never chosen before, I decided to play it safe and stick to my tried and true Boho Glam (or American Beauty) option(s). If you want in on the Julep Maven fun, check it out here and make sure to enter the coupon code PENNY to get your first box for just a penny!

It's the weekend, yay! You're probably sick of seeing me say that over and over, but it really is a small victory to finally enjoy the weekend after a long week. The weather's not particularly cooperating, but that's just fall for you. I know, I know, I'm in denial myself, but have you seen those trees outside? There's no denying the need to start busting out the rake and leaf blower! Either way, I hope your weekend is a spectacular one. Have you heard of Trina Turk before this Julep collaboration? What's your design aesthetic (mine's borderline minimalist)? Would you like to see more designer/nail polish company collaborations in the future (like Peter Som, Bihbu Mohapatra and Cynthia Rowley with Zoya for NY Fashion Week)?
Posted by Carmela at 7:00 a.m.