And so we end this series with the last two of the set that I was quite happy to get. These were the other two colors, apart from Man Hunt, that I was eying. Now, before I got sucked down the rabbit hole that is nail polish hoarding collecting, I missed quite a lot of those kick @$$ colors that they just don't do anymore. One of the oldie but goodies that I've been drooling over was Chanel Paradoxal. Sadly, I also missed out on the Revlon dupe called Perplex so it was a happy day when it was re-released as part of the core collection and renamed Naughty. Sure, it was nice, but the formula wasn't the best. So when I heard of another possible China Glaze dupe from the On Safari collection, getting the Native set became a no-brainer. 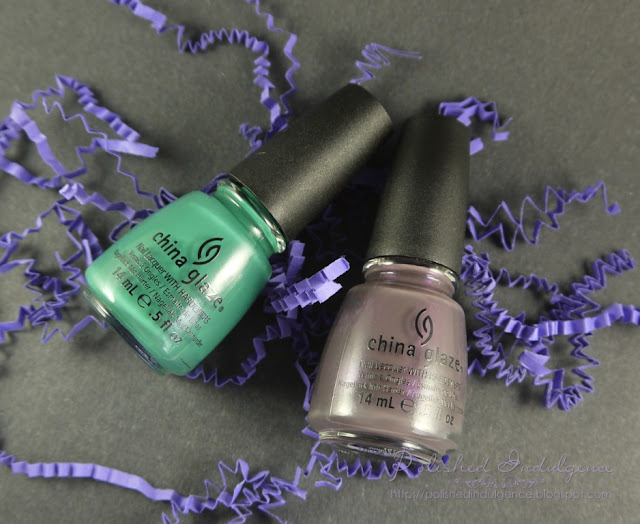 Ending the series with a bang: a pretty teal and a Paradoxal dupe (?). 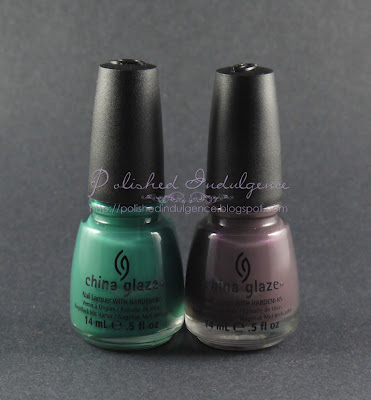 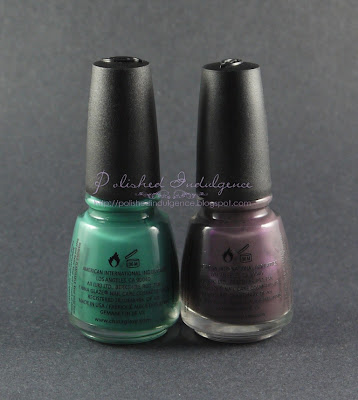 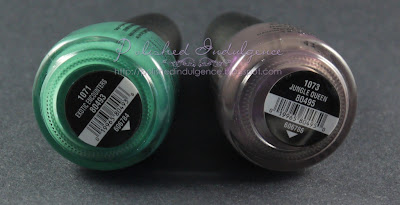 Labels at the bottom.
(Excuse the wonkiness, these two simply refused to stay put properly!) 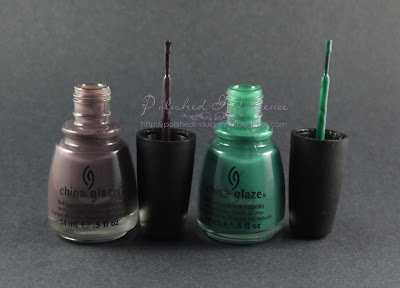 
Seen at: Sally Beauty, Nail Polish Canada, Trade Secrets and wherever China Glaze is sold.
Price: $7 CDN for 14mL
Note(s): Both are from the China Glaze On Safari Fall 2012 collection. Native is the 6-piece set of the darker, more colorful shades in the collection. Tourist is the 6-piece set that includes the two glitters and more neutral shades.
***All nail swatches were done with OPI Natural Nail Base Coat and two coats of China Glaze Exotic Encounters and China Glaze Jungle Queen unless stated. 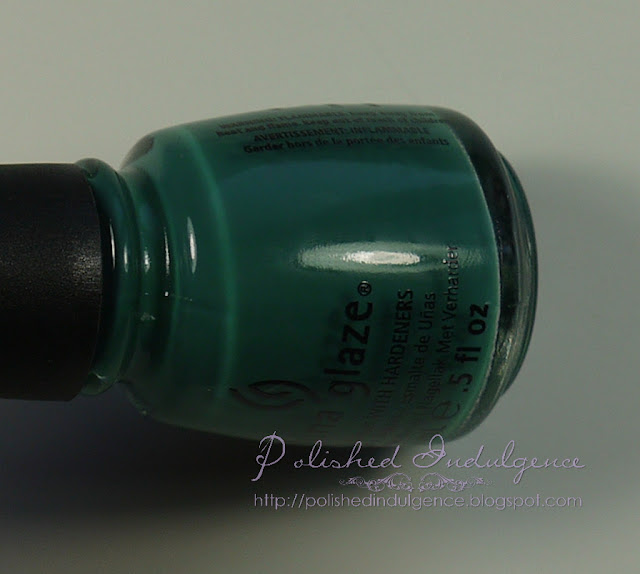 It's a creme, yes. So, naturally, you'd think that describing it should be easy peasy, right? Surprisingly, it's just the opposite. China Glaze calls it a "lush green creme with blue undertones". Fair enough. That's actually quite accurate. But the way I see it, it reads more dusty teal to me that can sometimes look more green than teal in different lighting. It's cremes like these that I absolutely adore. The complexity in color, coupled with the clean finish of a creme makes this a strong contender to become a classic. Think OPI Jade is the New Black but more blue, slightly paler and more dusty. 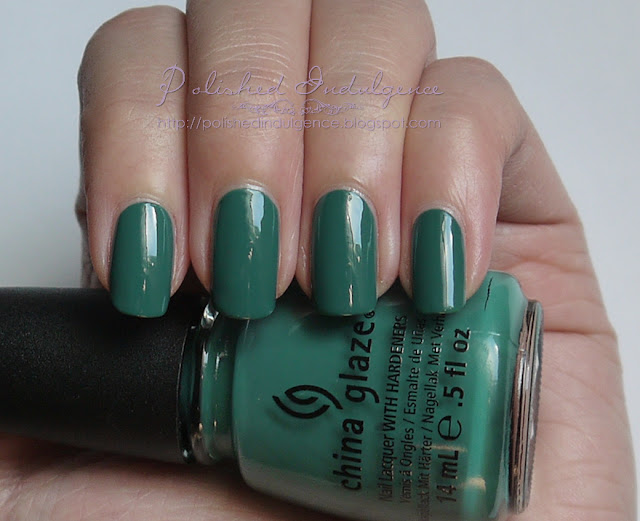 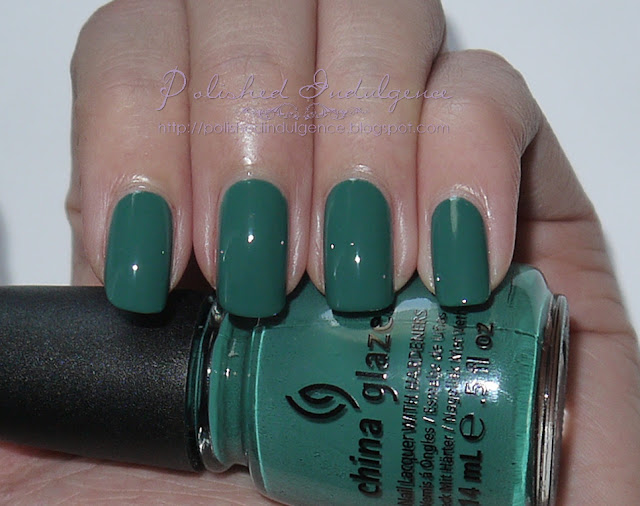 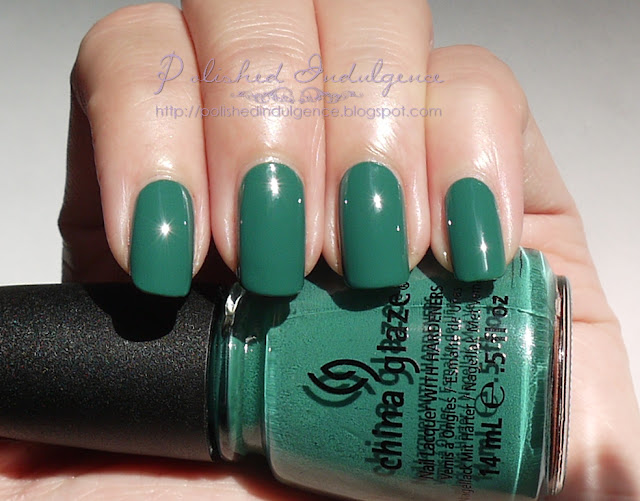 Sunlight/No top coat/No flash
Look at the vibrancy, despite the dusty aspect to it.

As with the previous cremes in this collection, Exotic Encounters had a really good formula. It was close to Goldilocks standards though it leaned just a teeny bit to the watery side of the spectrum. But really, that's just me nitpicking. Application was a breeze as it flowed nicely with the brush, leveled itself upon drying (meaning no streakiness, hooray!) and made for minimal clean up afterwards. Dry time was average. You should also probably double up on base coat as the blue pigment in this pretty teal might stain (though I experienced none). Better safe than sorry! 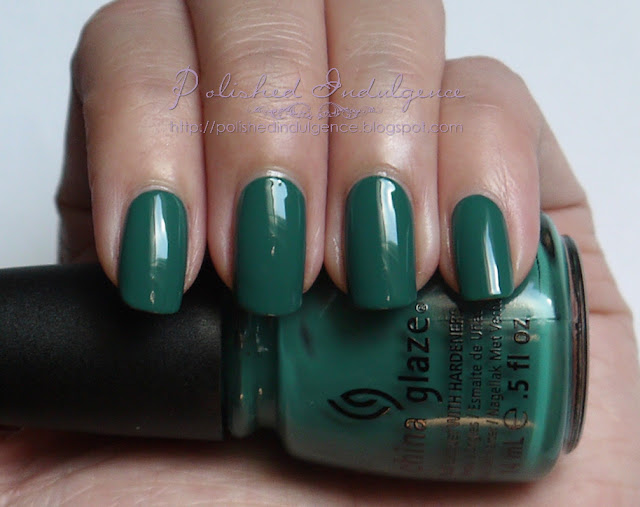 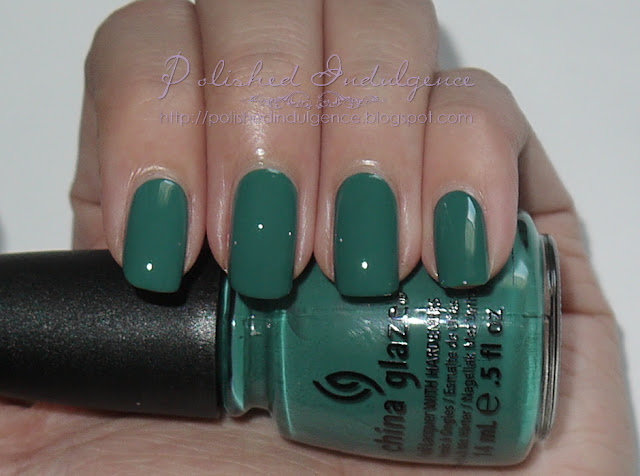 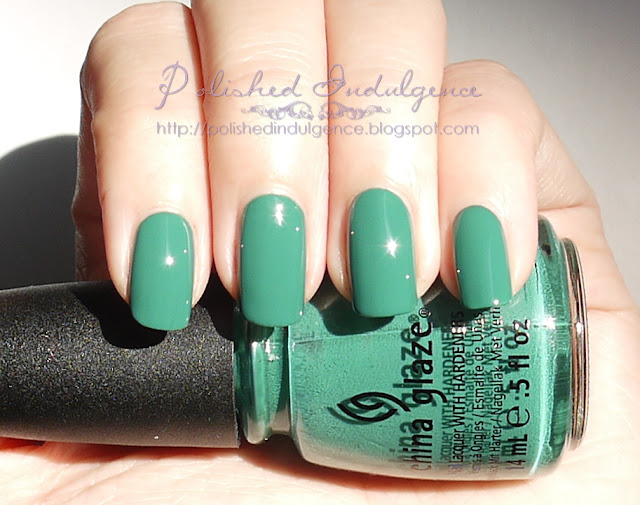 Hammie says he's generally not one for greens but with the blue undertones of Exotic Encounters, he'd like to make an exception. He can't find fault in the innate shine of the flawless China Glaze cremes nor the deceptively 'simple' teal shade. He echoes my sentiments in liking how strangely vibrant the color remains despite the dustiness to it (that makes it a very fall appropriate shade). As much as I enjoyed wearing Exotic Encounters, I was doubtful that it was a unique shade. It didn't seem all that revolutionary in terms of color choices so I figured there was bound to be a duplicate somewhere. I was so sure that it was a dupe of Fingerpaints Vintage Velvet, a fall 2011 release. But upon closer inspection, Vintage Velvet turned out to have just a touch more blue to it to keep them from being dupes despite having the same dustiness to it. Another possibility I found was Cult Nails Awakening but it had more grey/black in it and didn't have the same teal vibrancy that Exotic Encounters had. As far as the interwebs go, there hasn't been word of any other dupes either so imagine my surprise at finding out that this one's surprisingly unique! That makes Hammie one happy hamster as he does like his nail polish colors to be unique and, all in all, bolstered Exotic Encounters' final score. (No, I won't even touch on the name as it just invites all things risqué to the table. Umm, no thanks. GP/PG13 only.) 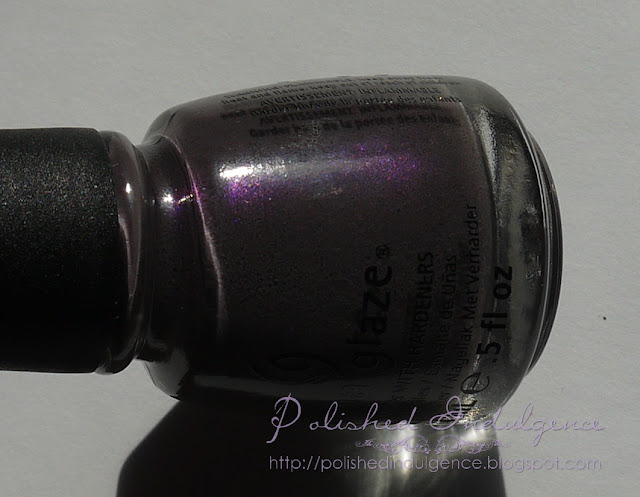 Check out that pink and purple shimmer!

What's not to love about Jungle Queen? It's such a pretty, complex shade that screams elegance. I love the neutral toned base that's as much of a color chameleon as your run of the mill duo/multichrome nail polishes. At times, it looks more like a greyed out purple or a purplish grey based taupe or a dusty taupe-y purple. It has this fantastic hazy quality to the color that keeps it in neutral territory. But when the light hits is just right, BAM! You get a flash of that pretty pink and purple shimmer. Now, it's somewhat of a hidden shimmer as it's pretty subdued. You know it's there as you can see it in most lighting but it's just not as apparent as it is under very bright light. 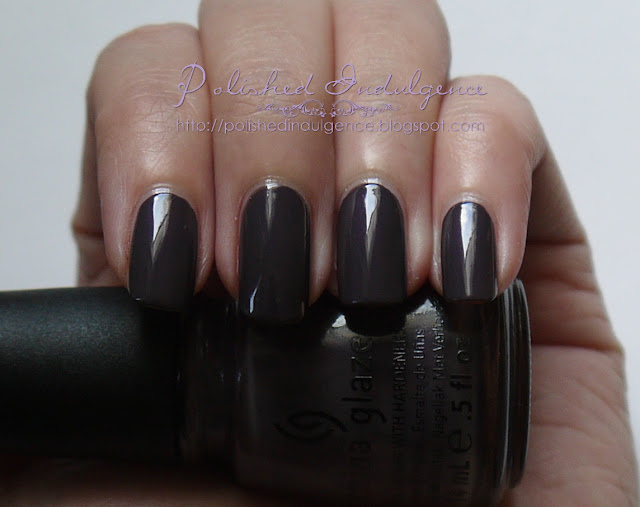 Natural light/No top coat/No flash
I have so much love for Jungle Queen. 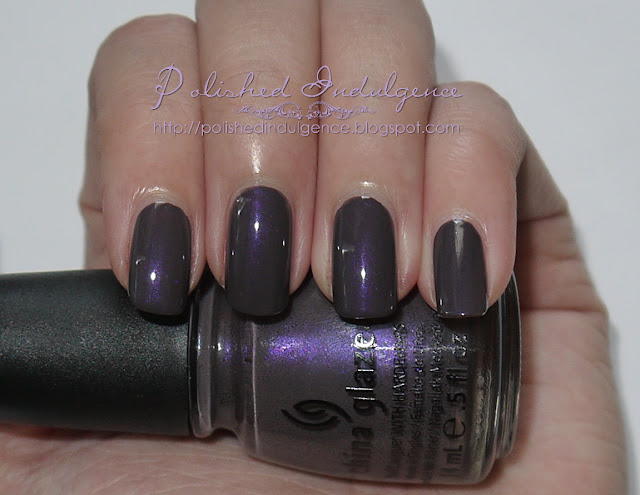 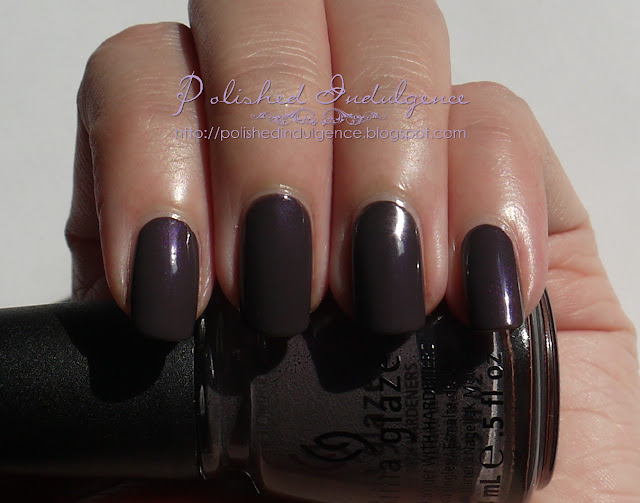 As with Exotic Encounters and the rest of the cremes in this collection, Jungle Queen was a pleasure to apply. It had a fantastic formula that pretty much hits the Goldilocks sweet spot and levels itself upon drying. Even your standard China Glaze brush works wonderfully with the easy to control consistency, so that you can get into the nooks and crannies without needing too much clean up afterwards. Dry time was average and removal was a breeze. No need to worry about staining with this one! 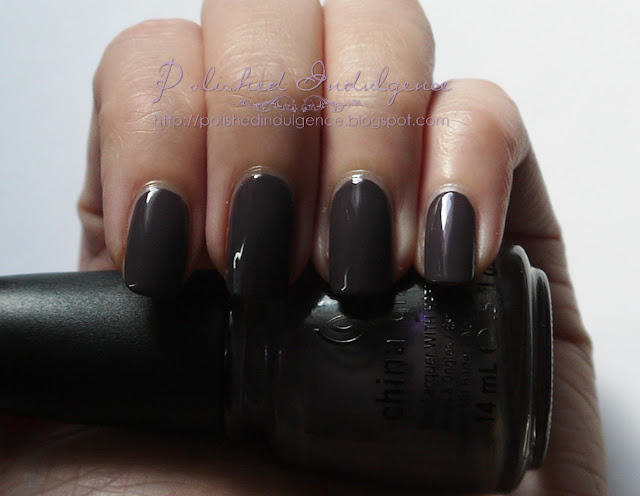 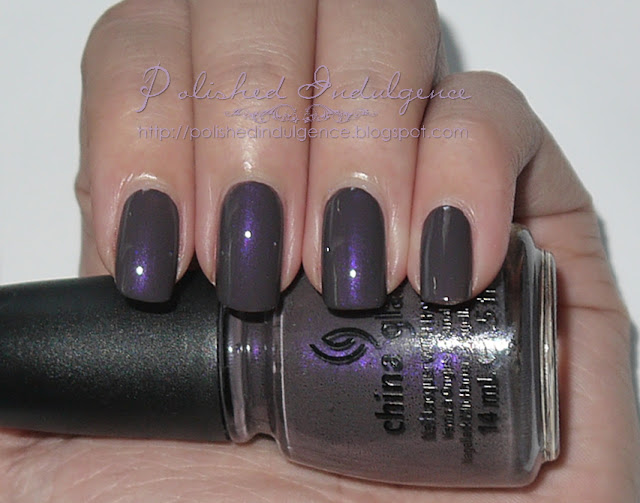 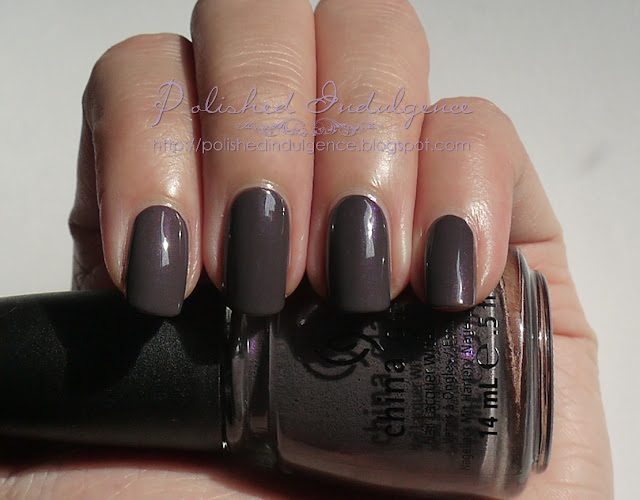 What more is there to say about how awesome Jungle Queen is? Even Hammie would gladly crown this pretty one queen alongside Man Hunt as king of this collection. The impeccable application and formula, along with the wonderfully complex creme/shimmer color and finish makes for a regal nail polish, indeed! There's just one hitch: it's most probably (because I can't say without a doubt that it is) a dupe for Chanel Paradoxal. For some, that might be a deal breaker. Surely, you don't need both. But for those of us who missed out or refuse to pay exorbitant amounts of $$$ to get our nail polish fix, we're thankful for this China Glaze version. Even Revlon Perplex/Naughty pales in comparison as it lacks the depth that Jungle Queen has. As far as application and formula is concerned, Jungle Queen also trumps Naughty in those aspects. Now, Hammie is usually not a fan of non-unique colors but he'd like to make an exception in this case. He says that having a high quality, lower priced dupe makes it an acceptable happenstance. After all, we are about finding better value for price and Jungle Queen is definitely better value for price than it's more luxurious (and spendy) Chanel sister.

Week-end, week-end, week-end (chant after me)! We finally have some exciting plans for the coming weekend! If you haven't heard, my brother (whom I haven't seen in years) is in Vancouver so we're heading out to visit and take some time to be tourist-y ourselves. Mr. J is super excited since he's never been. But you know what, I really think it's not right that flights to the US are a whole lot cheaper than it is to head west. Rule of thumb, international flights should be pricier than domestic flights, right? Anyway, we're all booked so there's no sense bemoaning what is. I'm also babysitting the Cutie Pie this afternoon so I'm looking forward to that. She's a smart one and getting to spend more time with the niece is always a good thing. But enough about me. How are your weekend plans shaping up? Are you a fan of less expensive dupes? Which is your favorite pick from the On Safari Native collection? And if you haven't already, do please take the time to enter for a chance to win a bunch of goodies from our first Blog Birthday Giveaway!
Posted by Carmela at 7:00 a.m.