Continuing in the vein of this month's Valentine-esque colors, we'll be deviating a bit from the traditional colors. Usually, Valentine's means pink, red and white, and by now I'd think you'd have been sick of pink. See, it dawned on us that the month of love doesn't necessarily just revolve around these three colors. There are a few out there that are also associated with the holiday, albeit not as obvious and used in your average Valentine's Day decor/display. One of the colors that jumped out was a pretty shade of blue that as a box any woman would absolutely love to receive as a present any day: 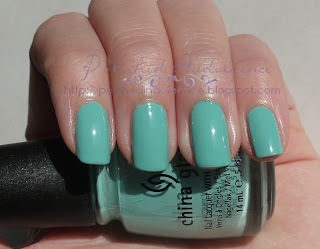 Maybe the boy will take a hint when he sees this pretty blue on your nails, hmm?

Brand/Name: China Glaze For Audrey
Color: a close approximation to Tiffany Blue
Finish: Creme
Price: $6.59 - $7.75 CDN for 14mL
Seen at: Sally Beauty, Trade Secrets, Winners, Nail Polish Canada, and various other beauty supply retailers
Note(s): Originally released in 2007 to commemorate Audrey Hepburn and Tiffany & Co., For Audrey is one of China Glazes most popular shades that has helped the brand gain its following. It's easily available in most beauty supply retailers. 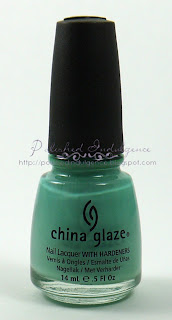 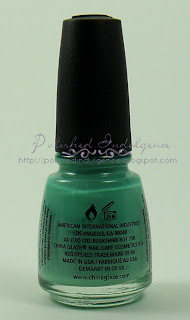 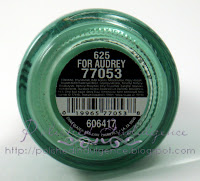 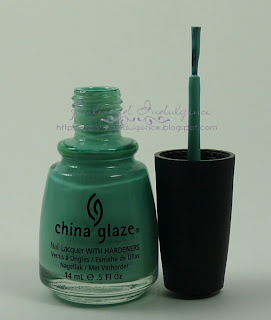 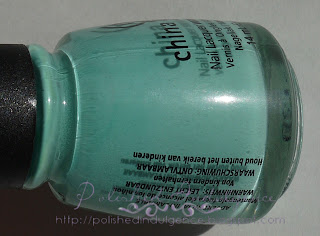 By far, one of the prettiest blues ever!
For Audrey is, by far, the closest to the trademarked Tiffany Blue of the Tiffany & Co. New York jewelers. It's a gorgeous pale robin egg blue that has an innate brightness to it. It's a color that's close to turquoise except it has more blue than the far green leaning latter. It's also comparable to aquamarine albeit possessing more green. I'd say it's safe to call it somewhere between the two colors I've mentioned. The finish is a gorgeous glossy and smooth texture that dries to a nice sheen even without top coat.
***All nail swatches were done with Orly Bonder Base Coat and two coats of China Glaze For Audrey unless stated. 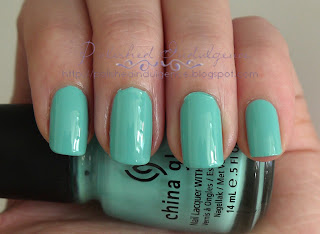 Natural light/No top coat/No flash
Glossy finish even on its own. 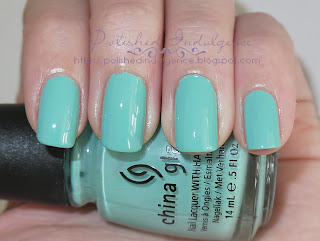 Natural light/No top coat/Flash
Excuse the flooding at the cuticles on the ring finger! 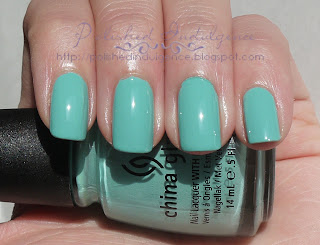 Sunlight/No top coat/No flash
Such a pretty Tiffany Blue!
I have to say that as much as I love this color, application is such a pain with this one! I'm hoping it's only my bottle, but it has this strange consistency of being at once thick and runny. I've never encountered a formula quite like it. It's thick in that it can be clumpy to apply thinly. It's a streakfest waiting to happen. However, applied thickly (or really, even with just medium coats), it suddenly feels strangely watery where I've experienced flooding at the cuticles (as evidence by my ring finger). Luckily, the streakiness of the formula does go away after drying. I'm hoping this strange consistency has more to do with the age of the bottle (I've had mine for a couple years now) or in that I might not have mixed it well enough after taking it out from storage. At any rate, the brush, as fine as it is otherwise, didn't help much with application either. But really, I blame the formula's strange consistency rather than the brush. Dry time is also compromised by the wonky consistency, drying longer than I'd expect. Maybe about 8-10 minutes before it's dry to the touch. 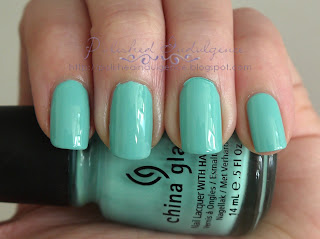 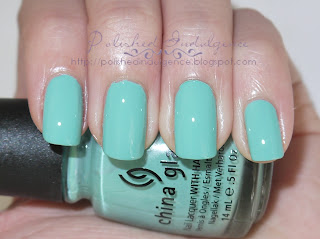 Natural light/Top coat/Flash
Hammie says: The one thing I like better than sparkly anything is a great blue! 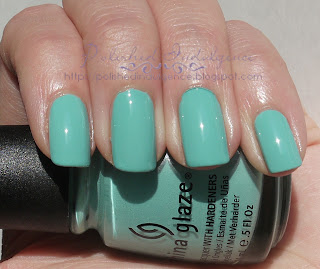 Sunlight/Top coat/No Flash
Hammie says: If Tiffany hadn't trademarked this pretty, I totally would. Just sayin'.
Isn't it funny how top coat doesn't seem to do much for For Audrey? While it may not be obvious shine-wise, it really does help even out the finish.

By now, I'm sure you know that while Tiffany Blue is trademarked, it hasn't quite stopped the nail polish magnates from coming up with their versions of the color. For Audrey is easily one of the bunch that has garnered the most attention and by far, is the closest color match in my opinion. But as far as options go, there are a bunch out there that are said to be a close match. In my stash, the closest is Color Club New Bohemian which is a mod take on the Tiffany Blue. It's a relief to know that neither are dupes as New Bohemian definitely has way more green in it. (Click the links to see a previous post I did that compared both.) Outside of my collection, there's Fingerpaints Tiffany Imposter. I haven't gotten it but for all intents and purposes, they seem to be fairly close enough to be called dupes. I thought Chanel Nouvelle Vague would be similar but while they share the same color family, For Audrey is a shade or two darker and without the subtle shimmer of its pricier cousin.

While For Audrey may have been around since 2007, it's not at all hard to find. I've seen bottles and bottles of this at my local Sally Beauty and it should be easy to get a hold of online as well, without having to pay an arm and a leg. Do you need this polish? Heck, yeah! I haven't met anyone who doesn't like this gorgeous blue. Every time I wear it, I always get asked what it is. Without. Fail. I really, honestly think that any polish addict should have at least a bottle of For Audrey. Or two. After all, who can resist the allure of Audrey Hepburn, Tiffany's AND the classic Breakfast at Tiffany's?

This blue is right up Hammie's alley. He adores the soft, almost muted yet impossibly bright blue of For Audrey. He says that this is one blue that he'd be happy to sport himself. Anything connected with the prestigious Tiffany's can be nothing but absolute awesomeness. The biggest point of contention, however, was the paradoxical formula that we had to deal with. Clumpy AND watery wasn't any fun so while Hammie had to dock a point from For Audrey's total score, it's still a hefty:

Happy Monday! Are you hoping to get something from Tiffany & Co. this Valentine's Day? What's your favorite shade of blue? Did you like Breakfast at Tiffany's?
Posted by Carmela at 7:00 a.m.