Out of the night that covers me,
Black as the Pit from pole to pole,
I thank whatever gods may be
For my unconquerable soul.
- Invictus, William Ernest Henley
One thing about me that always surprises people is when they find out I underwent a bit of military training. Nothing fancy as it was required in university, just marching about, really, and learning basic survival skills. Even then, my job throughout the whole experience was mostly administrative: took tally of attendance, processed the required paperwork and coordinated with the different platoons to make sure everyone was on the same page. I was lucky. Most of my friends had to endure hours under the hot sun perfecting their marching cadence and carrying heavy rifles. See, the people in the administrative team are those considered physically unfit. I just so happened to be the first casualty of the year when I hyperventilated after a hard run of exercises that were supposed to "loosen the muscles" on the first day. It was the first year that females were required to take the course, too, so everyone was skittish. I guess I looked pretty terrible with no ability to talk, gasping for air like a beached fish, that the instructors immediately moved me to the administrative team after I was rushed to the infirmary. All I really needed then was a paper bag, but that incident ensured I had one of the easiest jobs.

Suffice to say that Remembrance Day is one of those holidays that's close to home. I imagine, the horrors of war is more than a hundredfold of the hardships of military training. No one really wins until the fighting is ended. It's senseless violence that should be condemned. So to commemorate the sacrifices of all those who have fought in armed conflict both past and present, I proudly wear my poppy nails. 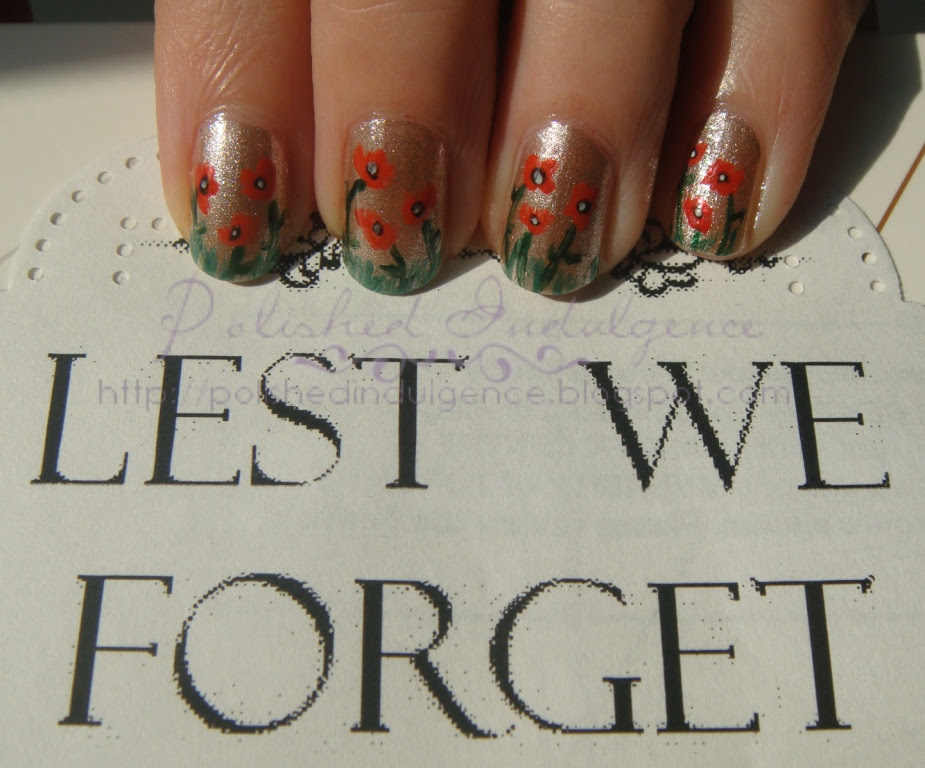 Red poppies symbolize the memory of those who died.

The inspiration that got the creative juices flowing. (Image Credits)
To find ideas of how I wanted this mani to look like, I took to Google Images and browsed poppy photos. The one above was the most striking of the lot and it made me want to recreate it with my own twist. I was also supposed to do a tutorial with photos as I've been told that pictures are often easier to understand than just enumerating the process. I took photos after I applied the base but then promptly forgot to take photos of the next steps. I only remembered what I was supposed to do by the time I was doing the stems and leaves. D'oh, Carmela. Hammie says he'll keep tabs on me for the succeeding posts so I won't get distracted and forget.

So we start with a cool toned gold foil as the base color. I chose Color Club Antiquated from the Foiled Collection which was surprisingly opaque in one coat. Then placing a drop each of NYC Spring Street and Madison Avenue on a piece of foil, I mix both with a detail brush. You don't need it to be perfectly mixed as the streakiness of it will actually add more visual interest. Using the mixture, start painting your poppy flowers on the nail. It doesn't have to look perfect as by themselves, they'll look a lot like globs of red. I decided to do three for each nail and five for the thumb. Make sure you put them in different levels so it won't look like just one straight row. Next, get your smallest dotter or toothpick (I used the same brush after a spot of cleaning) and dip it in the black polish. Dot the middle of the red globs you made. Again, it doesn't need to be perfectly in the middle. After you're done with the black, take some white polish and using your dotter (or toothpick or paintbrush), dot over the black. Be careful not to completely cover the black as it still needs to be seen. Then, we move to the greens. Taking a dark green (I used Nubar Greener), paint the stems and leaves with a detail paintbrush. Make the flowers lean a bit so it looks like they're swaying so try not to paint the stems too straight. Add leaves where you think there's a lot of negative space. Finally, take a lighter green (I used Rimmel 60 Seconds in Camouflage) and paint the grass on with a detail paintbrush, concentrating on the nail tips only. You can paint it as high as you want, but I would make sure they don't go higher than 3/4 of the shortest flower on the nail. Top with topcoat after all the layers are dry and you're good to go! 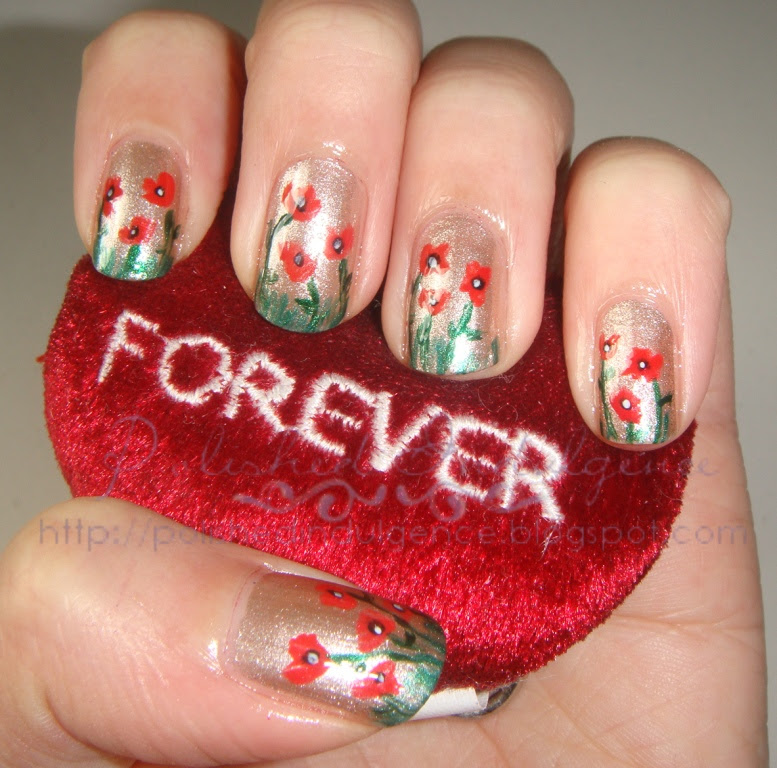 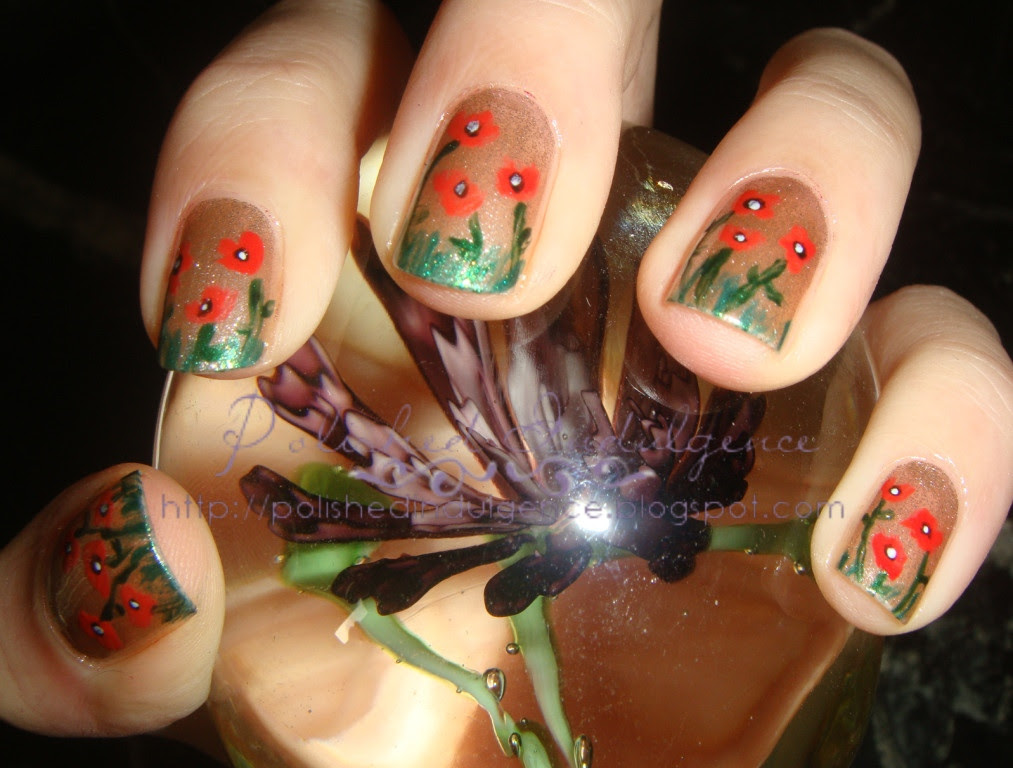 I didn't have a poppy on hand but this was a good substitute. 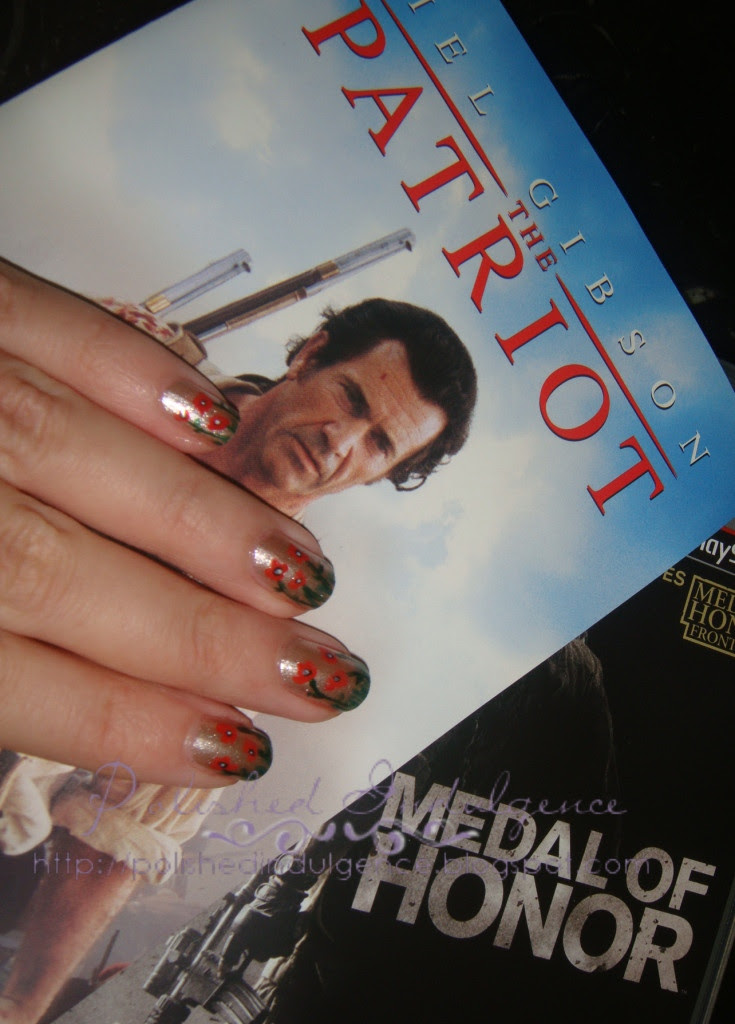 I was looking for something that said "veteran" and these were what I found around the house. 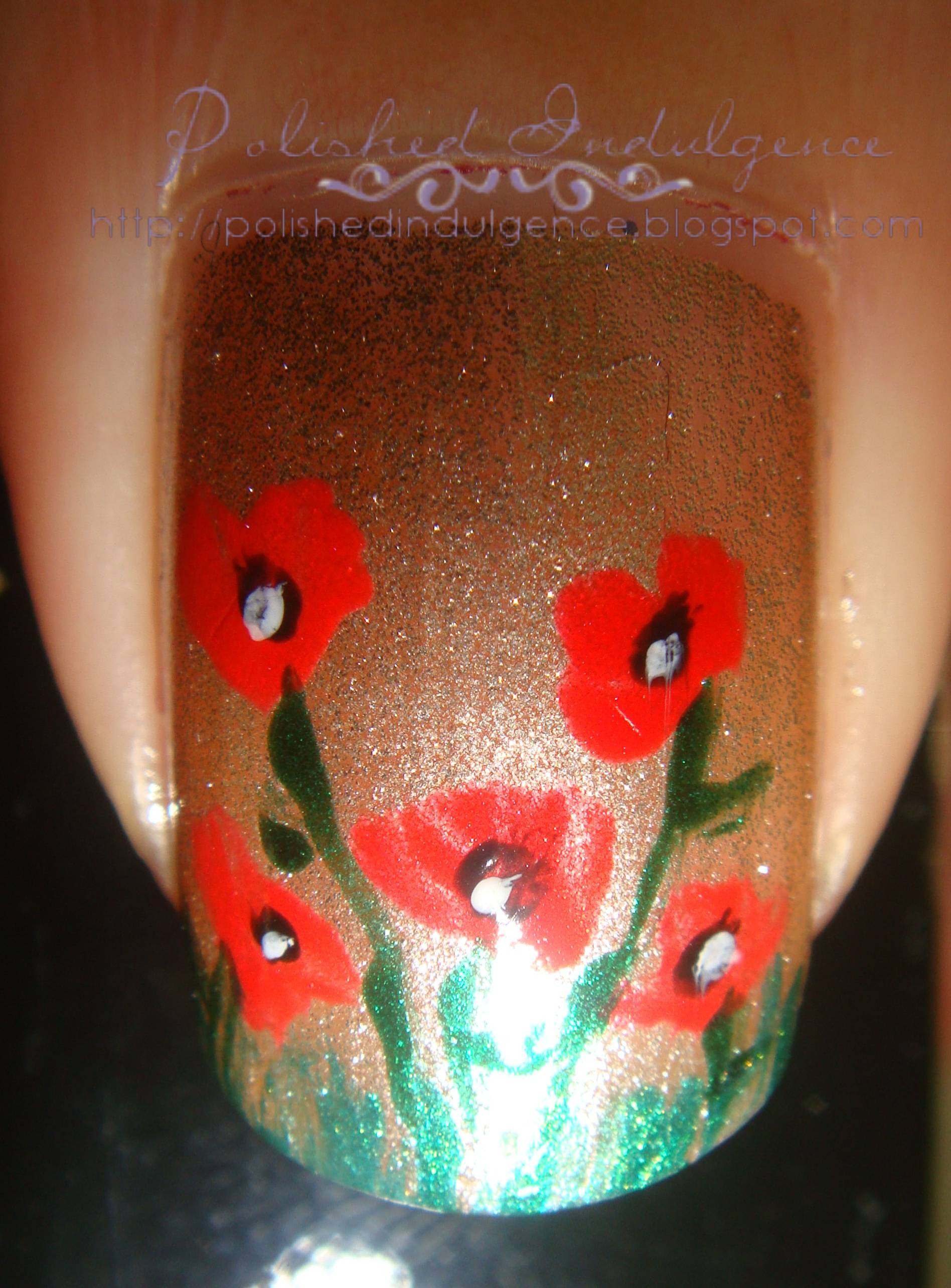 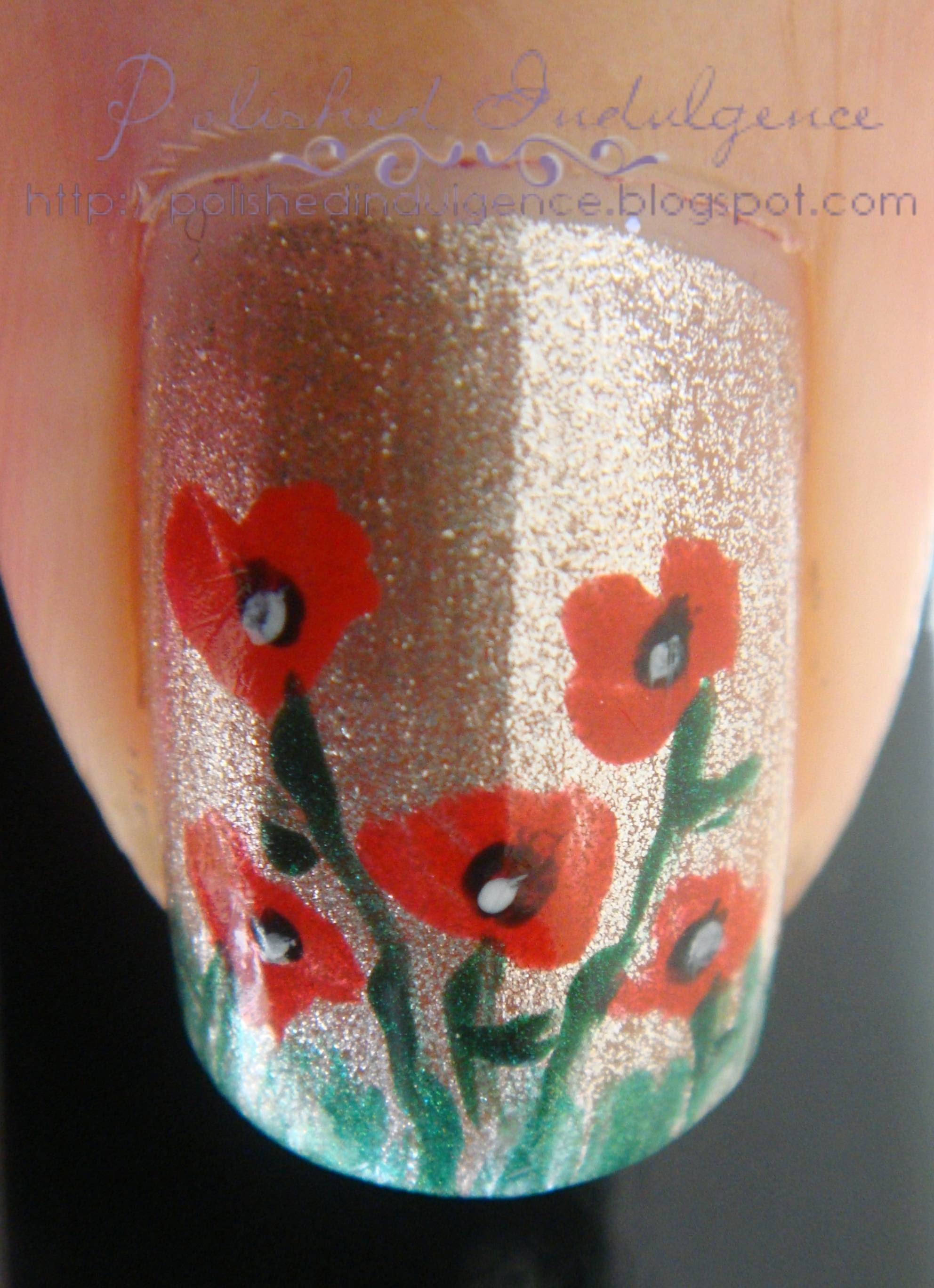 Thumb without flash. (Sorry about the reddish cuticles; CC Red-ical Gypsy stained them.) 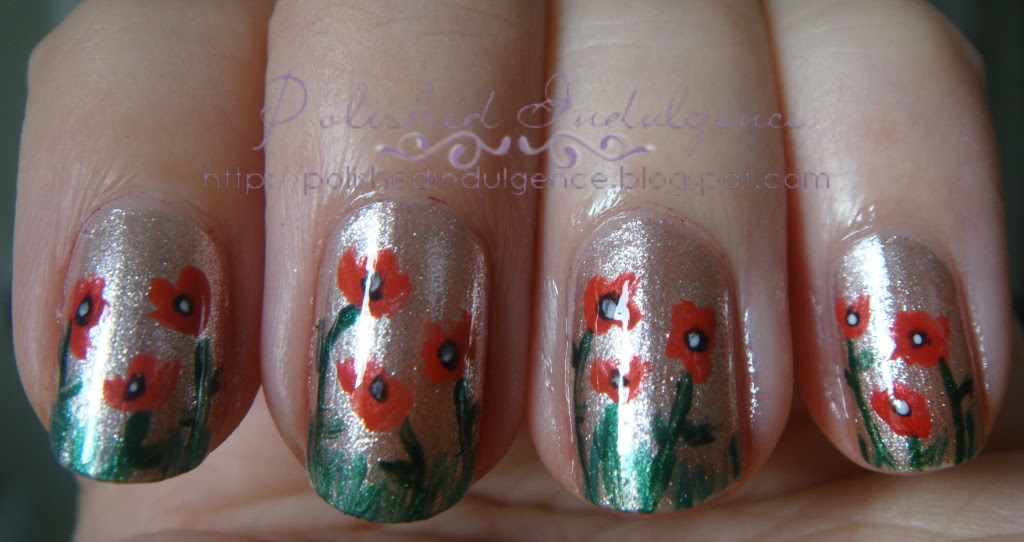 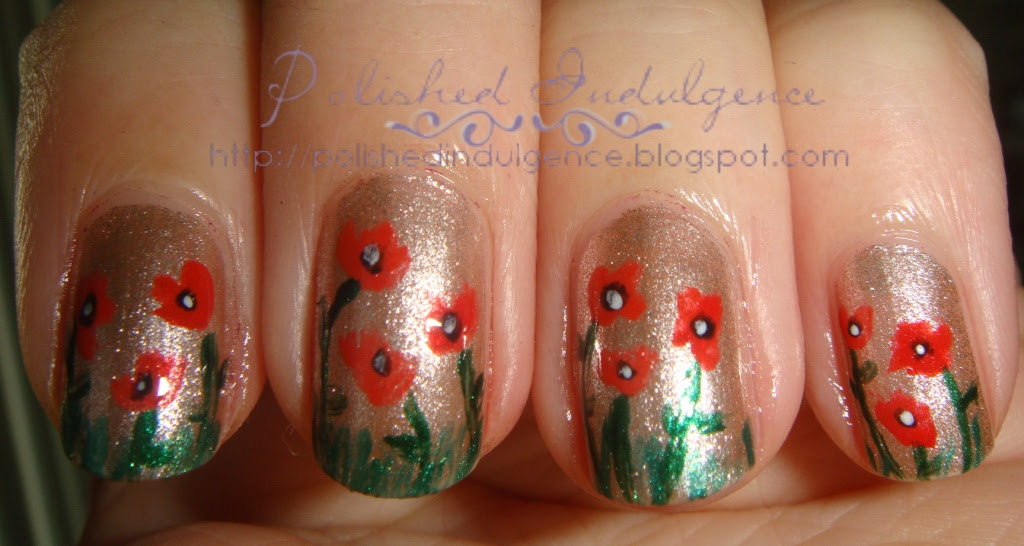 Up close and personal. (Natural light/Flash) 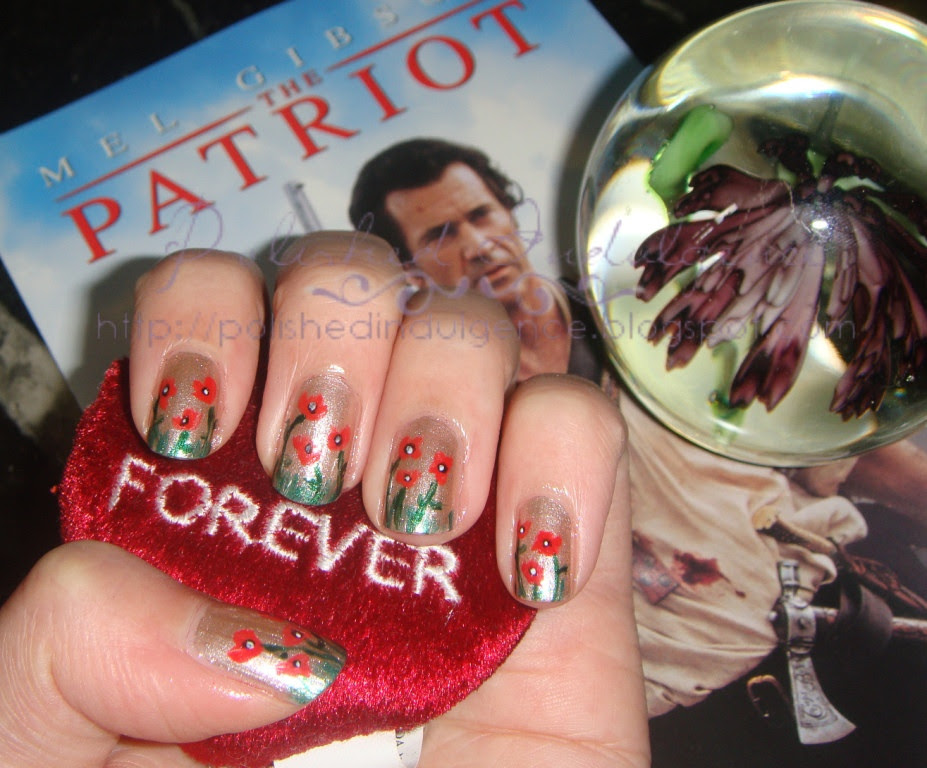 Another Mel Gibson photo for any of his fans out there.


The only other thing I might have done differently is to sponge a bit of brown closer to the cuticle to get the effect of the clouds in the inspiration photo before painting on the red poppies. That would probably have made it more interesting. Ah, well. There's always next time.
Hammie asks: Is anyone in your family a veteran who fought in one of the World Wars? What is your stand towards armed conflict: is it a necessary evil or do you think there are other effective ways conflict can be resolved? How do you feel about the theft of the poppy boxes in various stores?
Posted by Carmela at 7:00 a.m.