With November coming to a close, I thought it would be appropriate to end it donning moustachioed nails in support of Movember, the annual fund raising event for men's health and prostate cancer research. Mr. J participated unofficially (in all honesty I think this was about the only time he felt it was justified to sport any sort of facial hair) so I'm beyond ecstatic to have his face back. Now, I wanted to put my own twist to it and didn't want it to be just like any other moustachioed nails. I thought about doing different types of moustaches on each nail but wanted to take it a step further: why not sport famous moustaches based on video game characters? I love me some video games (in fact, Mr. J and I met while playing a video game but that's a story to tell on another day) so what better way to incorporate that with Movember? 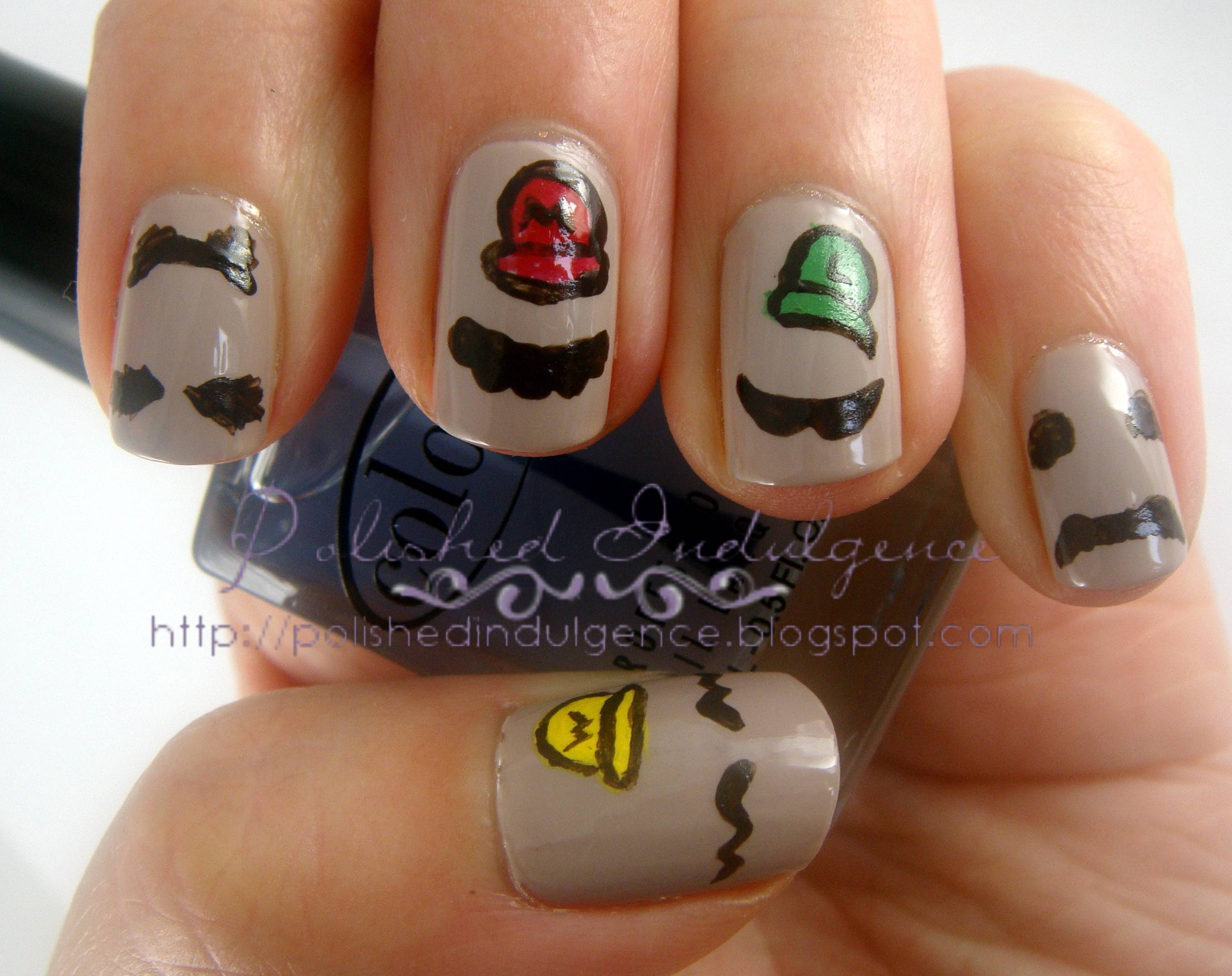 Can you guess who's who? Three are easily recognizable but the villains aren't as easy to place.

What I Used:
Pale beige base: Color Club Nomadic in Nude
Acrylic paint in dark brown, yellow, green and red

How I Did It:
1. First, paint all your nails in the base color of your choice. I went with a pale beige, Color Club Nomadic in Nude.
2. Using dark brown acrylic paint and a detail paintbrush, paint the different moustaches for each character you'll be doing; one on each nail situated close to the free end of the nail. It helps to have photos of each in front of you while you paint so you can easily check your progress and adjust accordingly. It might also be a good idea to try drawing them on paper before painting directly on the nail so you know ahead of time what strokes you'll need to use. For Mario (middle), I started with a U curve and added the 5 scallops before filling it all in. For Luigi (ring), I also started with a U curve, did only 2 scallops and filled it in. For Wario (thumb), I started with a ^ on each side to mark the middle, making sure I leave a bit of space in the between, and continued the zigzag pattern. For Dr. Wily (pinky), I started with a ^---^ for the top part of the moustache and made the bottom look raggedy while making sure that the 2 ends on opposite sides were prominent before filling it all in. For Eggman (index), I started with > < to mark the middle and just made it look as bushy as possible.
3. Paint on the head gear. Caps in the designated colors for Mario (red), Luigi (green) and Wario (yellow) where painted in color before outlining with the dark brown and painting on the corresponding letters. Dr. Wily has no head gear so we're painting on his hair which looks like bat wings on either side with a lot of space in the middle. Eggman has goggles/headband of some sort that we'll try to approximate.
4. Top it all with top coat to seal in the designs and protect your manicure.
***I apologize for the lack of photos/graphics but doing freehand nail art is hard to explain with photos and doing the graphics can be time consuming if I showed each stroke I used with arrows to show direction. But if anyone is interested to see graphics, do please let me know and I'll update accordingly. 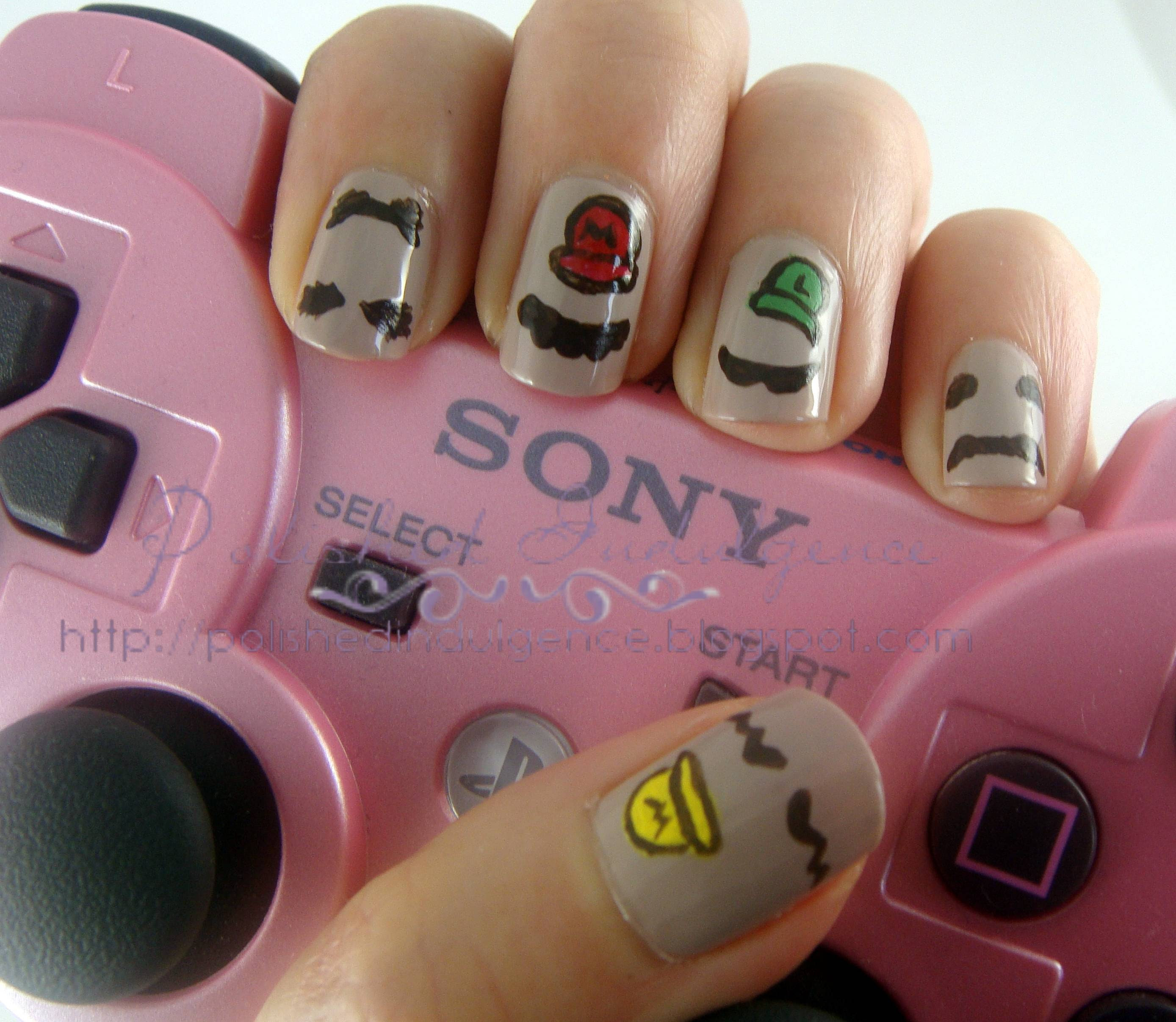 I know most of these are Nintendo characters but I don't have a Wii or DS so Playstation controller, it is. 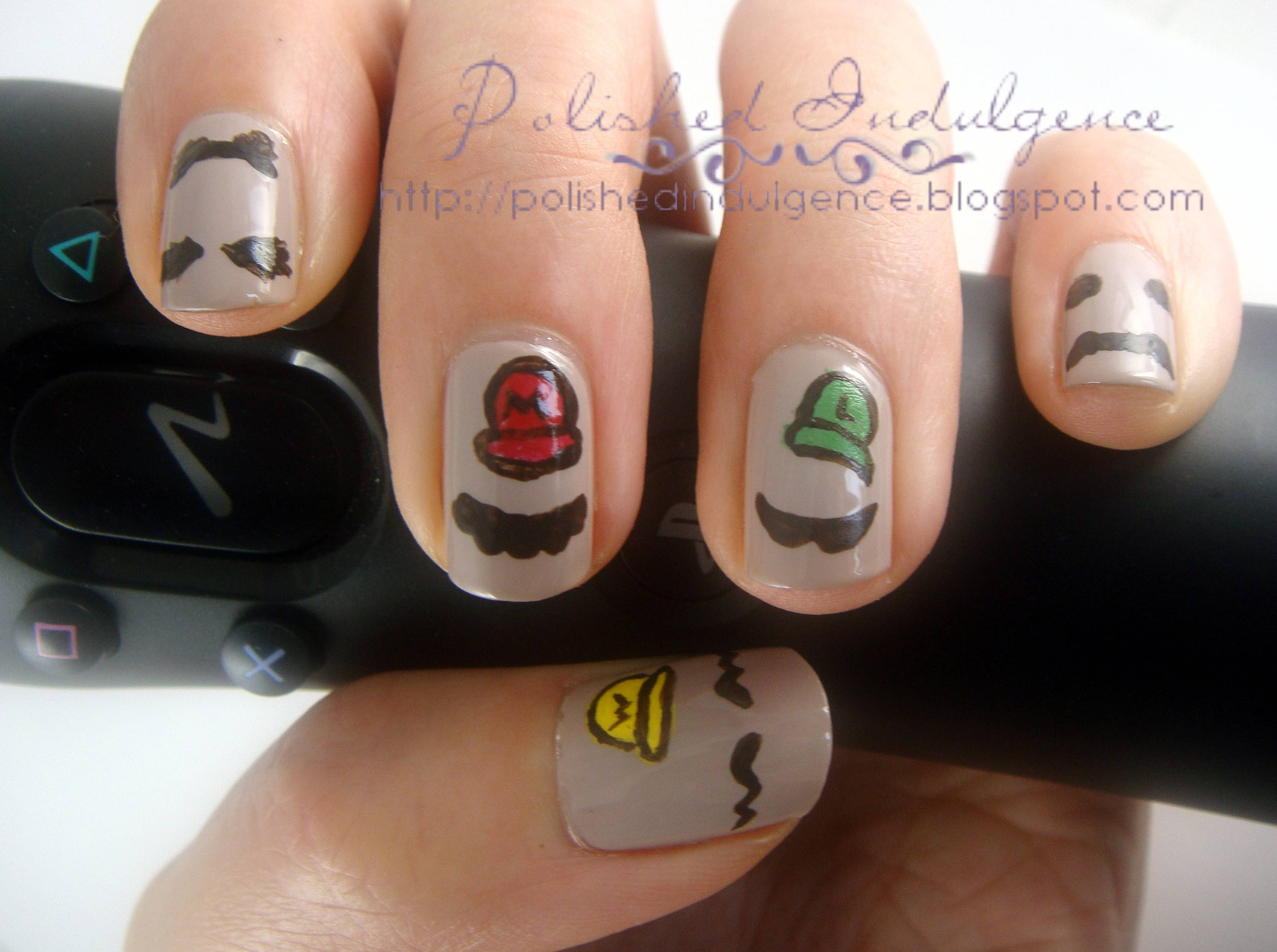 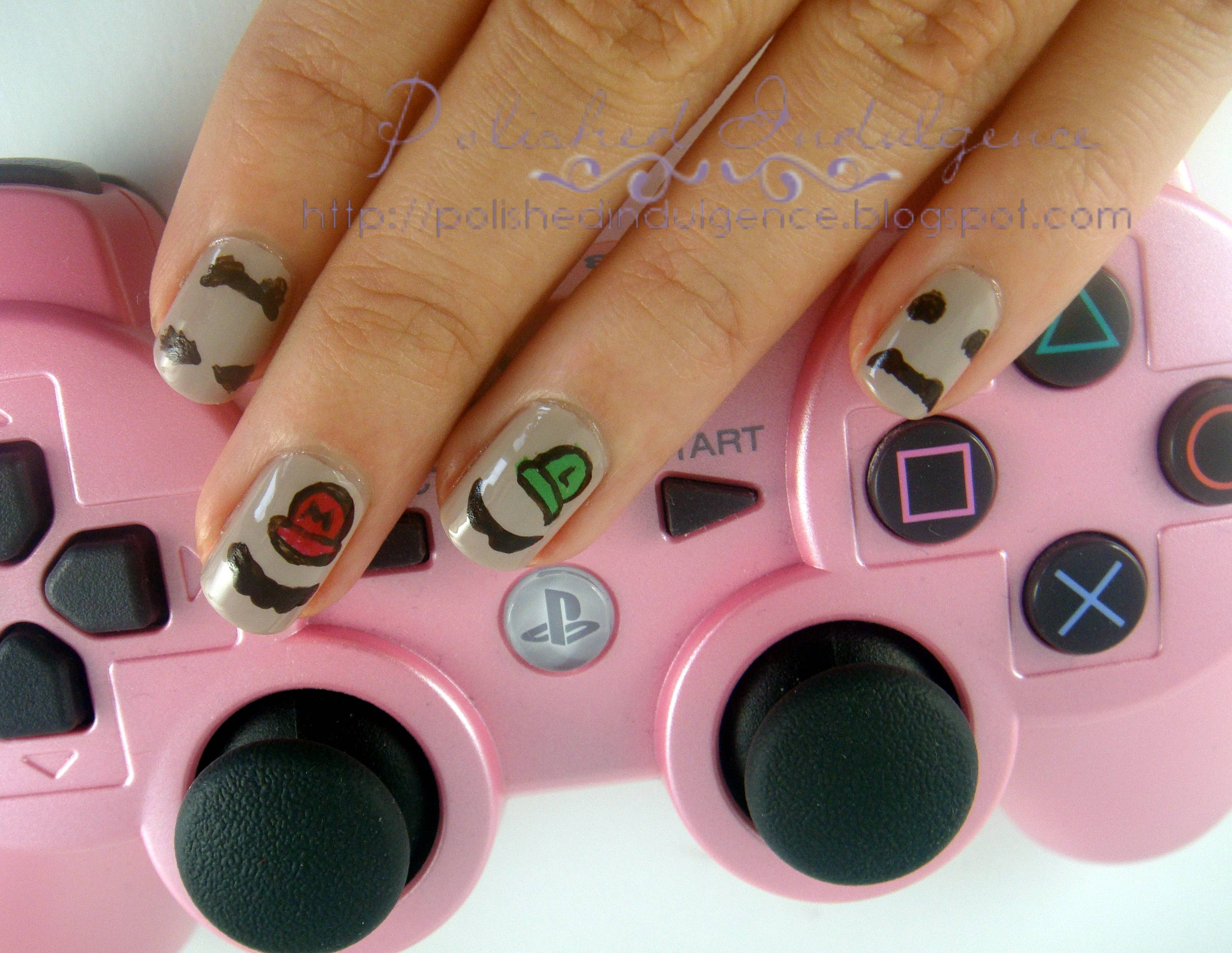 Yes, I own that pink controller. 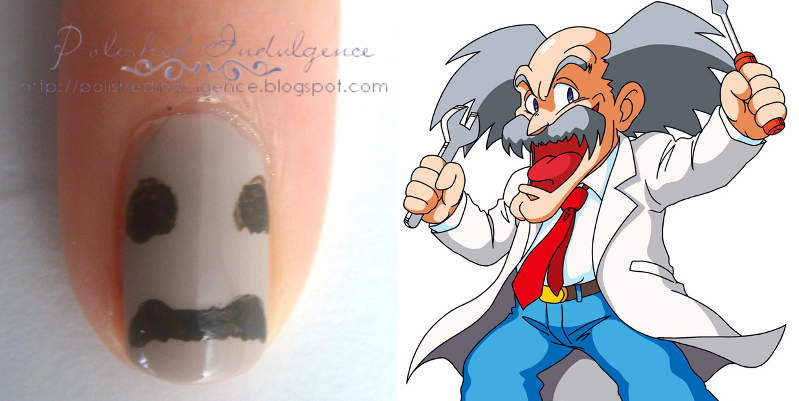 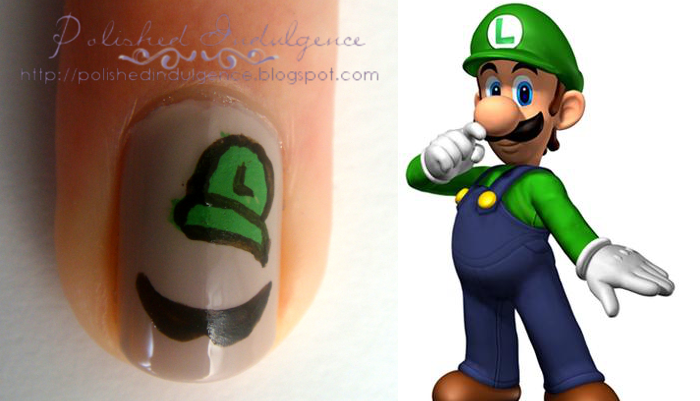 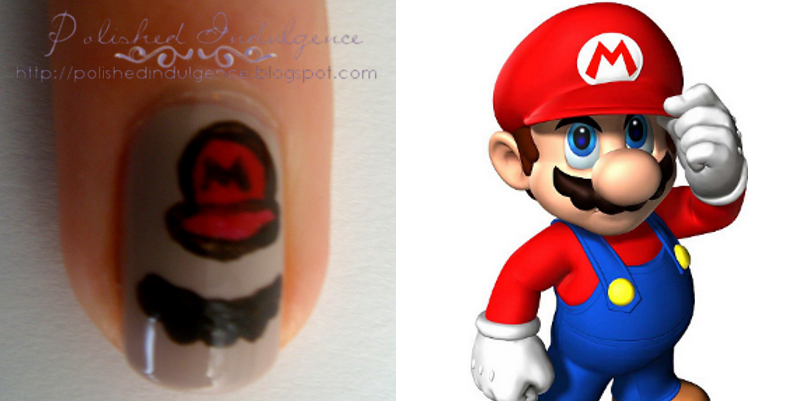 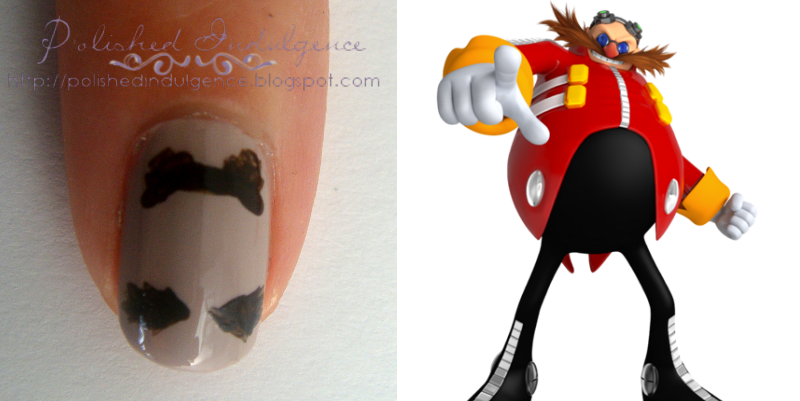 Eggman from Sonic the Hedgehog 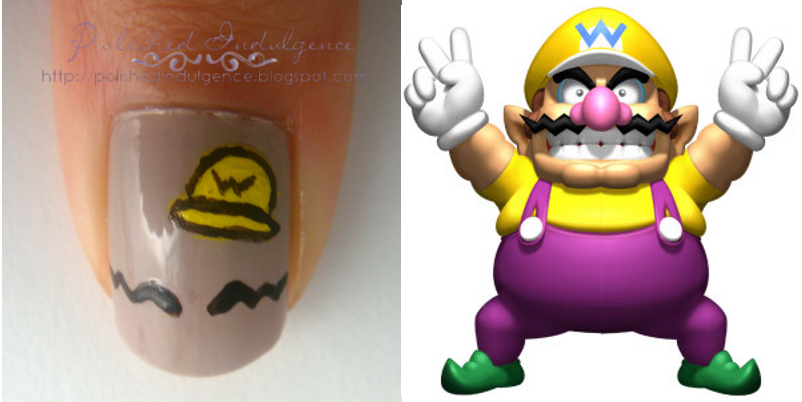 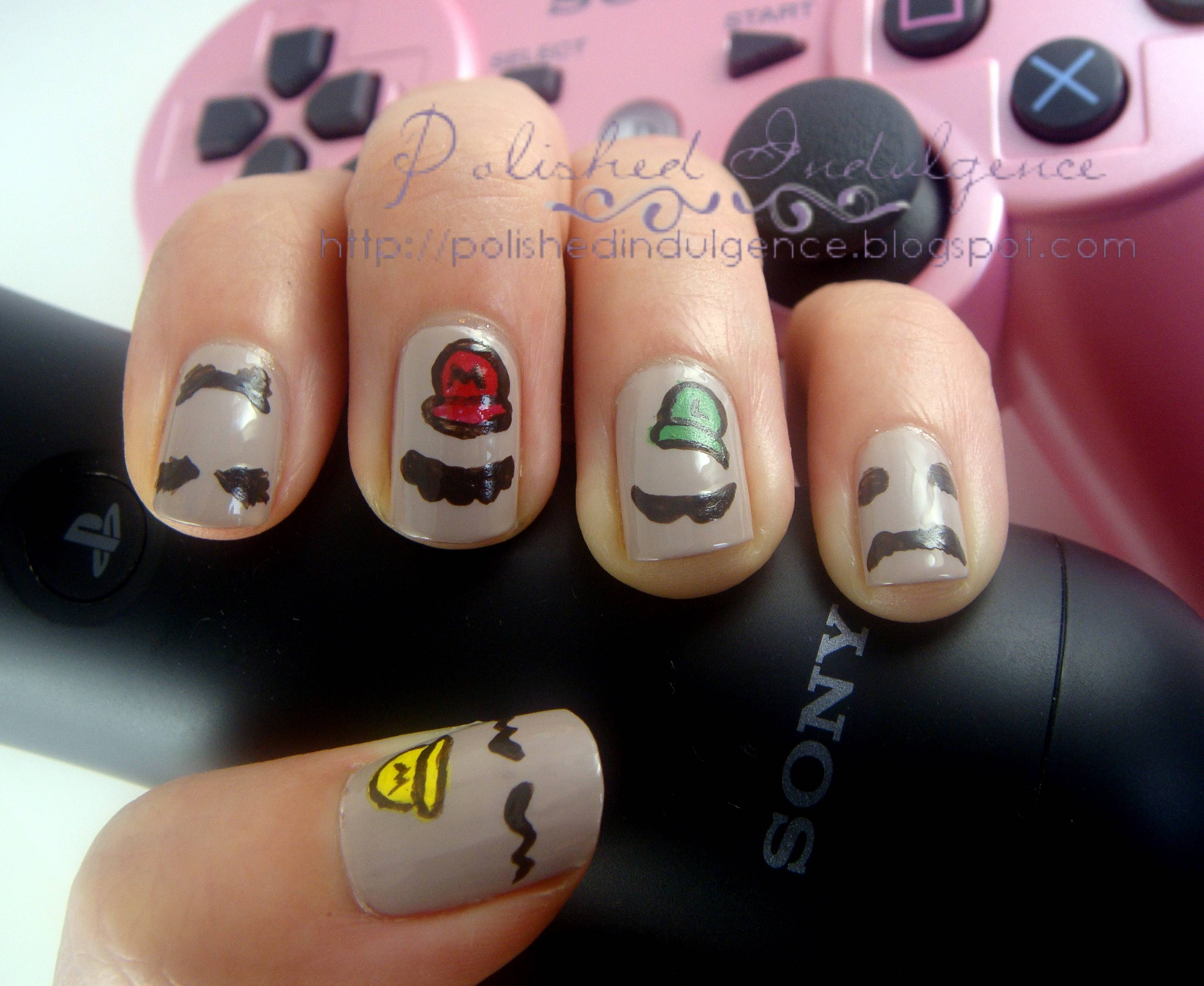 Hammie says: Get your game on!


And because I had this stuck in my head the entire time I did the nail art and wrote this post, I thought it only fair and more than a little appropriate to leave you with a moustachioed fellow beatboxing while playing the flute. Enjoy!