Pumpkins. Falling leaves. The one fruit Mr. J can eat boxes and boxes of. What do they have in common? You guessed it right: Orange! This is one funny color. Funny in a weird kind of way. When I think "orange" it usually brings to mind both summer AND fall which I find strange because those two almost feel like polar opposites. But maybe it's because of how one transitions into the other that allows orange to straddle both seasons.

When I got the China Glaze Haunting Collection, I have to admit that it was primarily for It's Alive. The swatches I've seen of the entire collection had me hoping they'd include one of the vampier shades in the 4pc set. So when I saw the orange shimmer alongside It's Alive...I'll be honest. It was a bit of a let down. However, on the nail, not so much. 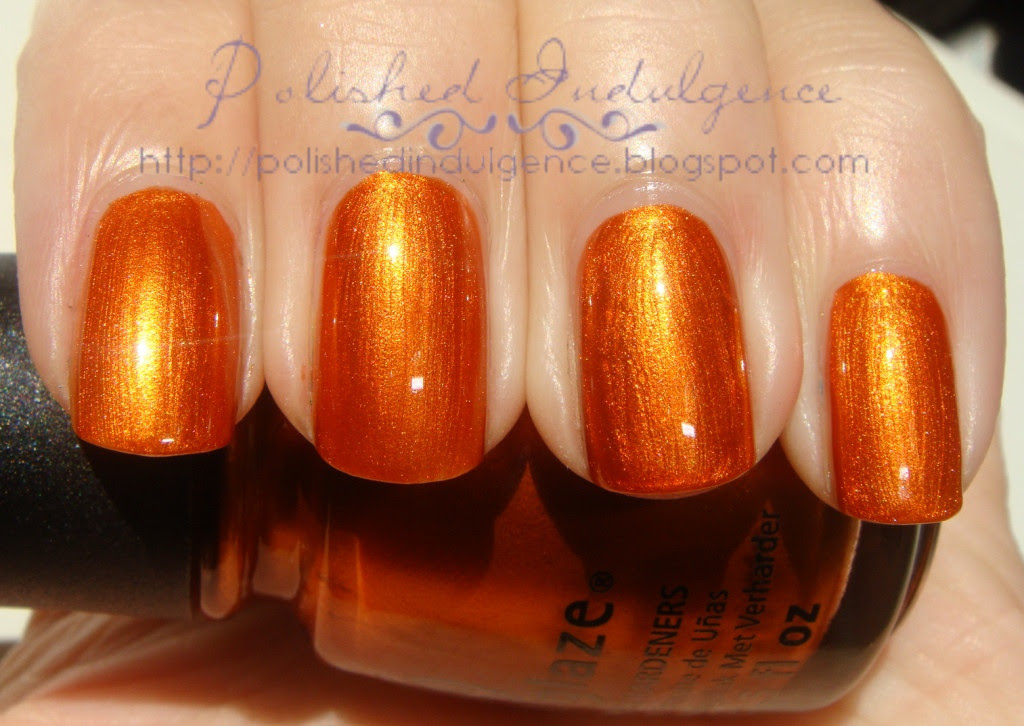 How could I stay unhappy wearing this?

Brand/Name: Chine Glaze Cross Iron 360
Color: Orange
Finish: Orange shimmer
Price: $6.49 CDN for 15mL or part of 4pc set at $14.99 CDN
Seen at: Trade Secrets, Sally Beauty
Note(s): Part of the Halloween 2011 collection from Sally Beauty, it's a re-issue of a discontinued color so it might be hard to find. It first came out in the Ski Collection 2007. 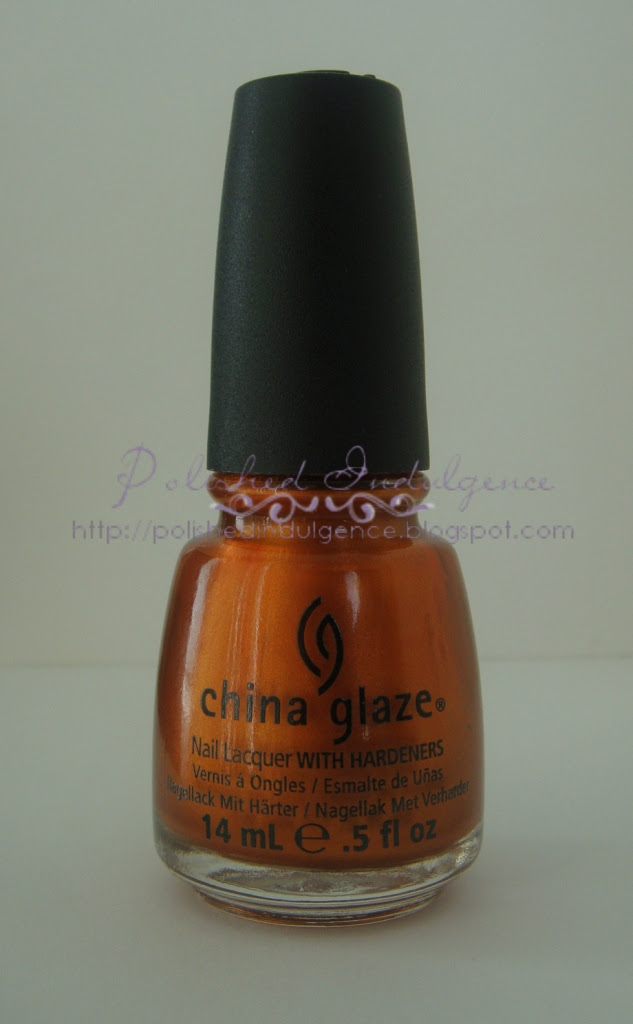 Not very impressive in the bottle. 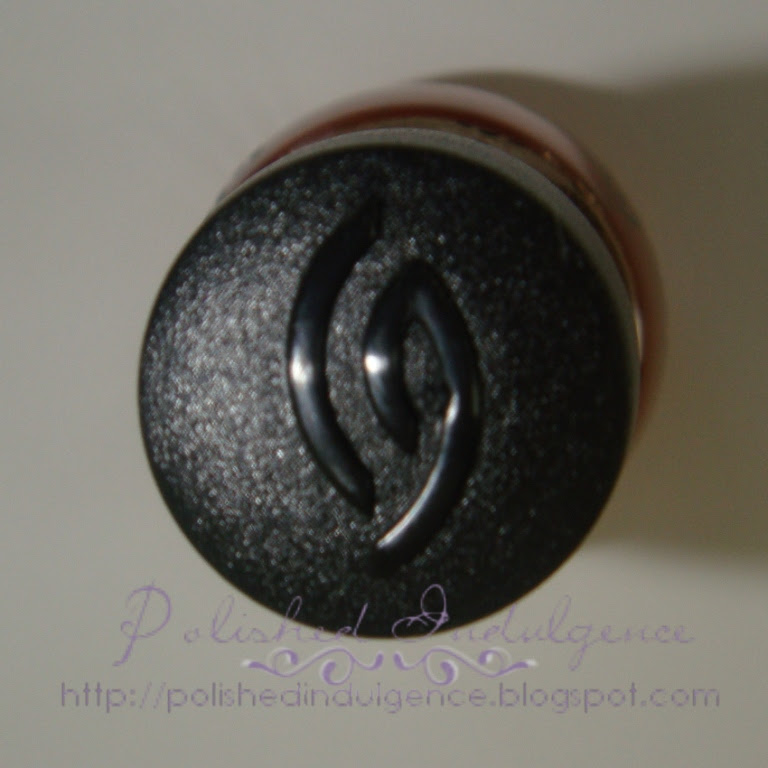 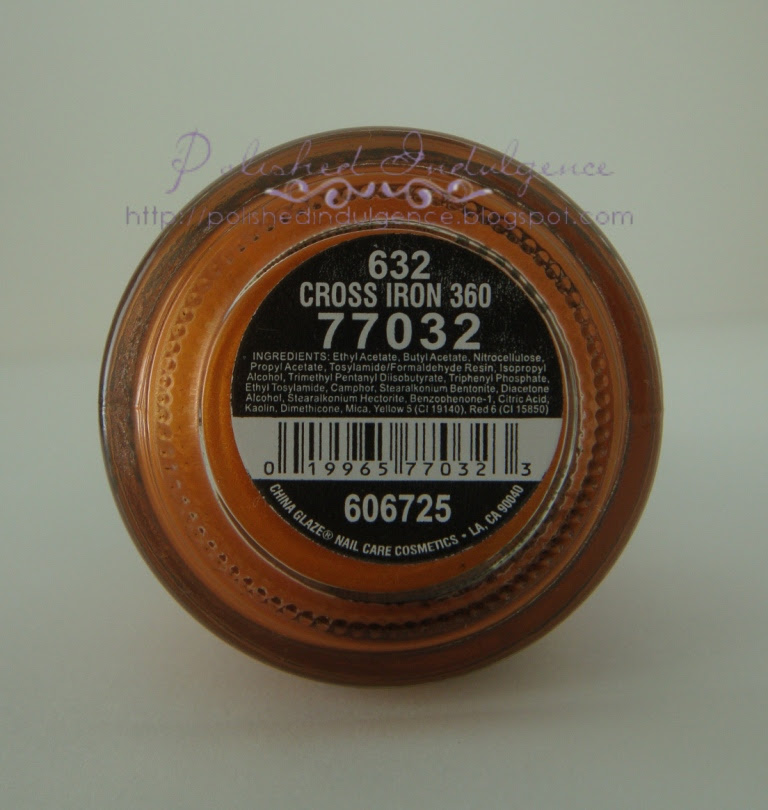 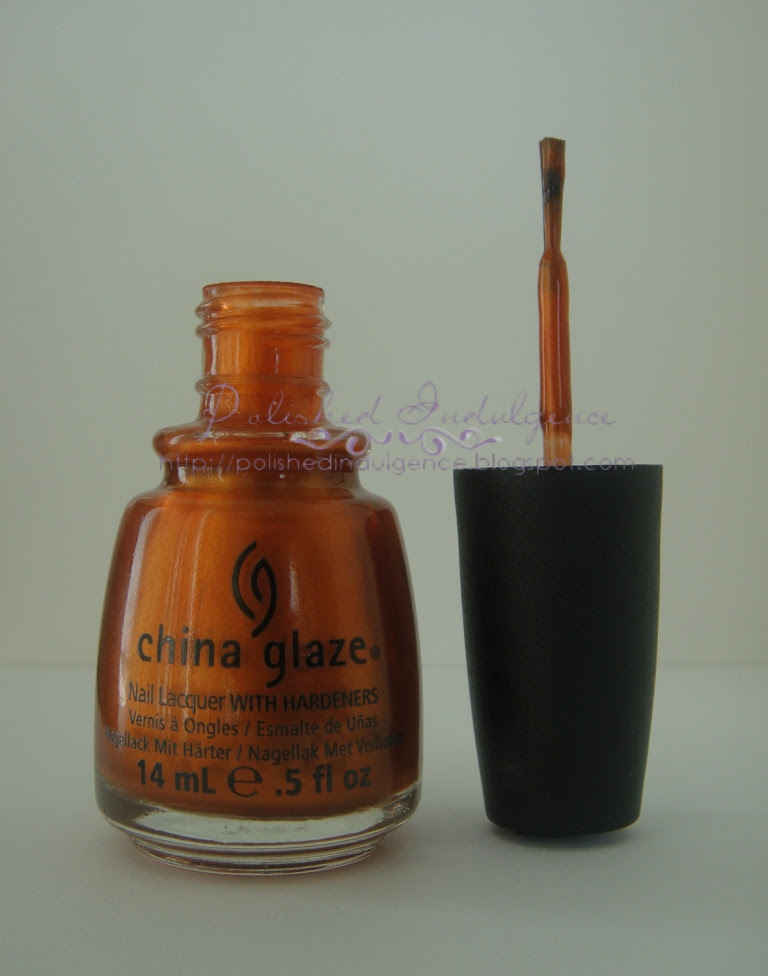 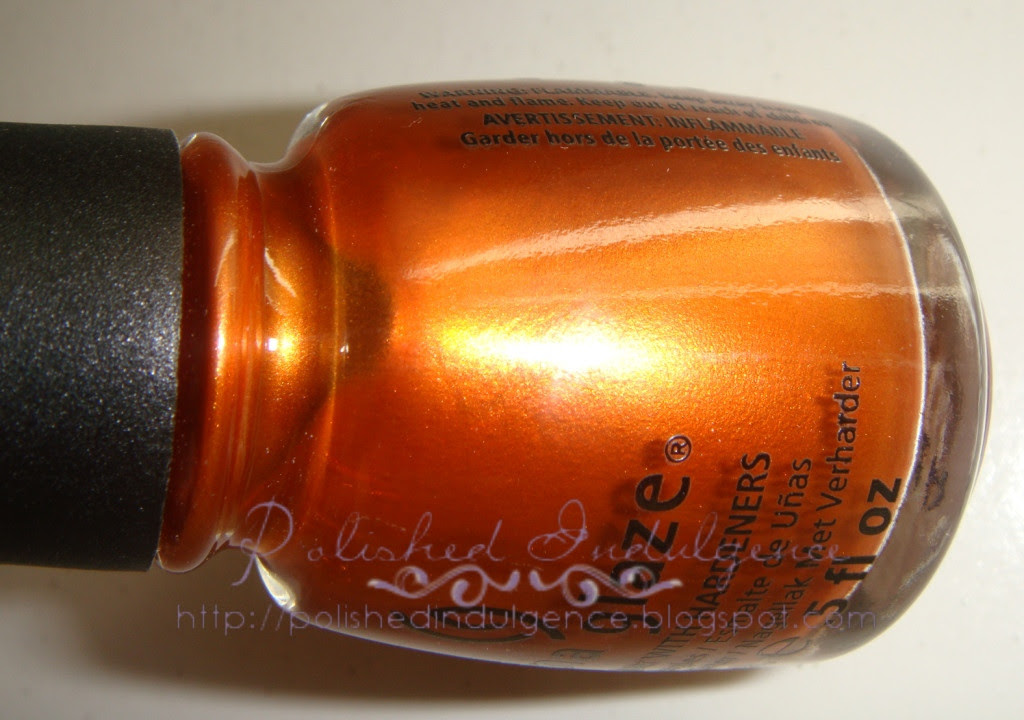 I was afraid it was going to come out frosty!
Orange isn't really my color. I shy away from it in clothing so it's no surprise that I do the same for nail polish. I find that with my complexion, it brings out the yellow undertones, making me look sallow and ill. Orange with more red or pink works best for me. Now, Cross Iron 360 is a full on orange. I thought it would go on frosty but it leans more shimmer and has that pretty lit from within aspect to it that makes it hard not to like. It dries with high shine and the self leveling formula makes for almost imperceptible brushstrokes.
***All nail swatches were done with Orly Bonder Base Coat and two coats of China Glaze Cross Iron 360 unless stated. 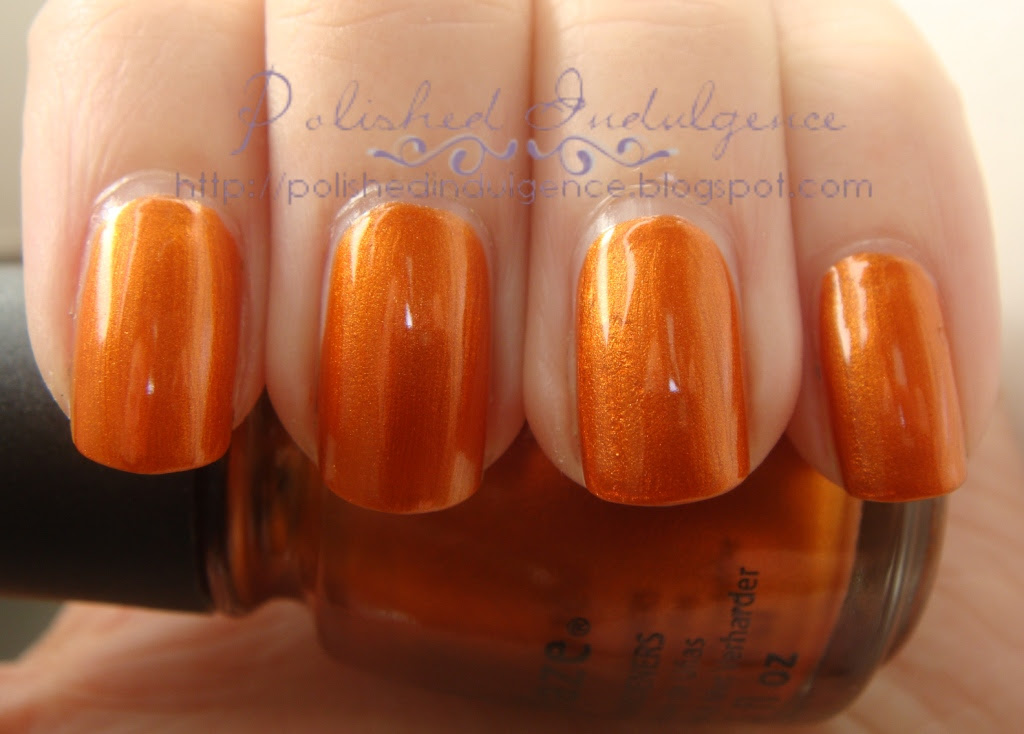 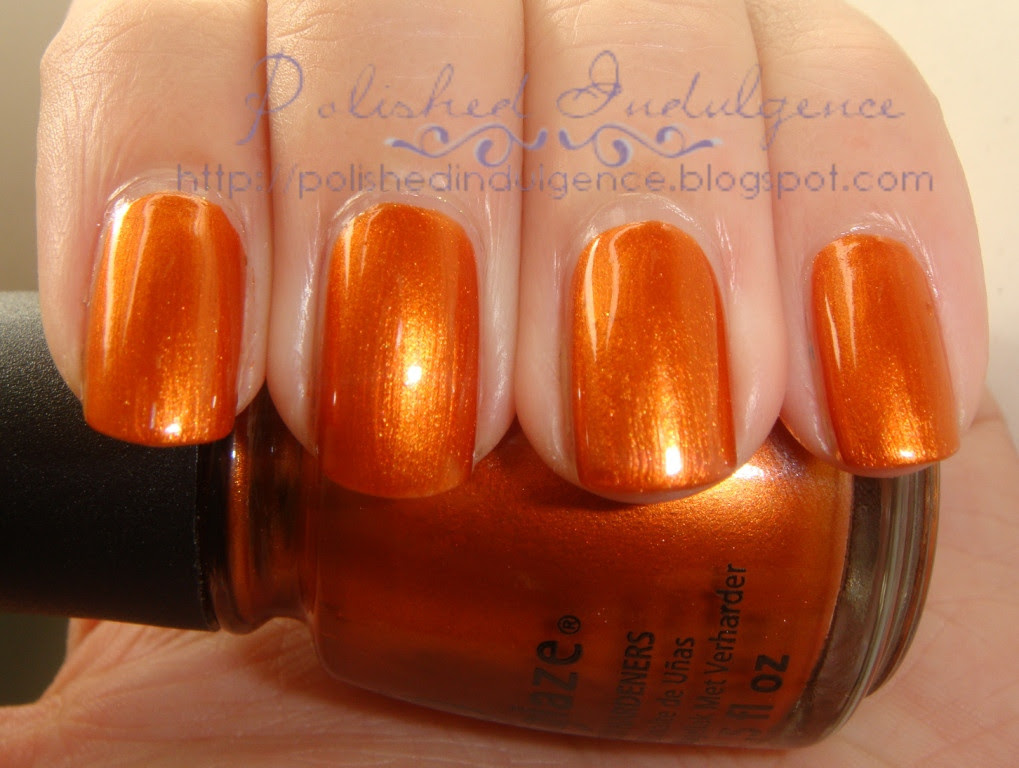 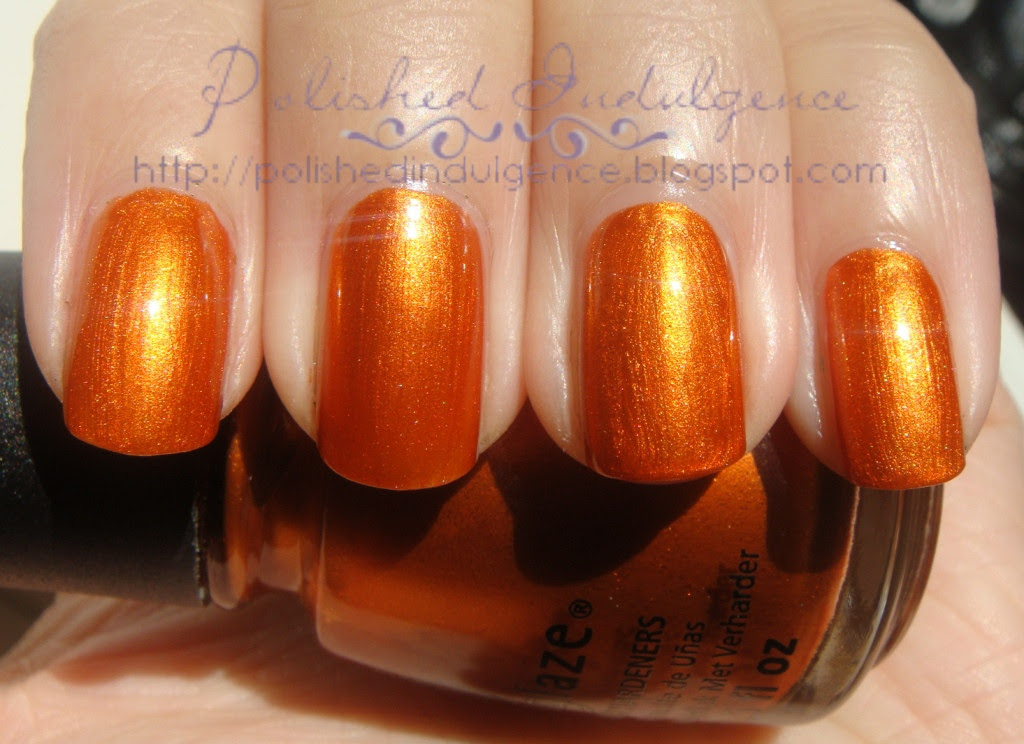 Sunlight/No top coat/No flash
Even better in the sun!
The brush works well with the formula on this one. I lucked out with the consistency (yay!) which gets the Goldilocks seal of approval. It goes without saying that I didn't have trouble with application at all. This one applied like butter, smooth and even, but a one coater, this one isn't. It needs at least a couple coats to get full opacity but even then it dries fairly fast and is dry to the touch in give or take 5 minutes. 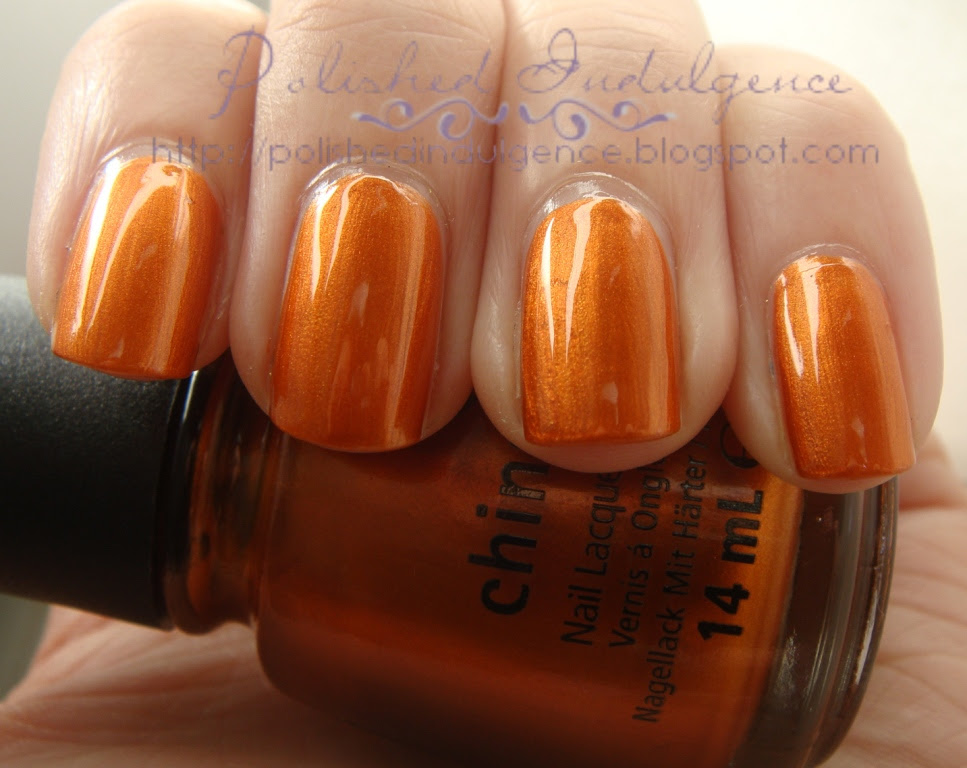 Natural light/Top coat/No flash
Not much difference since it's already so shiny to begin with! 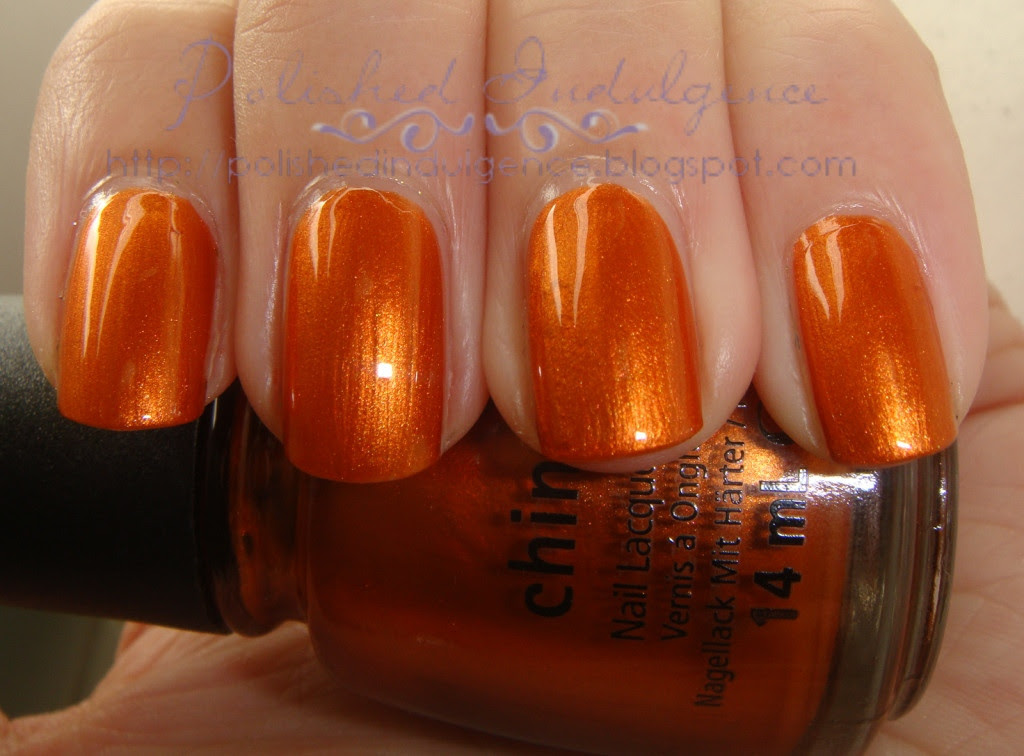 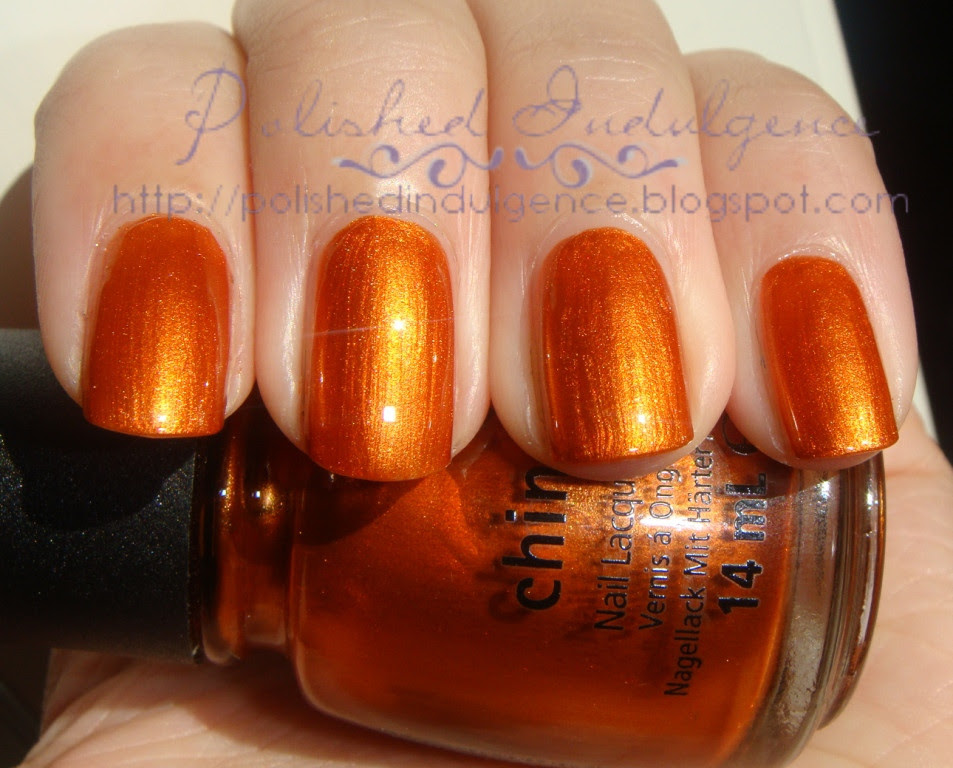 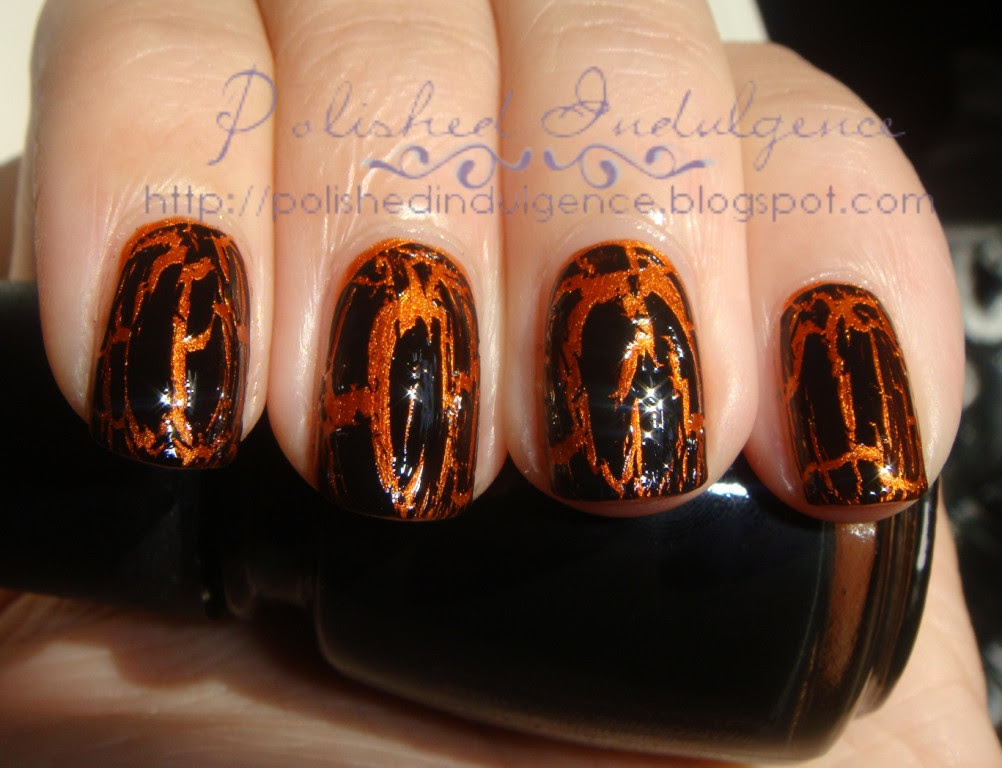 Of course I had to put Black Mesh on top of it.
A little cliche, but it screams Halloween all right!
Black Mesh changes the game for me. I never really cared for black shatter/crackle as I preferred the softer look of silver. With Cross Iron 360 though, the contrast works for me. Top coat was pretty moot with this one as the finish by itself is shiny enough.

Availability might be an issue with this polish. This color first came out in the Ski Collection waaaay back in 2007 and as far as I know has been discontinued. If you're like me who missed out on that, finding this in the Haunting Collection from Sally Beauty was a pleasant surprise. As for dupes, the closest I can think of is Cruisin' from China Glaze's Retro Diva Collection from 2009. Cross Iron 360 is still much darker but they share the same base color and finish. For a long discontinued polish, I sure got this for a steal at $3.75 as part of the set. That makes value for price awfully good.

Now I'm torn. I'm not quite fond of orange but I do appreciate how it looks like copper in some angles and that glow-y, lit from within aspect to it is so pretty.

Hammie loves this polish as it reminds him so much of food. The fact that it's an older discontinued polish makes it such a great find! But it just doesn't have the oomph that Hammie looks for. His final score?

8 Hammie Points!
Happy Friday! Yay for the weekend! Do you love orange? Would you wear a color even if clashes with your skin tone?
Posted by Carmela at 8:00 a.m.