Ever seen a nail polish color and knew you HAD to own it, by hook or by crook? First, it was Chanel Peridot, the one Chanel polish that *almost* made me break my self-imposed $10 maximum price per nail polish bottle. In the end, Hammie convinced me that $25 was just too much to spend on one nail polish when I could get four or more for the same price. (I've heard rumors that Hammie hails from the Hamstons but this is one sensible, penny pinching hamster so I don't think so!) Then, came Butter London's Wallis but at $14, it was still over my limit. These green/golds were killing me! Not even wearing Nubar Wildlife could kill the crazy lemmings from these two. So I hit the interwebs in search of something that might be similar (I was so far gone, I didn't even need a dupe) without killing my budget. This is what I found: 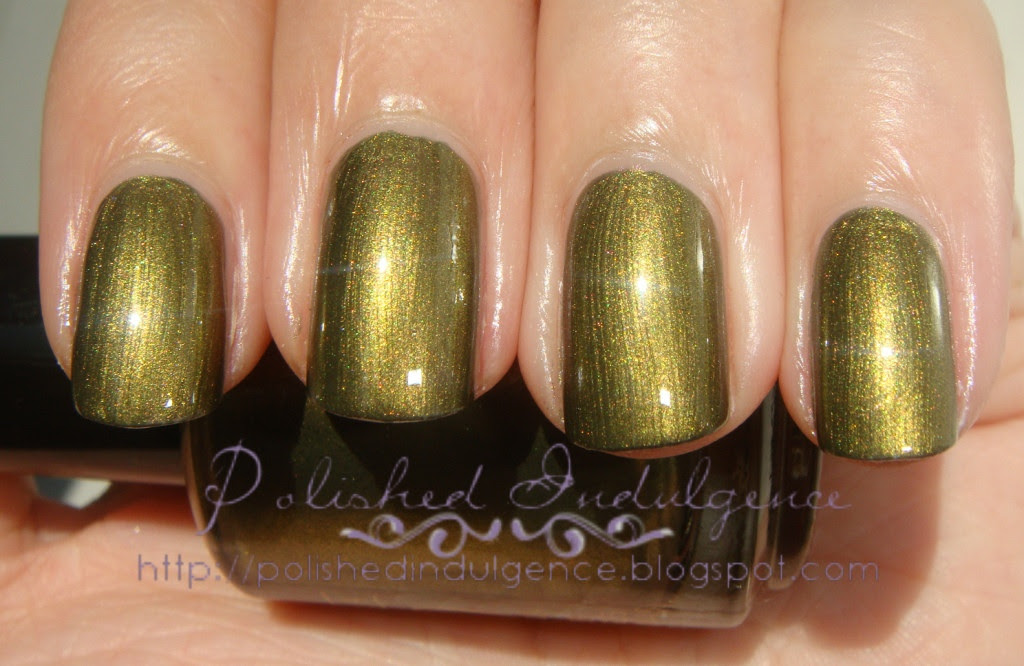 Look at that pretty!
The Quick Take

Brand/Name: Nina Ultra Pro Mossy Britches
Color: Olive green
Finish: Olive green shimmer with fine gold flecks
Price: $3.99 CDN for 15mL
Seen at: Sally Beauty
Note(s): (if I'm not mistaken) This is a Sally Beauty exclusive so finding this in a brick and mortar store might be tricky for those who don't have one in their area. 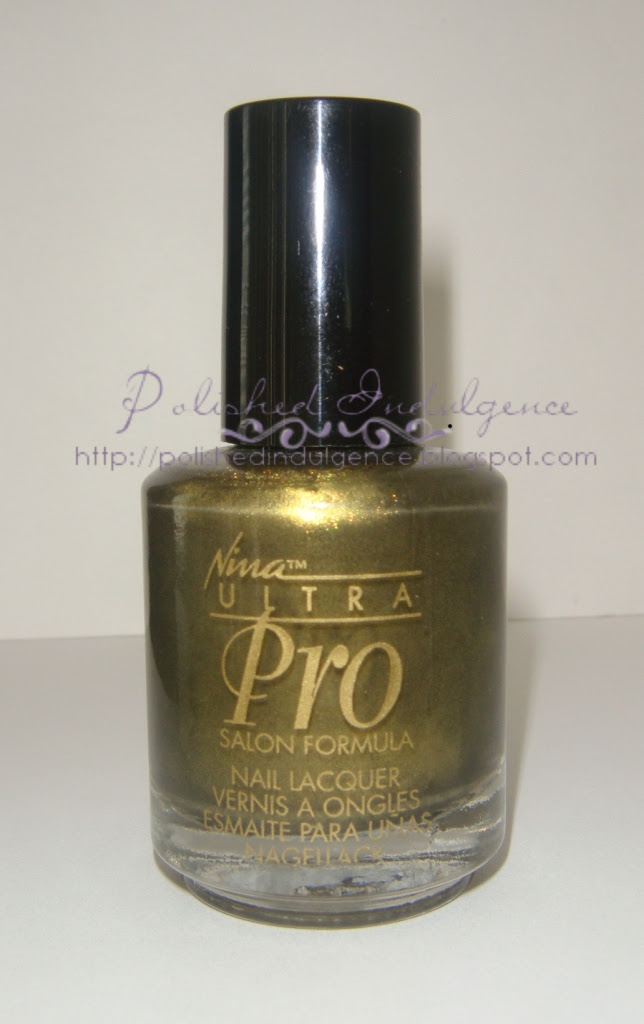 It's greenish gold! Well.. Olive green with a gold flash..? 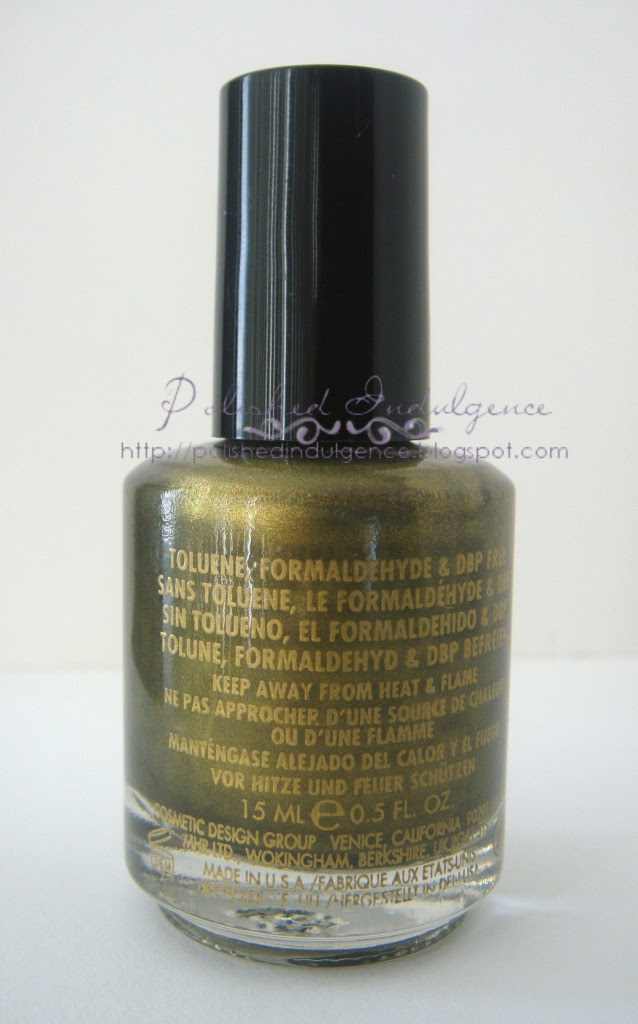 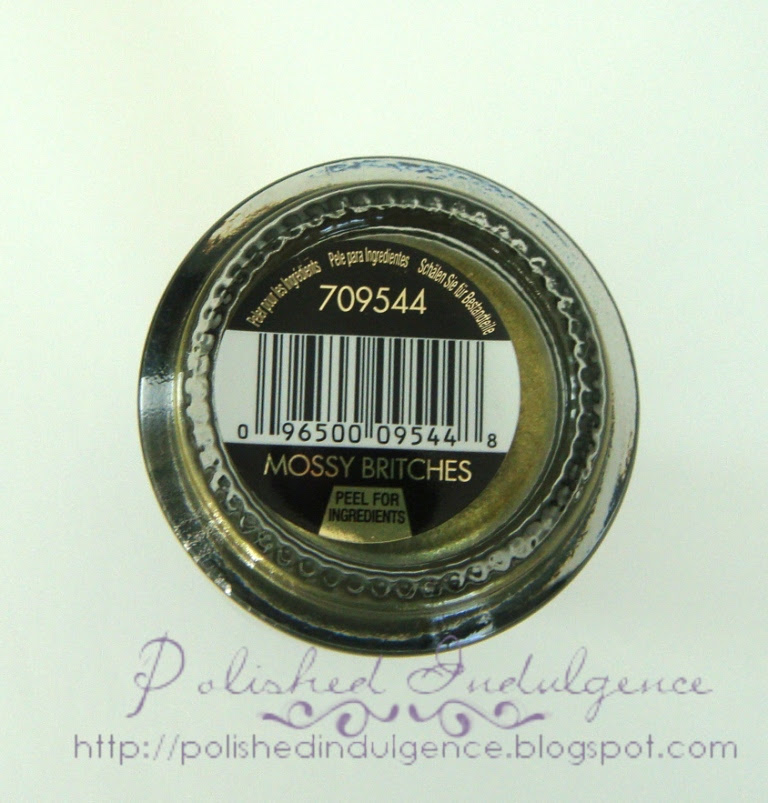 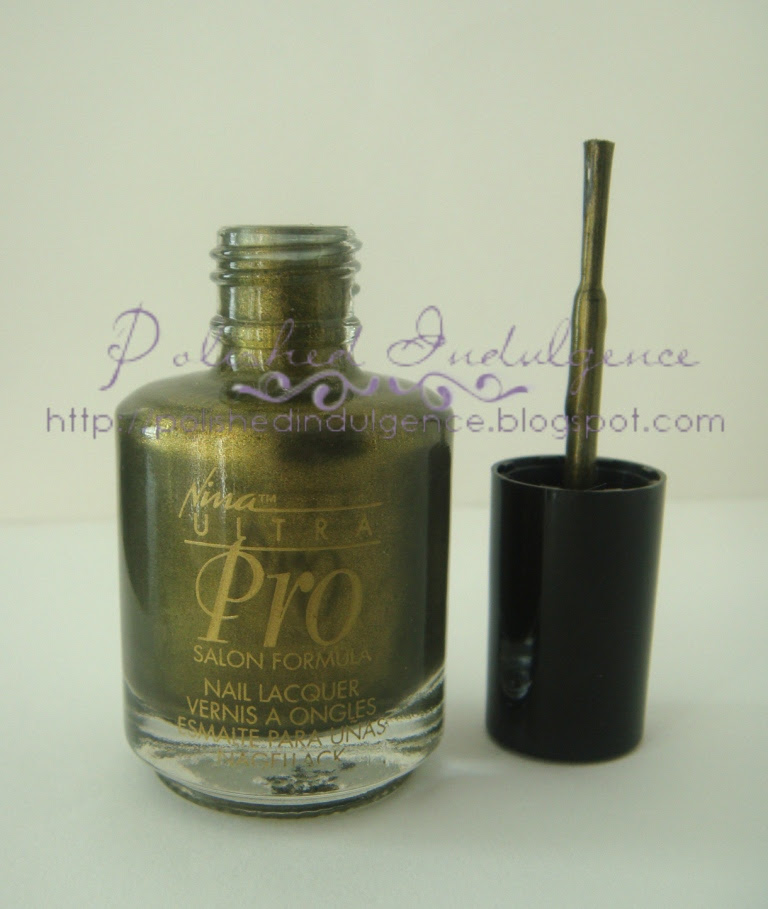 That shorter, thicker brush might take some getting used to. 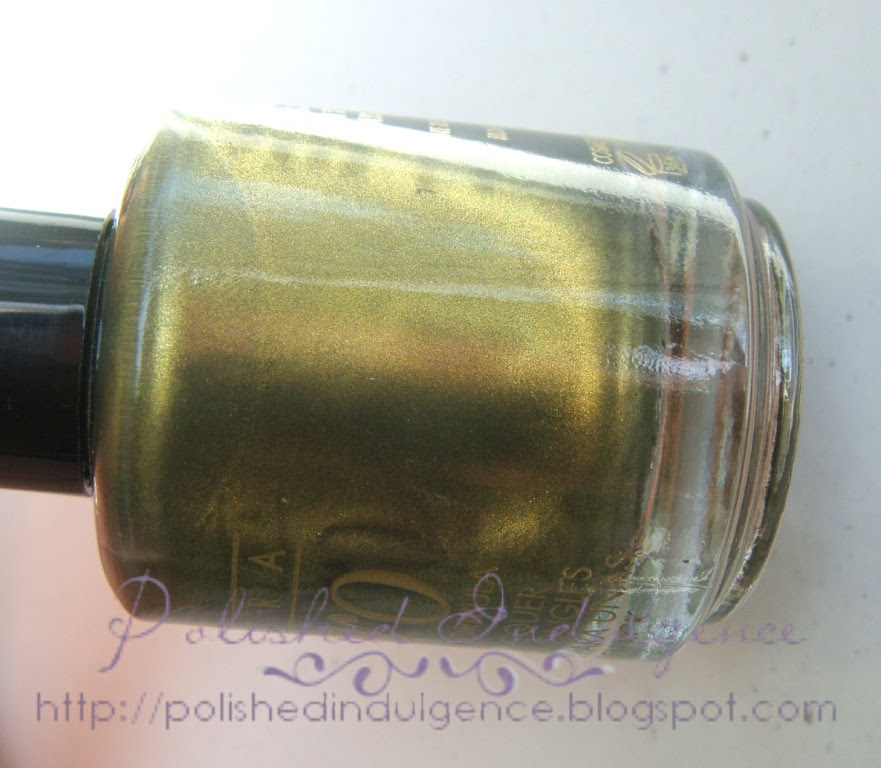 Tell me that doesn't remind you of Wallis. Sort of.
Mossy Britches is an olive green shimmer with a gold flash in very bright light. Sure, it's not a dupe of any of the two I mentioned earlier but this is a pretty color on its own. The color has a lit from within look that gives it that contrast at the edges where it looks blackened. Definitely not your run of the mill olive green! I was also debating whether the finish was shimmer or metallic, since if you look very closely, you'll see some very fine gold micro flecks. But it's just not a full on metallic, so I'd say this one walks the fine line between shimmer and metallic finishes.
***All nail swatches were done with Orly Bonder Base Coat and two coats of  Nina Ultra Pro Mossy Britches unless stated. 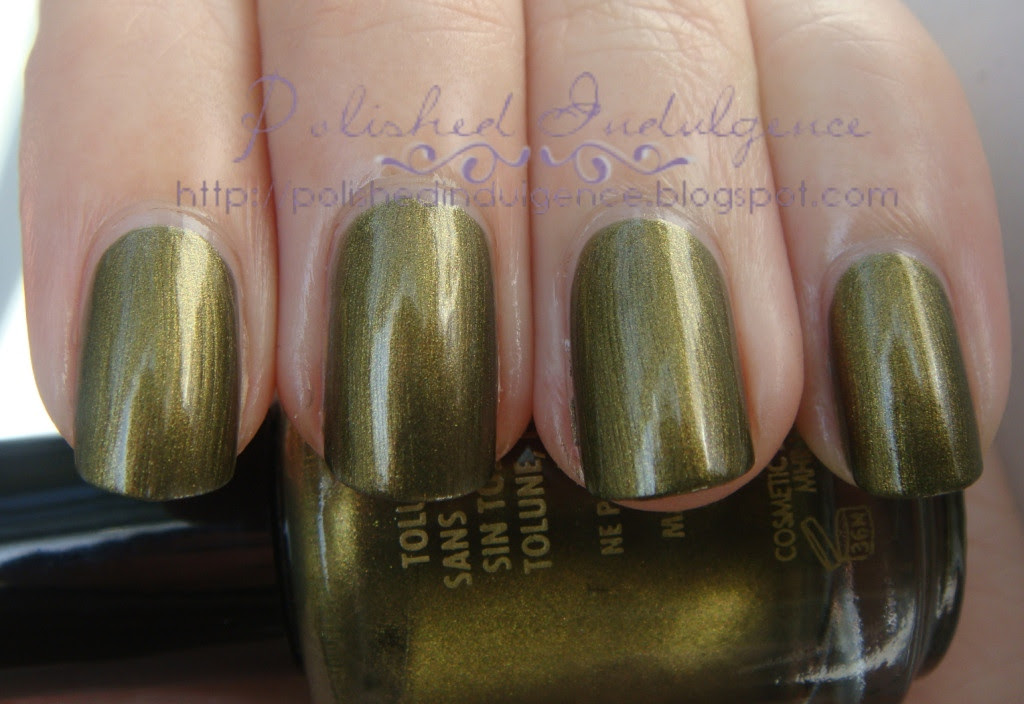 Natural light/No top coat/No flash
I was surprised at how relatively shiny this one dried to. 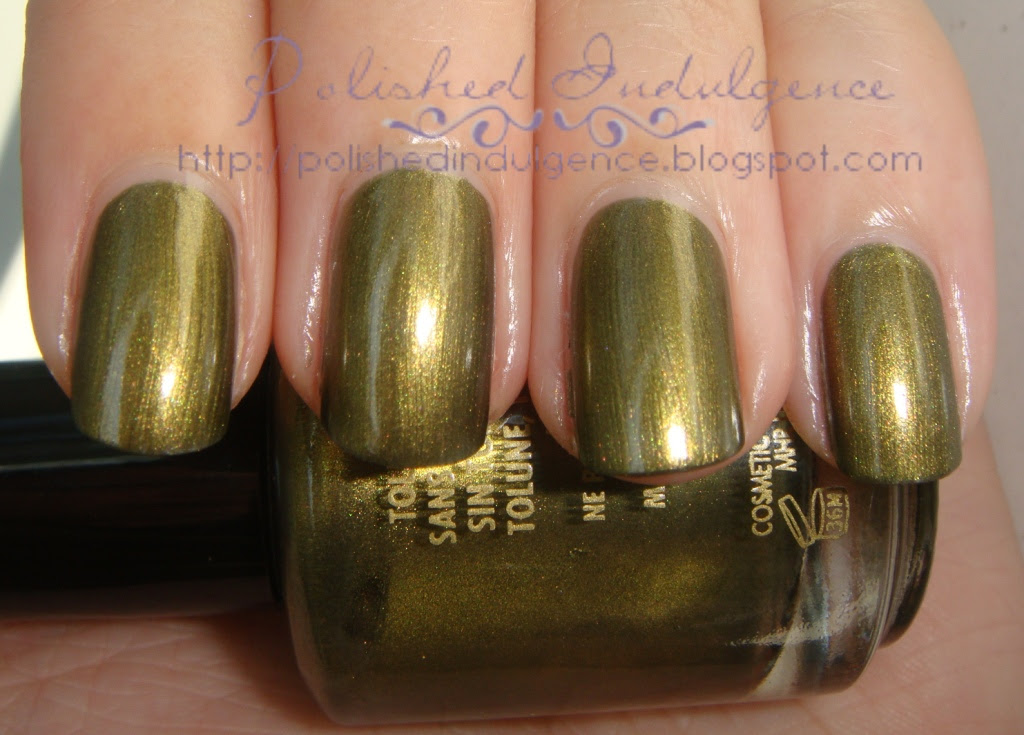 Natural light/No top coat/Flash
I love the darker edges to it! 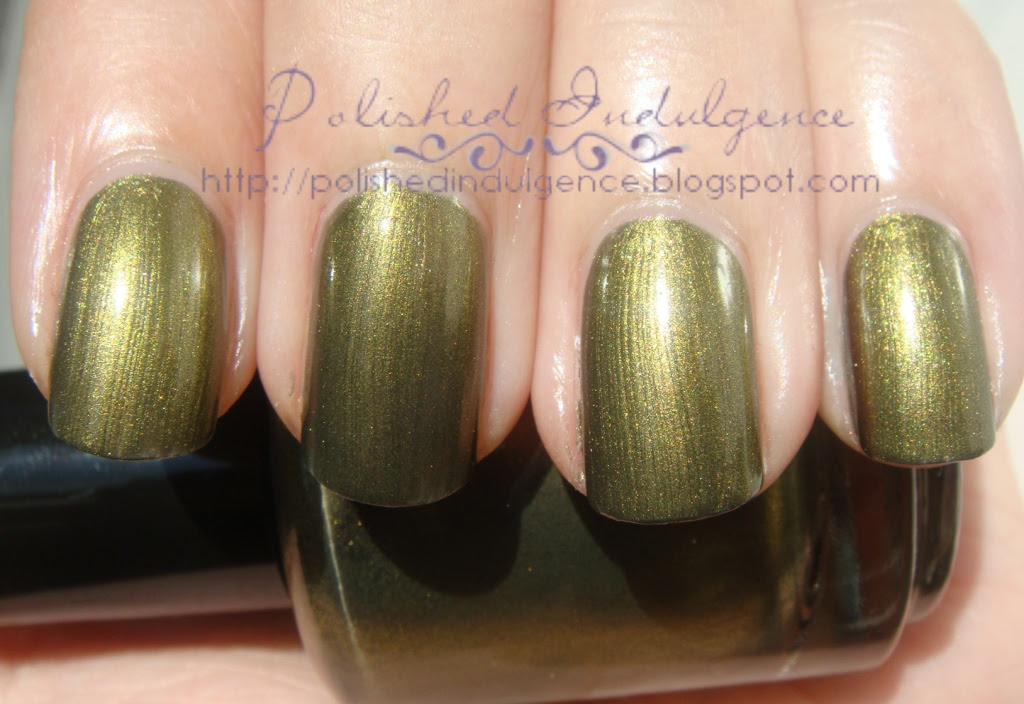 Sunlight/No top coat/No flash
Not a dupe, but gorgeous all the same.
The brush on this one has a shorter handle compared to the usual suspects (China Glaze, Orly, OPI) but it didn't give me any reason to hate it. The actual bristles though were on the thicker side so it tends to retain more polish than you might want, making pooling or too thick coats a definite possibility. But once you've figured out just how much polish you need, application becomes a breeze. The consistency is a little on the thicker but not so much that it's a pain to apply. It almost felt creamy, like a thinned out milkshake, if that makes sense, and impressive opacity. Mossy Britches was almost a one coater! It also dries fairly fast that I'm surprised it's not being touted as a fast dry polish. 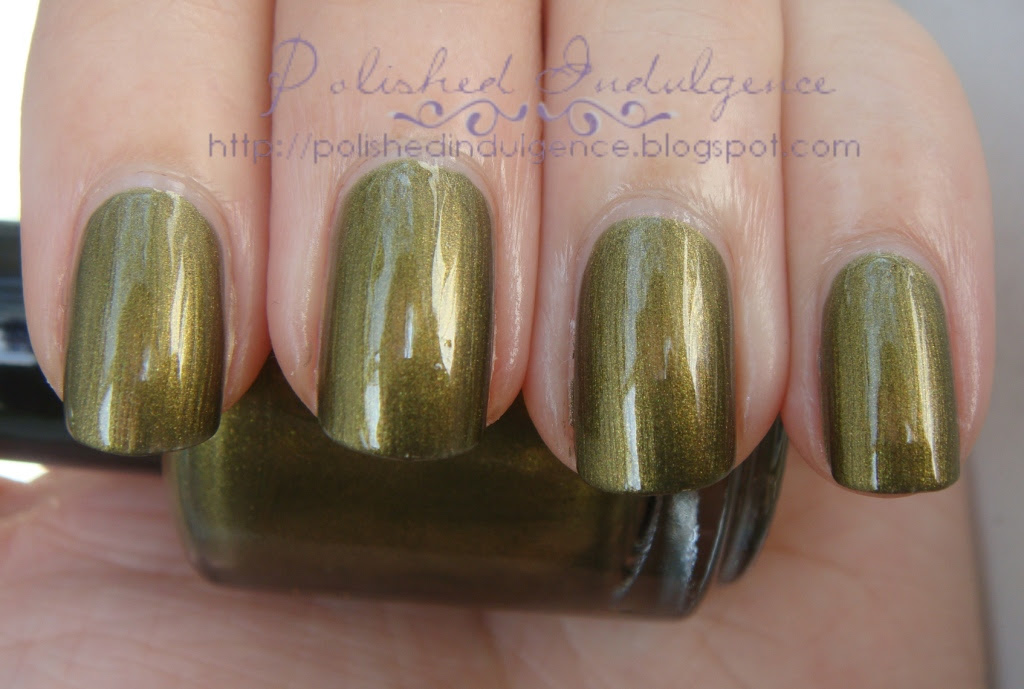 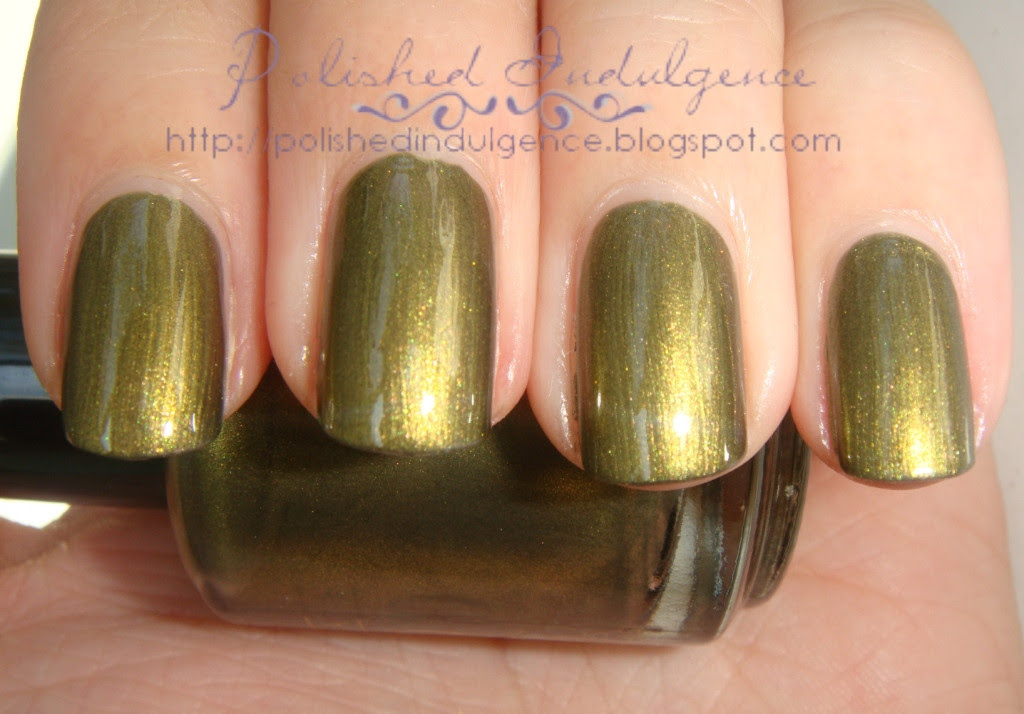 Natural light/Top coat/Flash
Hammie says: It reminds me of metal even if it's not a metallic finish. 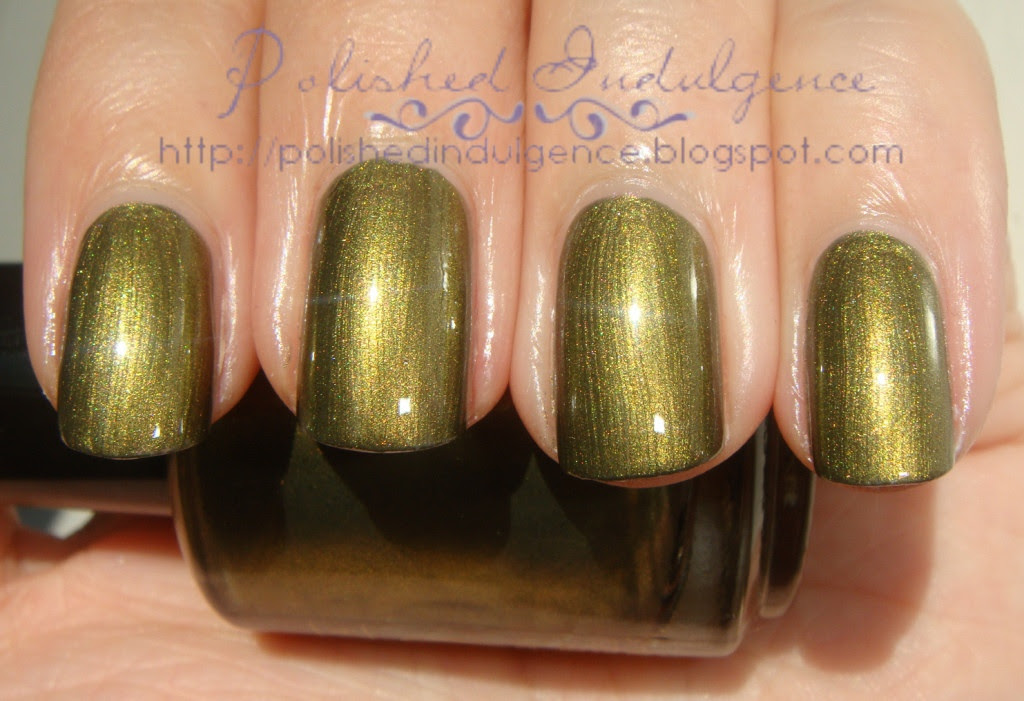 Sunlight/Top coat/No Flash
Hammie says: Purrr-ty!
With top coat, whatever brush strokes that might have been left behind when it dried are smoothened out, giving you this lovely finish that just shines. It better emphasizes the gradation from the greenish gold flash that you see when you look at it head on to the darker grayish green at the edges of the nail.

There's a complexity to this color that really appeals to me. Dupe or no dupe, I think this can very well stand on its own. I have seen though, that a CQ polish called Golden Green is about 90% the same as Mossy Britches. For us Canadians, that might not really be a game changer as the CQ/Scherer brand isn't something we have ready access to. I've seen comparison swatches of both and unless you carry around a magnifying lens with you, you wouldn't know the difference. Now, value for price is amazing with Mossy Britches. It was on sale when I got my bottle so I only paid $2.99 for 15mL of polish. Imagine, for the price of one Chanel Peridot I could've gotten eight bottles of Mossy Britches. Just for purposes of price comparison, you see. Given all that, it's quite surprising that not more people like the Nina Ultra Pro line. It could be that Mossy Britches is the exception and not the rule. I must find out more.

So did it do what I hoped it would? Yes. But allow me to clarify: I still want Wallis (not so much Peridot anymore as I've resolved to live vicariously through everyone else who keep it under lock and key) although it does satisfy the craving for greenish gold. I like it so much that I've been wearing it on my toes for a couple weeks now.

Hammie doesn't understand my current strange fixation with green/golds. He says it's normally not my color of choice as I tend to gravitate towards my blues or neutrals. We both do agree that it's a very pretty color that has a depth to it that others lack. The darkened edges really make it stand out. The price is another plus point. Despite that, Hammie isn't quite convinced it deserves full marks. His score?

9 Hammie Points!
Would you settle for second best if THE best is out of reach? What color this season have you been gravitating towards that you normally wouldn't? Do you agree that Nina Ultra Pro polishes deserve more love?
Posted by Carmela at 8:00 a.m.