I'll be honest. I'm not a big fan of black nail polish. Sure, it's edgy and classic, like the LBD (that's "little black dress" if you've lived under a rock all this time) but it's just so...dark. I do like vampy colors that are dark, like navy or blood red, just not full on black. Call me biased but it could very well have been because my mom used to always say black nails reminded her of dead nails. Not a very flattering thought, really. Unless you're a zombie.

When I picked up Carbonite, I ended up getting one other polish that caught my eye. I think I might have found the one black polish that'll make me change my mind. 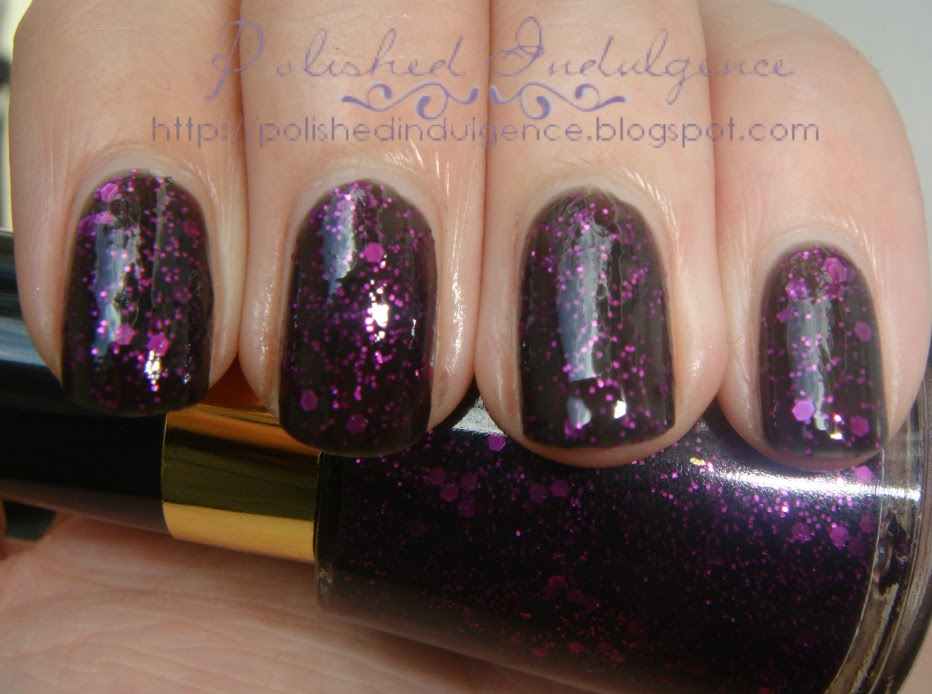 The Quick Take
Brand/Name: Revlon Facets of Fuschia
Color: Black base with fuschia/magenta mini glitter and larger hexagonal glitter
Formula: Blackened jelly base with fuschia/magenta mini glitter and hexagonal glitter
Finish: Jelly with glitter
Price: $4.99 CDN for 14.7mL
Seen at: Rexall
Note(s): Came with the Expressionists Collection that is a Revlon collaboration with cosmetic maven Gucci Westman; Not a limited edition release.
The Fun Facts 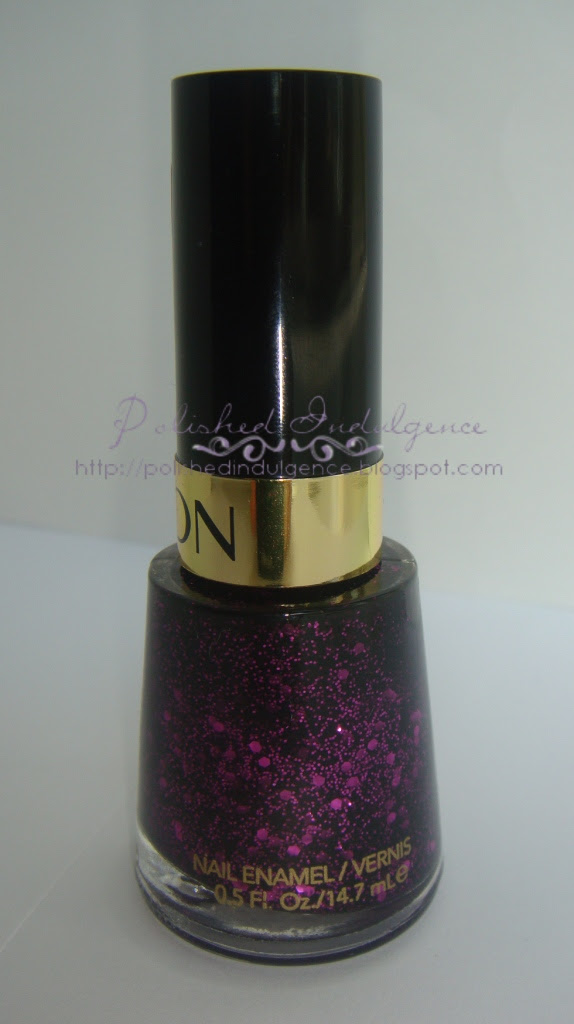 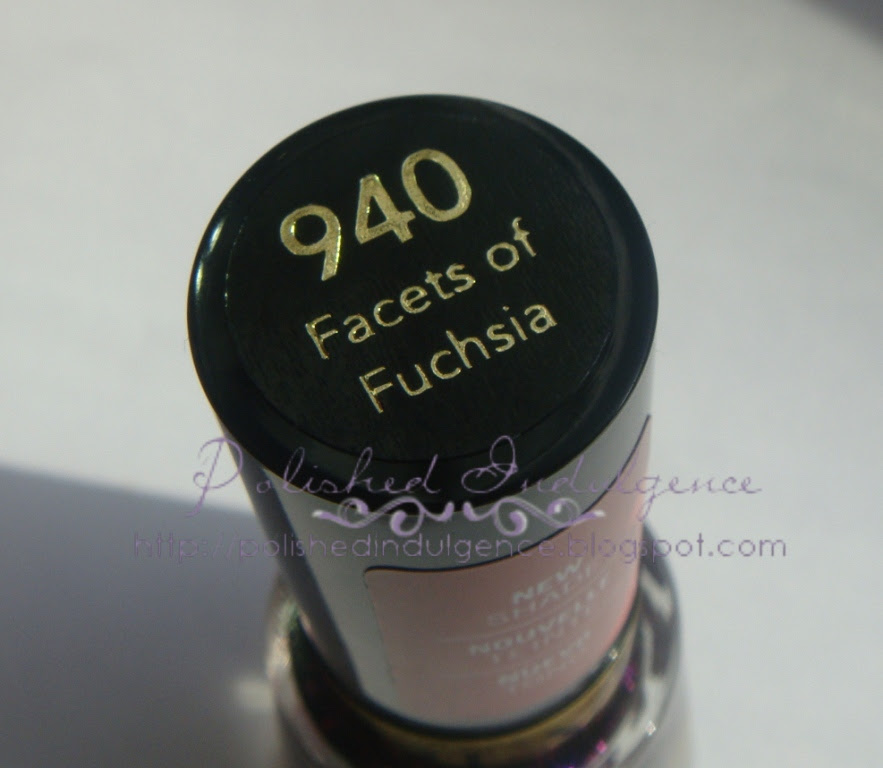 Number = NOT a limited release. 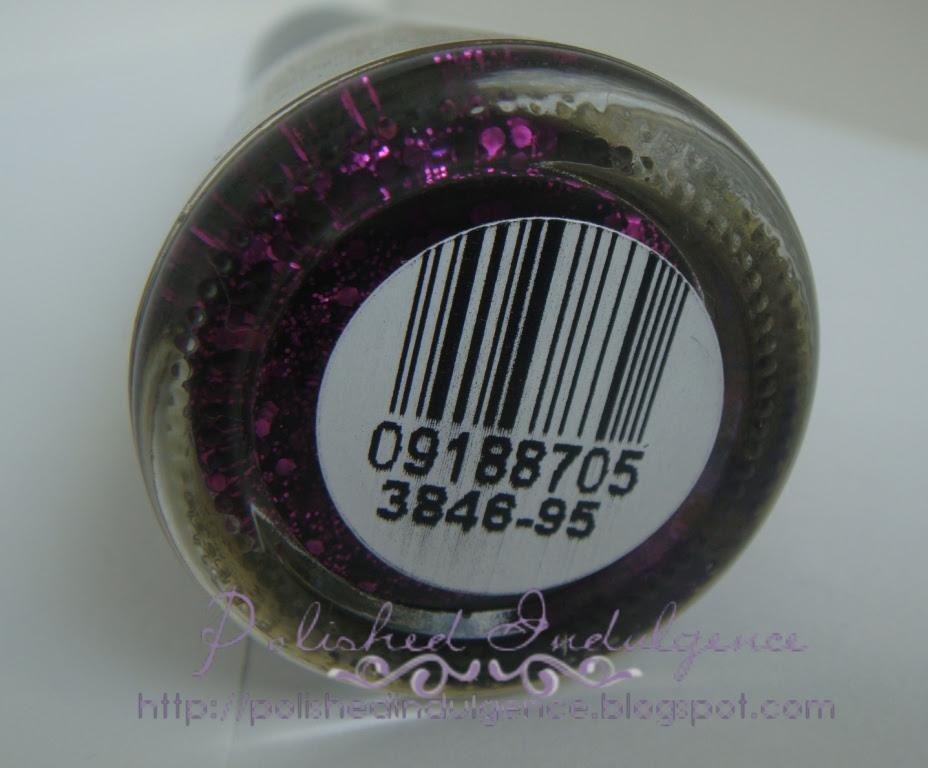 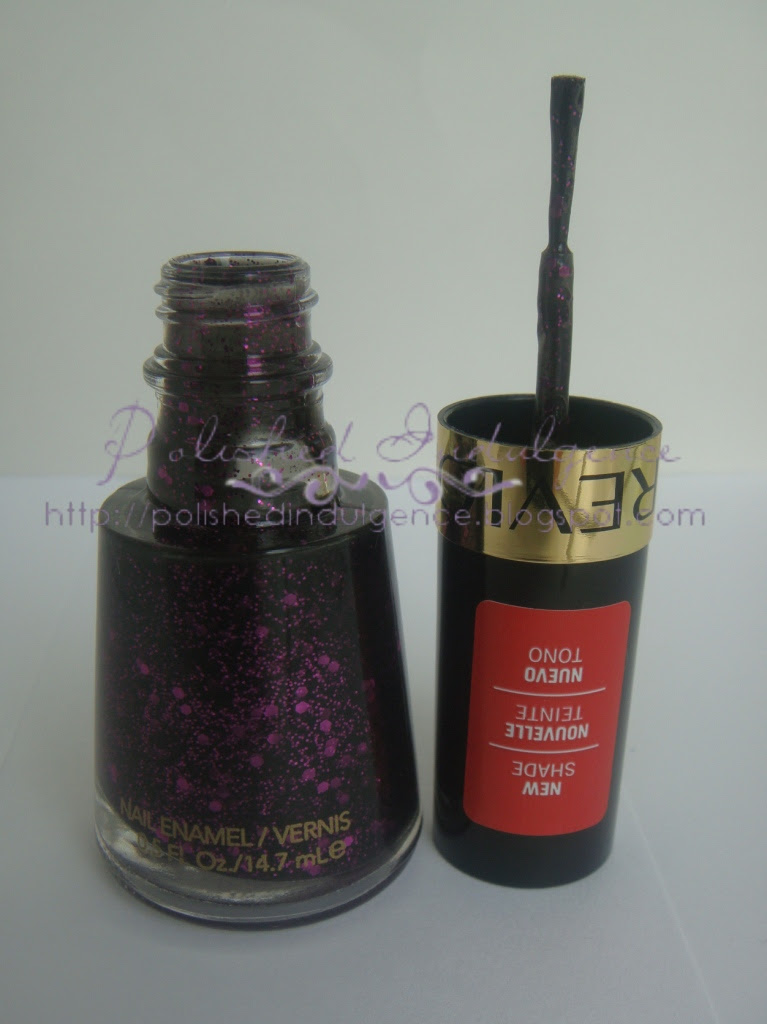 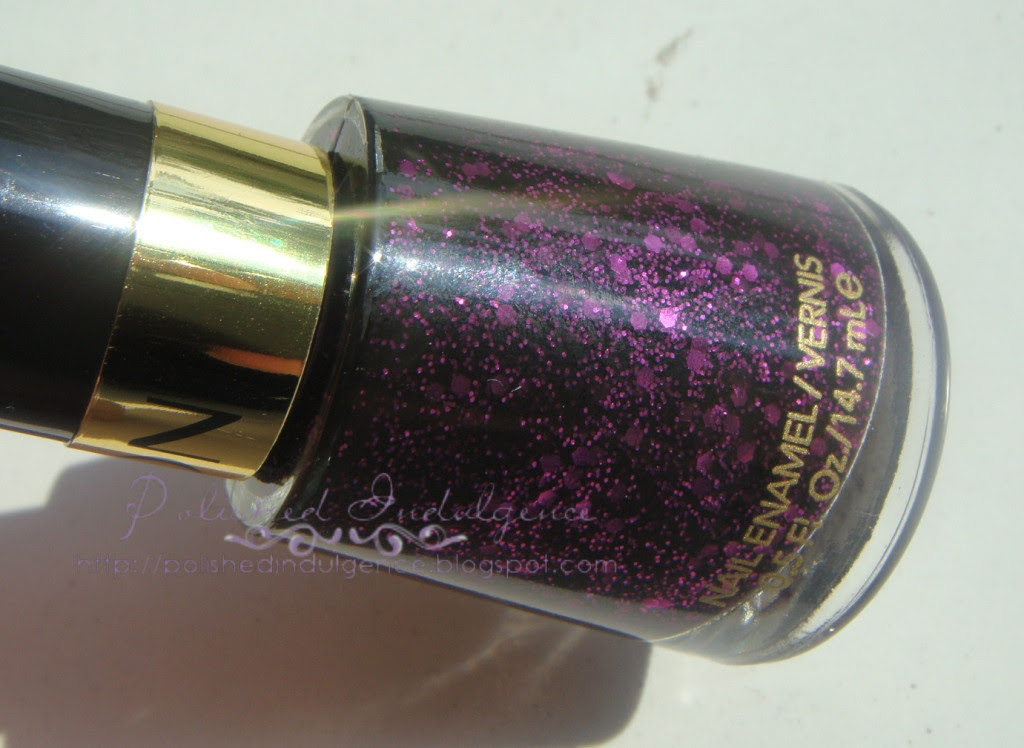 This makes the glitter fan in me very happy, indeed.


The jelly formula makes the black a little less intense than a full on plain black polish, which is something I really like about it. Since it's a jelly, the base color is quite sheer so you really have to lay it on to get it completely opaque. I normally would do 3 thin coats but since it has glitter, I thought best to do 2 thick coats instead. It worked wonderfully and kept the glitters from moving too much once I got it on the nail. The con behind a blackened base though is that it tends to cloud over the glitter so it doesn't quite shine as much as you'd expect. The magenta color does shine through despite that so you still get the awesome contrast of fuschia over black, without as much sparkle. The jelly base dried with high shine but the glitters meant a bumpy finish. You definitely need to lay on the top coat to get this one smoothed out.
***All nail swatches were done with Nail Tek II Foundation Base Coat and two coats of Revlon Facets of Fuschia unless stated. 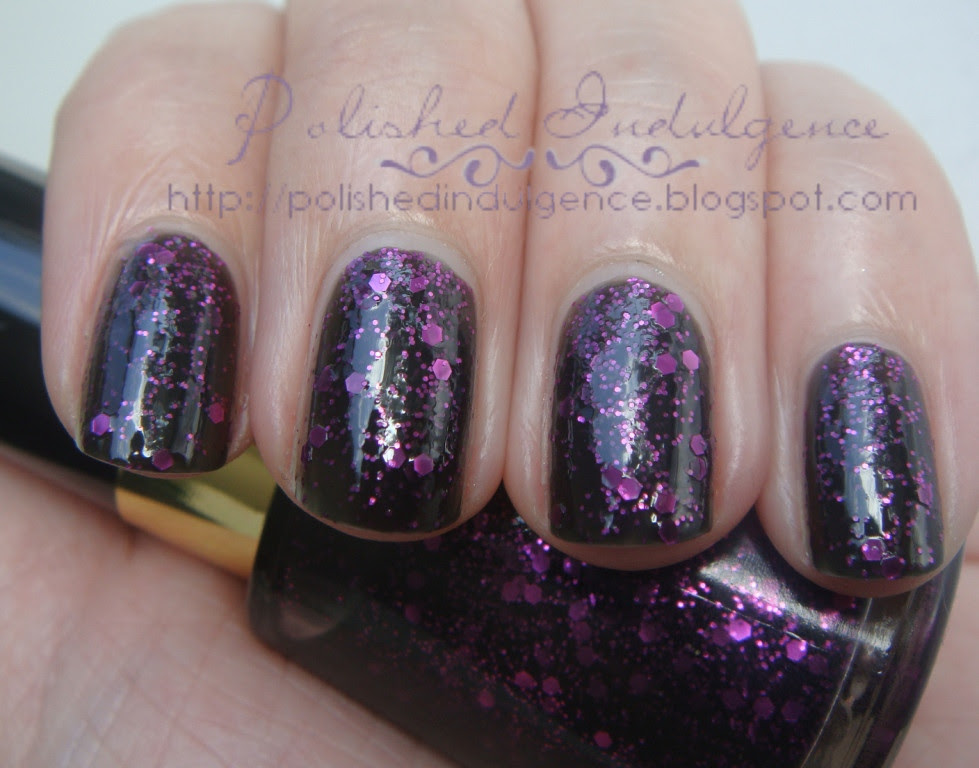 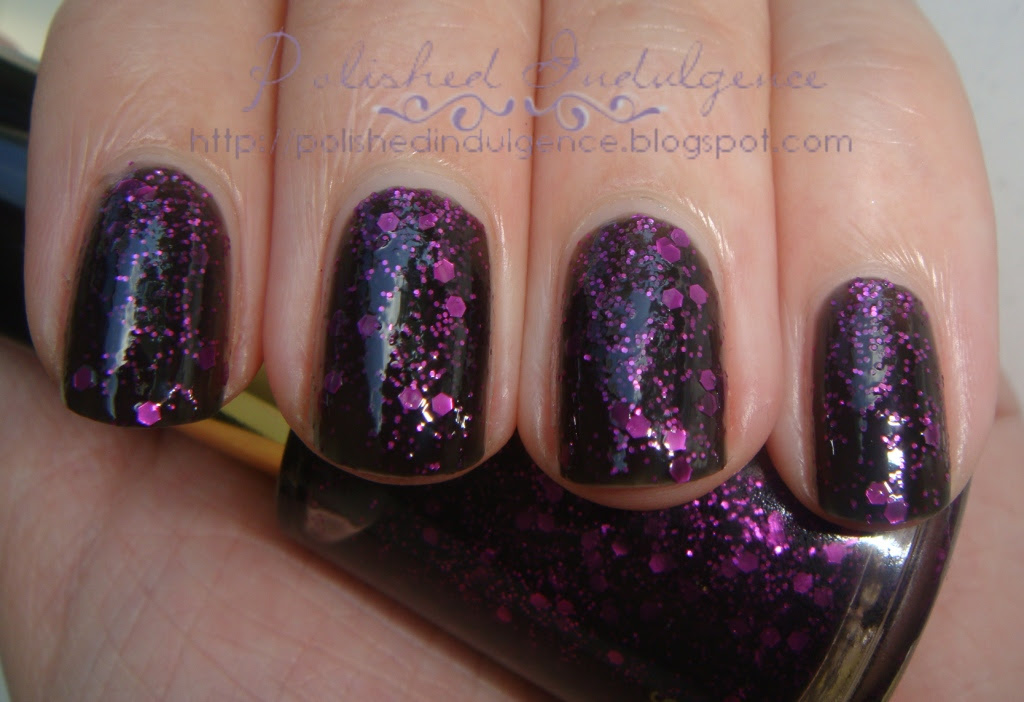 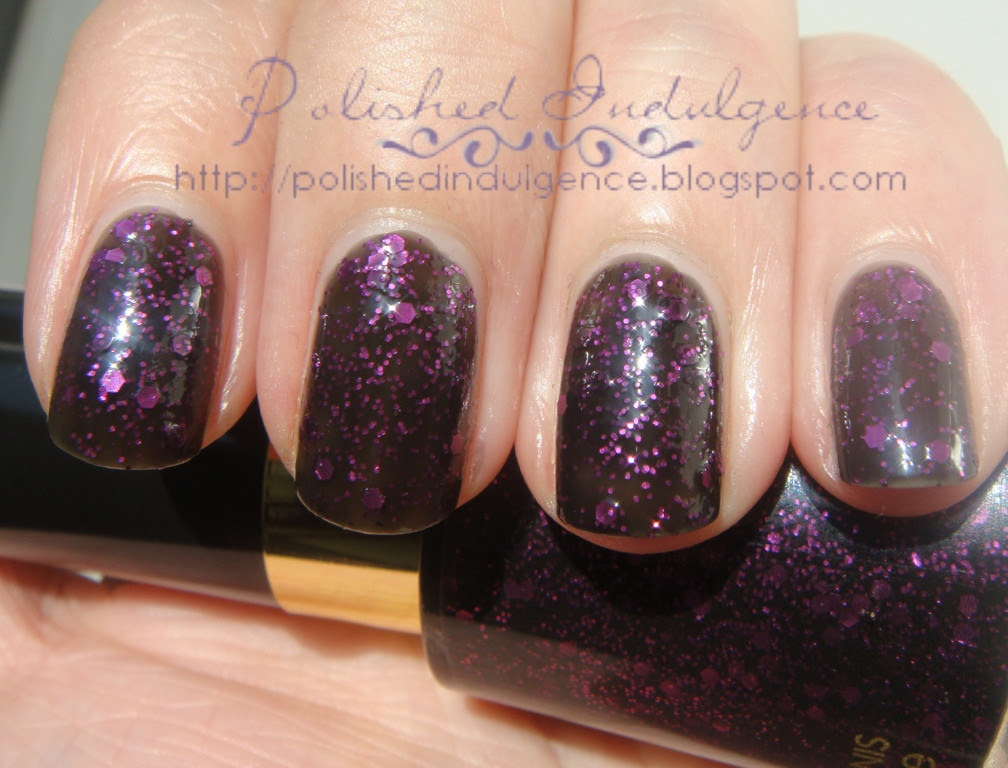 Sunlight/No top coat/No flash
The only let down: not very glittery.


I'm generally not a fan of the Revlon brush. I find it's a little too much on the thin side so it means more strokes to get the full nail painted. That's not necessarily a bad thing since it means precision and getting into the corners easily, but when dealing with glitters, the less strokes, the better. When you paint over the same area more than once, it tends to move the glitter around and if you do it wrong, you can very well end up with bald spots. This is also the reason why you need to be patient and wait a bit before applying your next coats. Consistency wasn't an issue for me. The jelly finish was easy to work with, even with the brush. You might have to push around the bigger hexagonal glitters if you want a more even looking application though.

Dry time took a bit longer with this one because of how thick I had to paint the coats. It was maybe 15-20 minutes before it was dry to the touch. As is the case with any glitter polish, it's a pain in the behind to take off. The jelly base comes off easy enough but the glitters tend to hang on like crazy. I used the foil method where you place a cotton pad soaked in polish remover over the nail and wrap it with foil to keep it in place. I left it in for a good 5 minutes (any more had me cringing at the possible state of my poor cuticles) and used a bit of elbow grease to completely get everything out. Ah, the price we pay for sparkles. 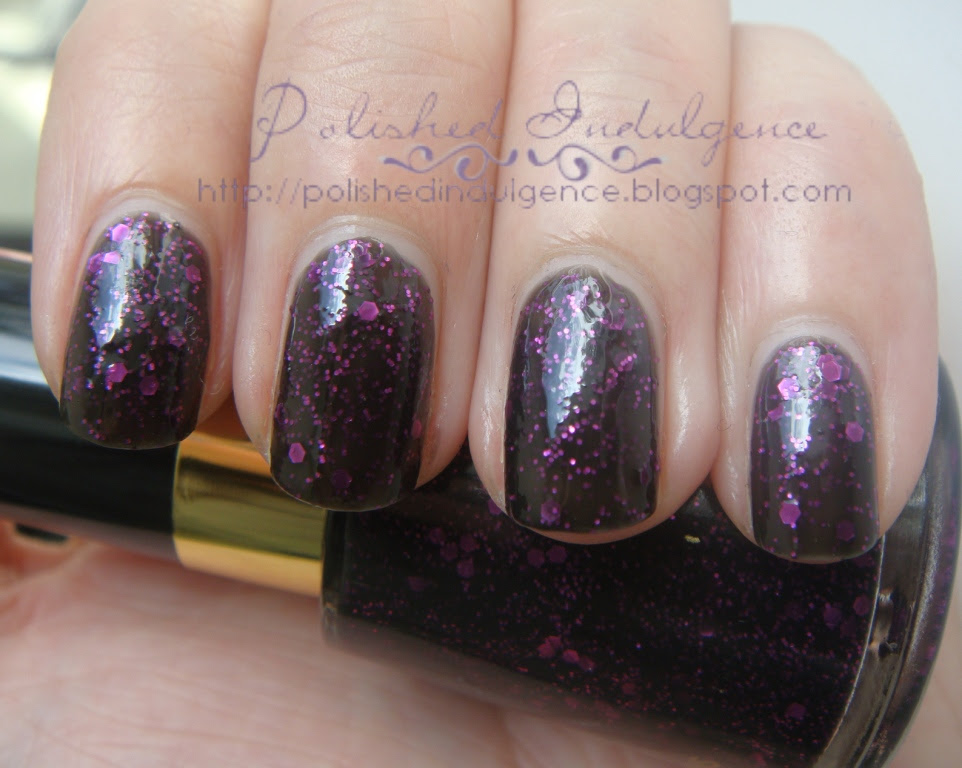 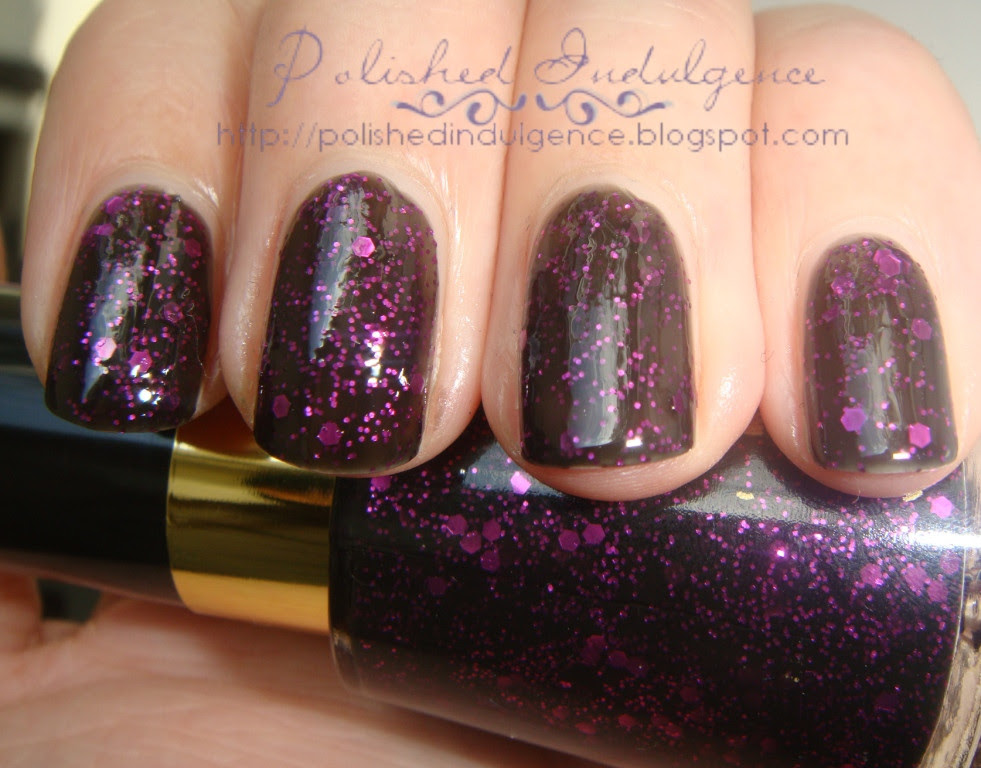 Natural light/Top coat/Flash
Hammie says: Those pinkish things look like Hammie treats. Can I try one? (Hammie, no!) 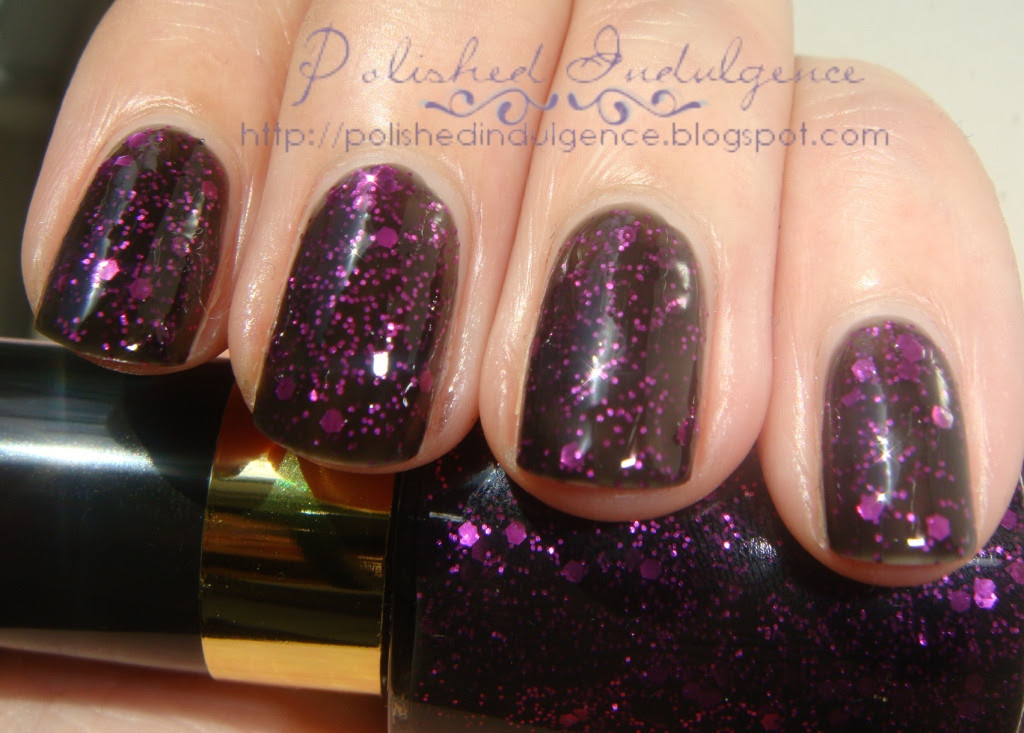 
Shine-wise, top coat doesn't really add much to it because the jelly base takes care of that. It does make the glitters flash more and smooths out the finish.

The Lowdown
It's been said that Facets of Fuschia is a dead on dupe for Deborah Lippmann Bad Romance. Both are black jelly-based polish with magenta glitter and hexagonal glitter. I don't own Bad Romance, but from comparison photos, it does seem to me that they are very, very similar. Facets of Fuschia seems to have more glitter while Bad Romance has a darker base. I can't say authoritatively that they are actual dupes, but they're so close that non-nail polish aficionados wouldn't be able to tell the difference. Does that make me happy? Very much so!

Deborah Lippmann polishes retail for $18 CDN at Holt Refrew for a 15mL bottle while Revlon polishes normally retail for $4.99 CDN for a 14.7mL bottle. (I actually bought mine for only $2.99 though because it was on sale.) While I've heard nothing but wonderful things about the Deborah Lippmann brand, I'd still prefer the affordable alternative since it's so very similar anyway.

Facets of Fuschia is not a limited release. At least not my knowledge. The number on the label proves that it is part of the core collection, although this might sell out quickly. I've never seen a similar take on a glitter polish in any other drugstore brand so this will definitely be eye catching to bargain hunting nailphiles. Look for it in the Expressionists Collection display or it might even be hiding among the core collection polishes.

This black jelly really made me do a 180 on my opinion of black polish. Even without the similarity to a higher end brand, this color stands out because it feels so rock chic. Edgy, yet girly. Like driving a pink Harley. Or rocking out on a glittery, blinged out purple Gibson. It says: I rebel against stereotypes but I'm not afraid to be soft when I need to be. Very, very cool.

A lot like her.
Hammie loves glitter as much as the next fairy but he really was so fixated on these hexagonal glitters! Treats they were most certainly not, but he still kept insisting. Ah, Hammie. He's got treats on his brain. Or a brain made of treats. A salivating Hammie scores Facets of Fuschia:

Are you a fan of black nail polish? Did you watch Jem and the Holograms when you were younger? Would you splurge for something similar if only to get the branded item?
Posted by Carmela at 8:00 a.m.