With Halloween fast approaching, I decided to finally jump on the bandwagon with some Halloween-themed nail art. While brainstorming, I remembered this faux copper patina tutorial on one of my favorite geek girl blogs, Epbot, that I've had bookmarked for the longest time. I haven't had the chance to try it out yet on an actual piece (I had seen a pretty seahorse at Winners but I got vetoed by Mr. J, boo), but I wondered if I could employ the same aging trick with acrylic paint on my nails. I already knew I wanted to do mummy nails using the slim line design since I first attempted it in one of my past twin posts with the always awesome Marta as I figured the texture would be perfect to mimic wrapped linen. It seemed like a good idea in my head so I knew I had to try it. And guess what? It came out even better than I could've ever hoped: 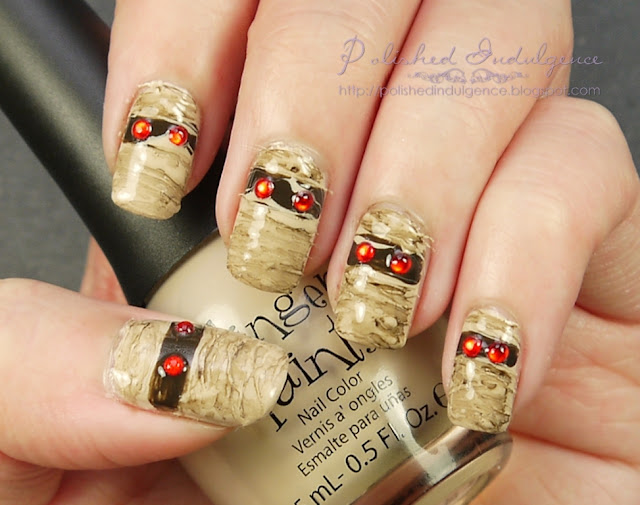 Step 1: After applying your favorite base coat, apply an opaque layer of an off-white or beige creme. I opted to not use white because we want it to have the look of aged linen. Let dry. 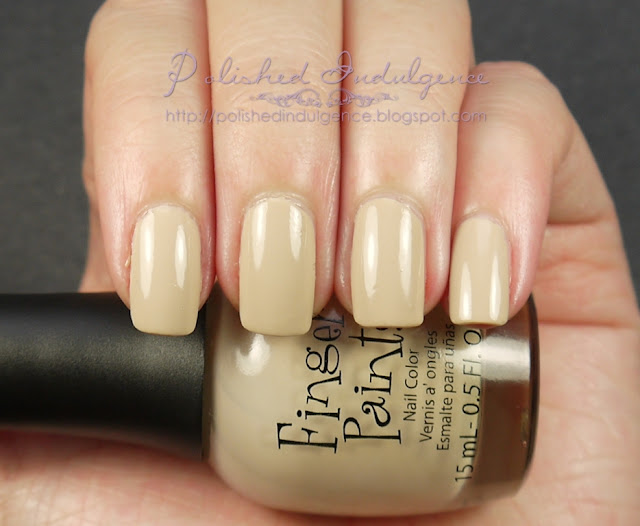 Step 2: Using a detail paintbrush, take some of the dark brown acrylic paint and paint on a horizontal rectangle on the upper half of the nail, as shown. Let dry. 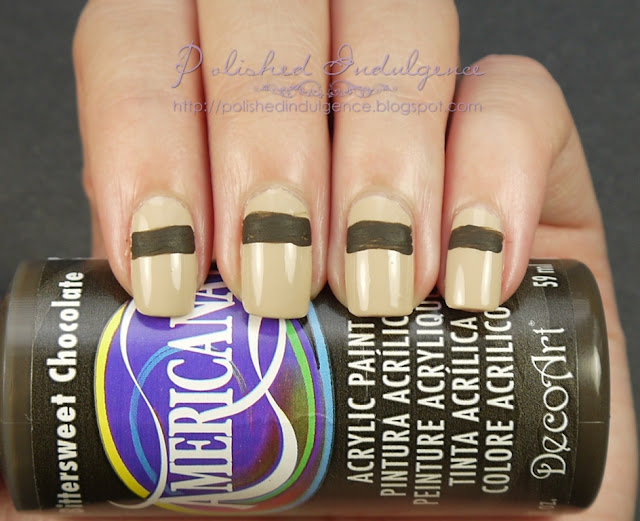 Step 3: Next, take some of the same off-white/beige creme you used for the base and employ the stringing technique as shown in this video. The basic idea is to have a bit of polish, wait for it to be tacky and stringy, then use a dotting tool to work it on to the nail. You have to be patient so as to get the best stringy results (the tackier the polish gets, the better to use for the stringy effect). Attempting to go about it too soon can result in blobs like on my ring finger. Be sure to do that as much as possible only on the off-white/beige area. Clean up around the cuticle and start dotting clear nail polish (or nail glue, depending on your preference) for the mummy's eyes. 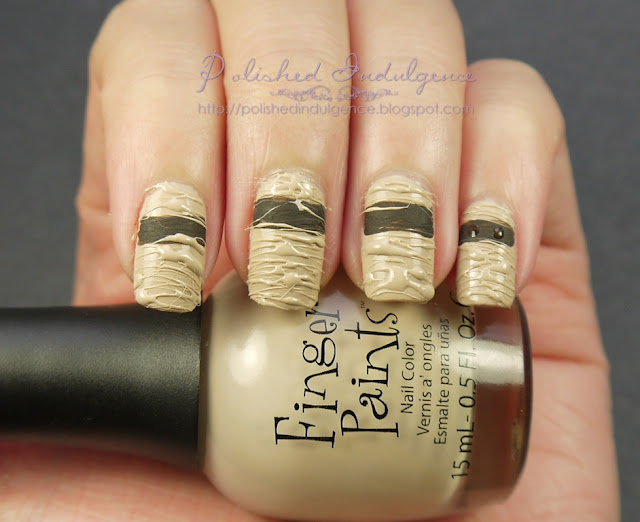 Step 4: Attach the red rhinestones on top of the dotted clear nail polish (or nail glue). Looking good, right? But we're not quite done yet! 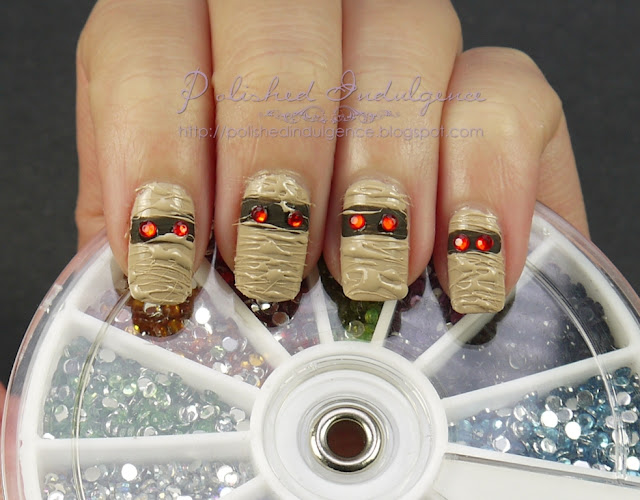 Step 5: Using the detail paintbrush from earlier, take a bit of the dark brown paint and smear it on top of the off-white/beige area. No precision is needed, as far as placement goes, just so long as you don't put too much. Before the paint dries, clean your paintbrush in some water and use that to water down the brown paint. You'll notice that the pigment will stick mostly to the recessed areas, making the raised areas lighter and stand out more. This also gives it a nicely weathered look. Now, if you put too much paint, take a cotton swab and dab a bit to take away the excess pigment. 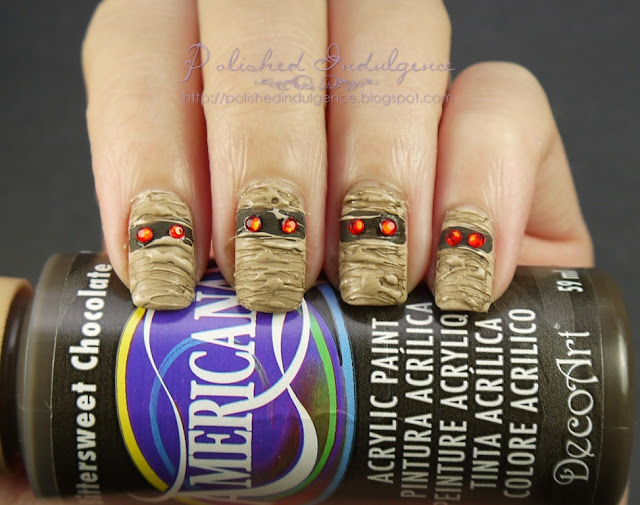 Step 6: You can stop at step 5, but I would suggest adding top coat as a protective layer to seal everything in. On hindsight, I probably could've added a matte top coat on top of the protective layer of top coat for a more true-to-texture sort of look. 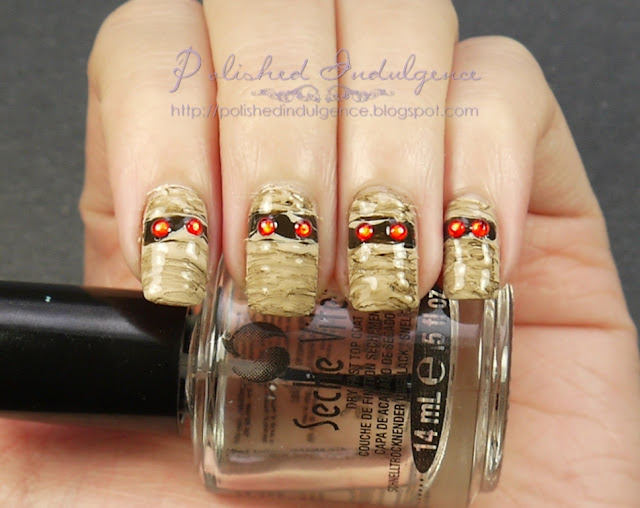 Fairly easy to do, right? Now, if you scroll back up to step 5, I'm sure you'll notice that my pinky and ring finger look more "aged" than the middle and index. I was dabbling with using a cotton swab to control the amount of pigment deposited in the recesses and I may have taken away a bit more pigment than I wanted. So from experience, I'd say reserve that method for taking away too much pigment instead of using it to control how much pigment you want. It also helps to smear the brown paint in the recesses then using a bit of water to brush off the excess with the paintbrush. 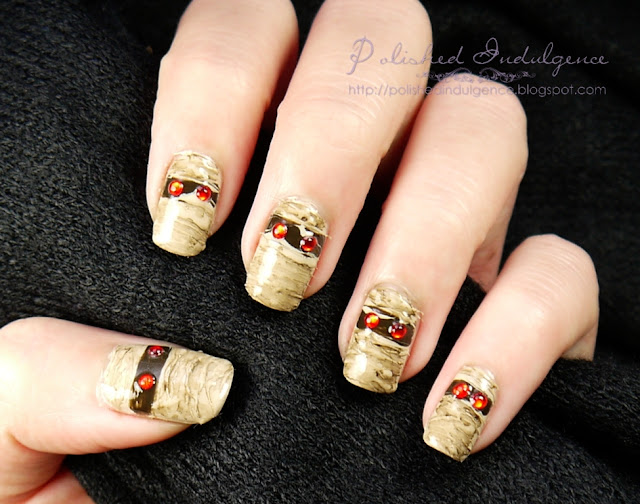 Here's a look at the whole hand. 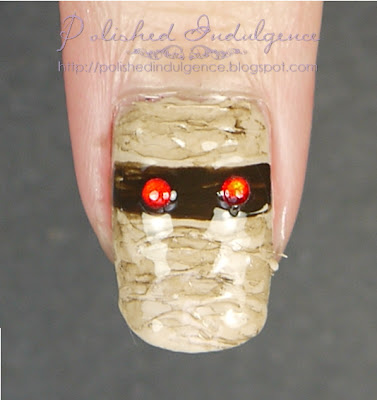 Inset of the thumb.
(The stringy bits sticking out on the right is due to bad clean up, but they actually look like linen wraps sticking out so it's a happy happenstance.) 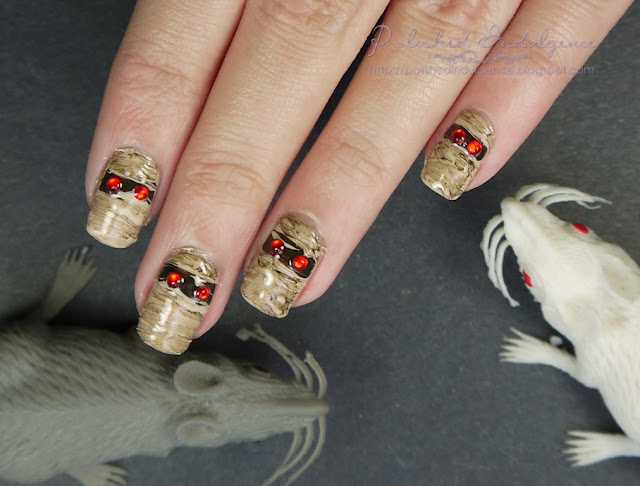 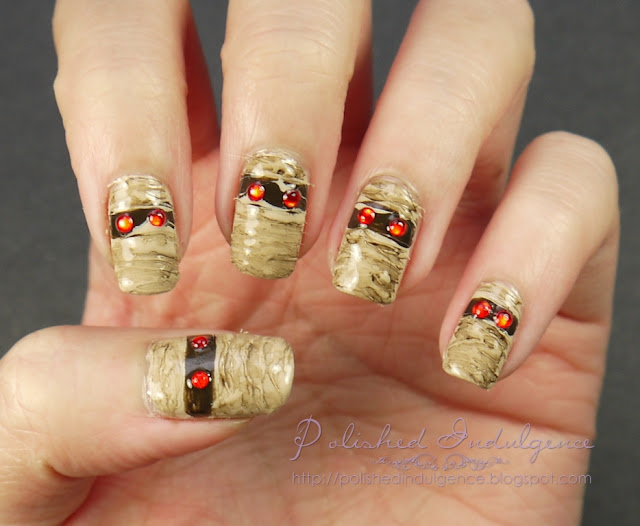 Surprisingly, the ring finger came out pretty well too, blobs and all. 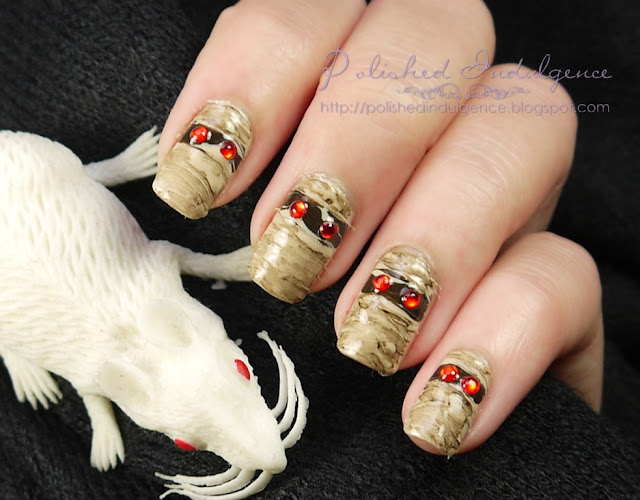 Hammie doesn't approve of these other rodents taking away his thunder.

I really enjoyed doing this design. The hardest part, to be quite honest, was waiting for the polish to be tacky enough to use. Otherwise, everything else was a cinch! Playing around with acrylic paint also made me appreciate just how much easier it is, as a medium, to paint with (especially for freehand designs) than to work with actual nail polish. Might I just add that even Hammie and Mr. J approved of my mummy nails? Have you sported any Halloween themed nails yet? Who will you be dressing up as? Will you be giving out candy this year?
Posted by Carmela at 7:00 a.m.