There's no point denying the inevitable. The leaves are changing and the temperatures are dropping. While fall isn't official for a few more days, I've resigned myself to the fact that my neons and brights just aren't as appealing as they were in the hotter months. For the next little while, they'll be relegated to the back of the drawer (much like the flimsy tops and summer dresses) while the vampy, darker shades get their share of the limelight (along with the cardigans, sweater dresses and wool coats). Embracing change, here's a look at one of the first fall collections that trickled in as early as July (!).

When word of the China Glaze On Safari collection got out, I knew the blue one had to be mine. Promo photos portrayed it as a gorgeous medium blue creme that I've been looking for. Thankfully, I've got some of the most awesome nail polish buddies ever and with the help of Mary from Swatch and Learn, I managed to snag the Native 6-piece set for a steal (thanks again, Mary!). I also had my eye on what looked like a Chanel Paradoxal dupe (in hopes the formula would be better than the Revlon one) and the dusty teal one, so it made more sense to get the set. All the others made for a nice bonus. I've decided to bend the rules again, and do a review of two shades per post (just so we don't take forever to get through all six!), much like how I reviewed the Hunger Games-inspired Capitol Colors Collection from earlier this year. We'll jump start the series with a Monday blue and pretty plum: 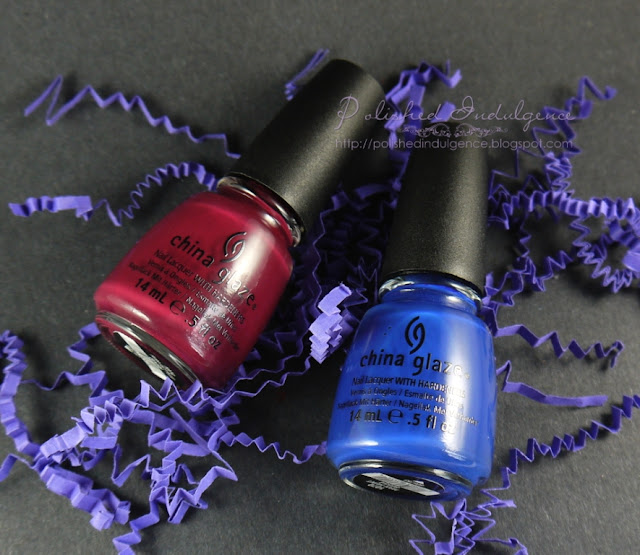 On the deck today: Purr-fect Plum and Man Hunt. 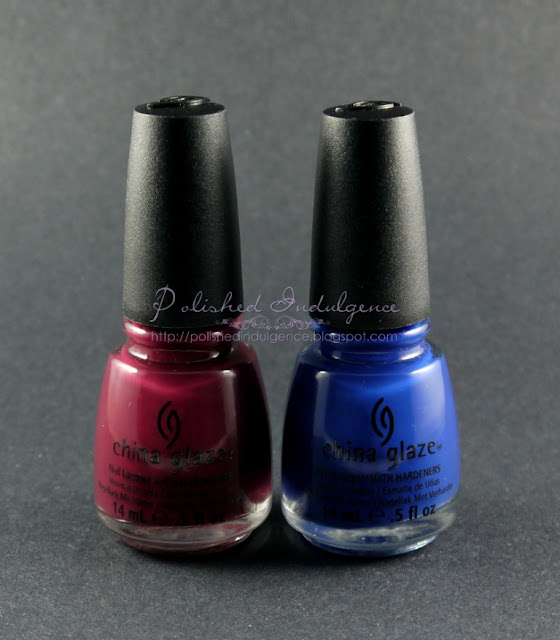 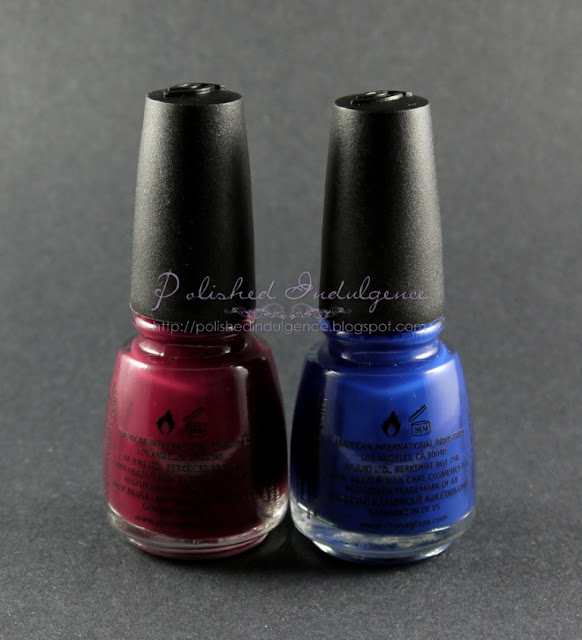 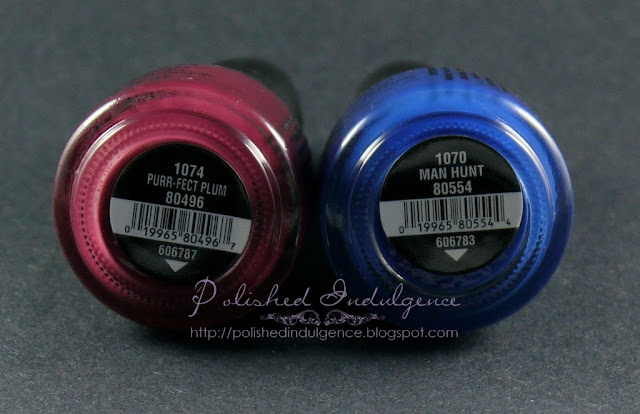 Labels at the bottom. 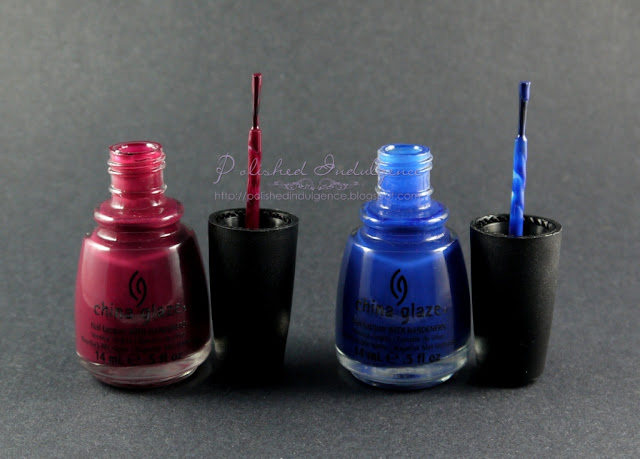 
Seen at: Sally Beauty, Nail Polish Canada, Trade Secrets and wherever China Glaze is sold.
Price: $7 CDN for 14mL
Note(s): Both are from the China Glaze On Safari Fall 2012 collection. Native is the 6-piece set of the darker, more colorful shades in the collection. Tourist is the 6-piece set that includes the two glitters and more neutral shades.
***All nail swatches were done with OPI Natural Nail Base Coat and two coats of China Glaze Purr-fect Plum and China Glaze Man Hunt unless stated. 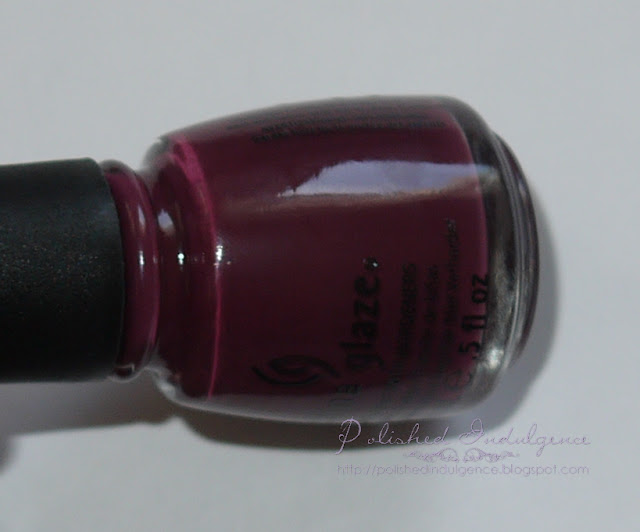 This is one pigmented deep plum! It reminds of black plum jelly. Yum! But apart from that, this one doesn't really seem to be the most unique of colors. It's pretty much a fall collection staple and we've probably seen various iterations of it in the past. Luckily, I don't happen to own a whole lot of these sort of shades so I'm glad to add this to my collection. A thing to note: what you see in the bottle is actually a teeny tiny bit lighter as this one dries darker on the nails. 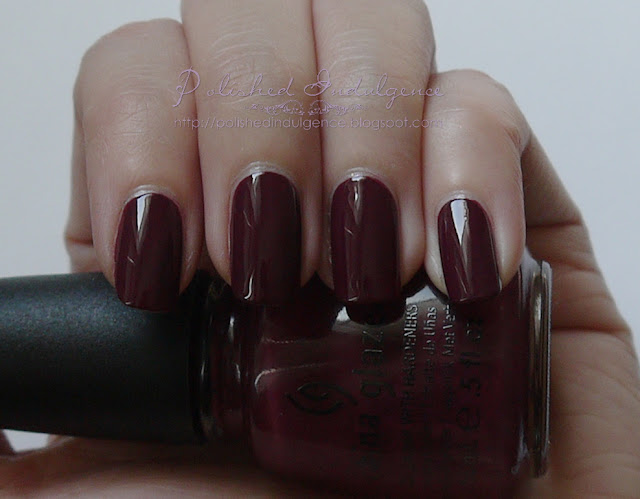 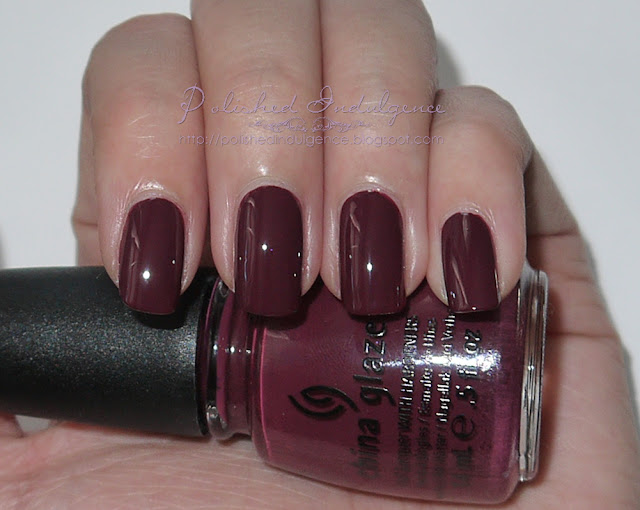 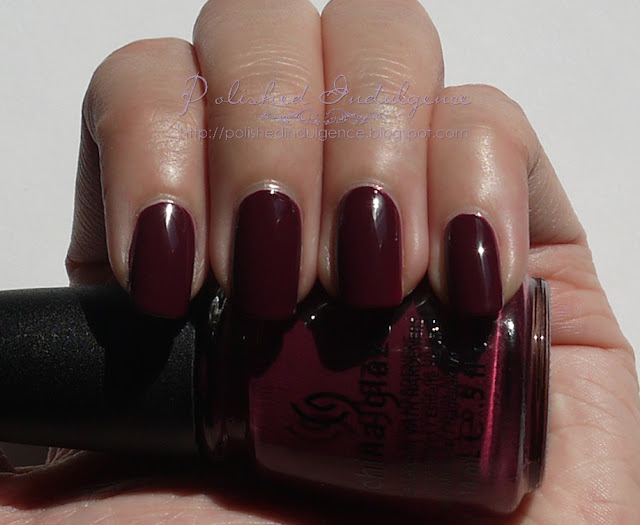 The formula on Purr-fect Plum was a bit more watery than I would have liked. But that really didn't present much of an issue when it came to application. Truth be told, having it less viscous allowed for an easier application, with the polish flowing nicely with your standard China Glaze brush. You do have to be careful not to have too much polish on the brush as that may lead to cuticle flooding. I usually work with thin to medium coats so it wasn't that big of a deal for me. The best part of the formula, I would say, is how it's so unbelievably pigmented. This one was practically a one coater! That's a huge win for me, despite the run of the mill berry color. I did two anyway, more out of habit than necessity. Dry time is average. Oh, and beware the cuticle staining upon removal! Although it's nothing that some hand washing won't fix. 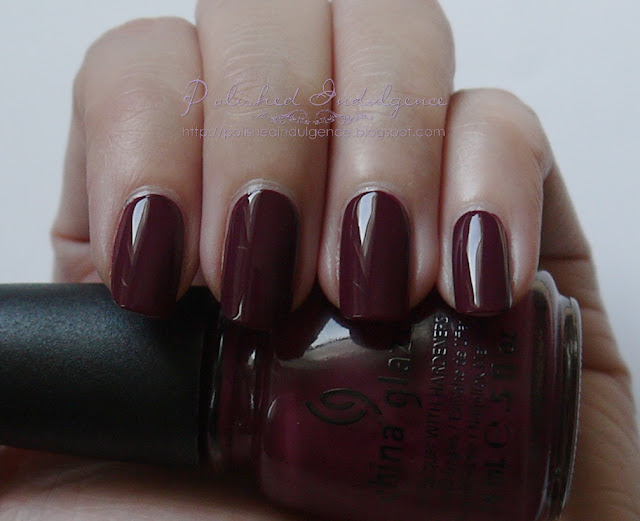 Natural light/Top coat/No flash
Not much of a change with the addition of top coat, huh? 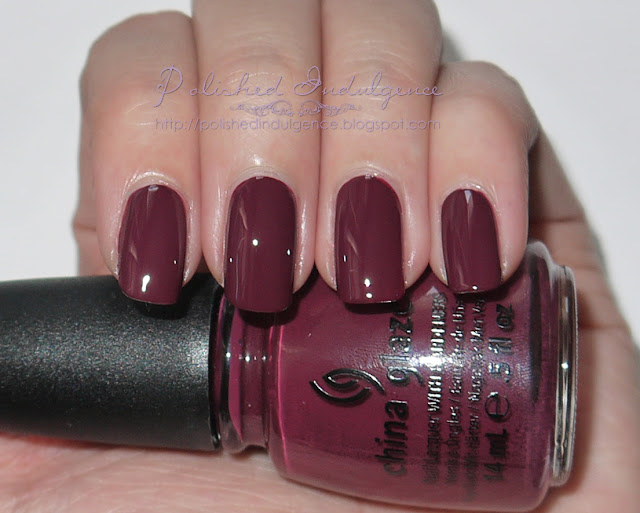 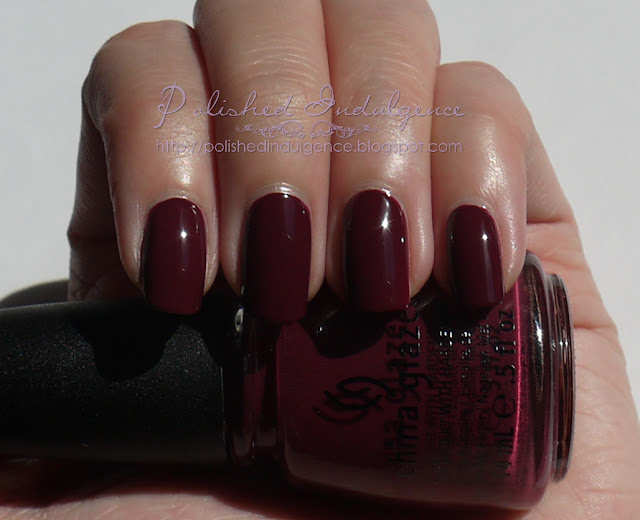 Sunlight/Top coat/No Flash
Hammie says: Although, I am pretty impressed by that shine!

Hammie calls Purr-fect Plum a 'blah sort of color'. He says it's just another incarnation of the perennial berry shades that always make an appearance when the leaves start to fall. Nor is he impressed by the creme finish. He says some sort of bling might have put this in his better books. Typical magpie hamster syndrome. While I agree that it's nothing particularly revolutionary, I do love the formula on this one. The fact that it's pretty much a one-coater is major points for me. (I mean really, who wants to do 5 coats just to get full opacity?) The amazing innately high shine means you can just slap this on and head out the door (though I won't recommend wearing it without base coat for fear of staining)! Besides, I'm a sucker for creme finishes. You can't really go wrong with a classic. As for dupes, one of the closest I've seen is Zoya Toni (also a recent fall 2012 release) so you probably won't need both. Another dupe possibility courtesy of my stash is from the long discontinued Sally Hansen Salon line called American Beauty (also a fall release). The only difference is the slight shimmer in American Beauty, otherwise I'd call them 90% dupes. As for value for price and availability, this one shouldn't be too hard to track down. The price is also pretty reasonable for the quality and the highly pigmented formula that you get. Altogether, not a bad deal! 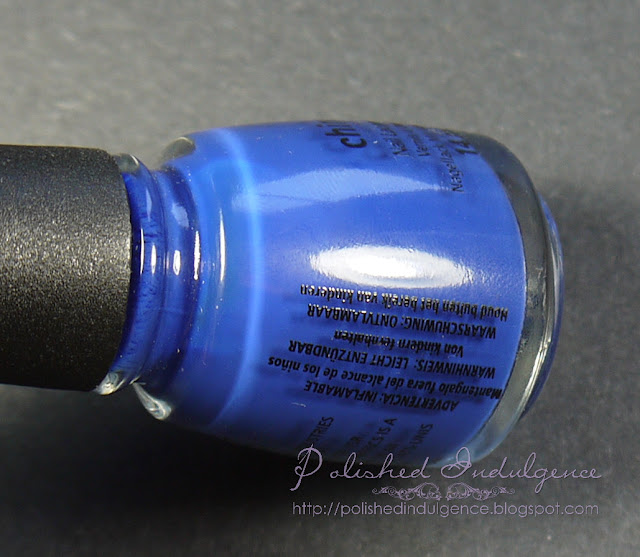 This is one gorgeous blue. I've been looking for something quite like this for a while now. It's a great medium blue that balances out the brightness with a dusty sort of quality to it. This is a richer blue than China Glaze Ride the Waves (the blue jelly from the Summer Neons 2012 collection). More opaque, too! 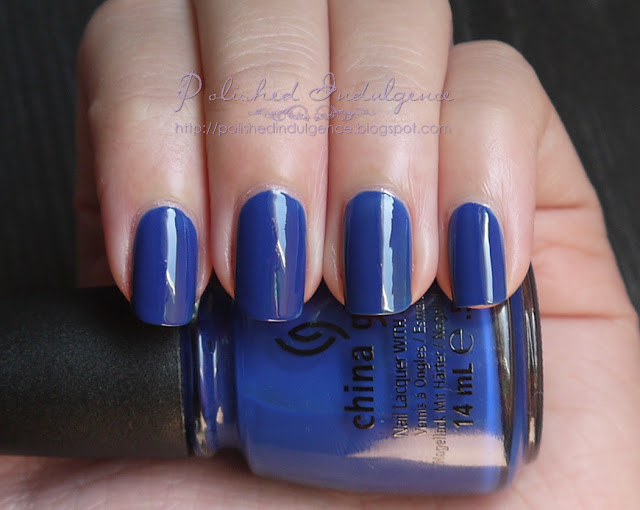 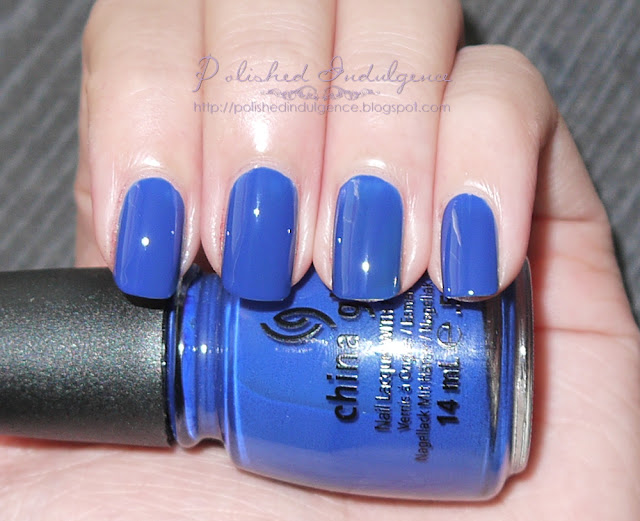 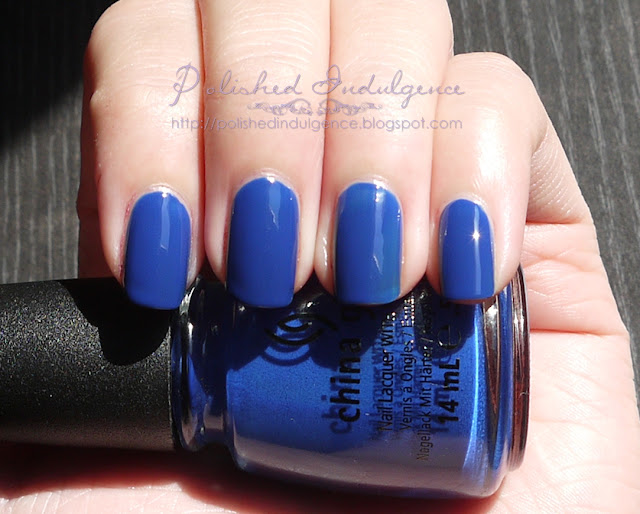 The standard China Glaze brush works wonderfully with Man Hunt's formula. Granted, it's also on the thinner side of the spectrum, but it still flows nicely, making application a breeze. It starts out looking streaky on the first coat, but builds up nicely after two. If you use thin coats, you'll probably have to do three, though. Thankfully, the lovely color more than makes up for this. Dry time is average and, as is typical with blues, watch out for smurf fingers upon removal! I'd double up on base coat too, just to be on the safe side. 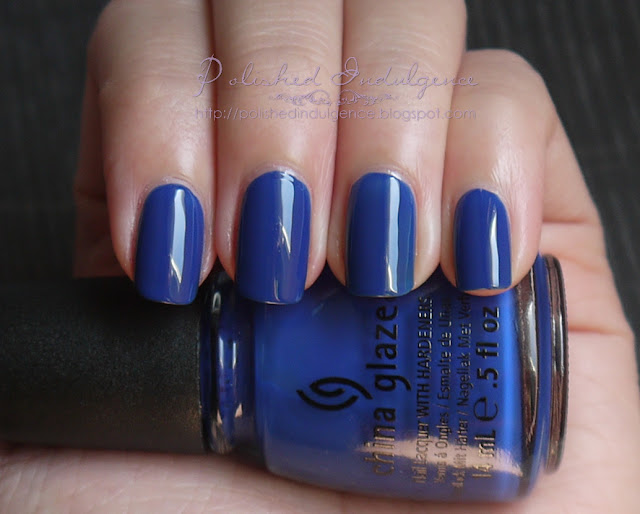 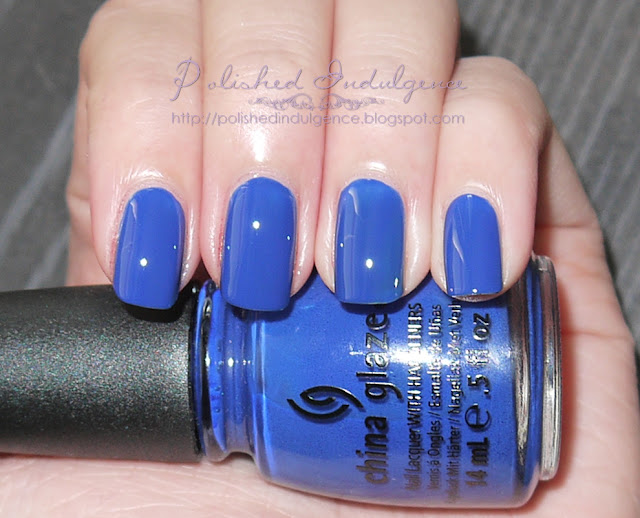 Natural light/Top coat/Flash
Hammie says: Okay, this is one creme I can get on board with! 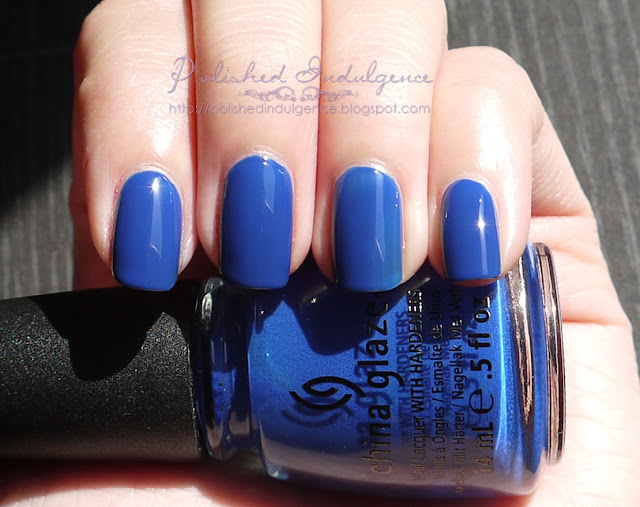 Owing to the innately high shine finish of Man Hunt, top coat really serves more for protection rather than added shine. As for possible dupes, the closest I've seen is OPI Dating a Royal, although Man Hunt looks just a shade more intense of a blue compared to it. This goes without saying: you probably don't need both. China Glaze First Mate also comes to mind, but it's a few shades darker. (So no, this one isn't a re-promote color.) I rummaged through my stash and the closest I've found is Essence Walk on Air, a jelly that has a very slight green tone to it that keeps it different from Man Hunt. All in all, this makes for a surprisingly unique blue. Win! The less than stellar formula puts a damper on things, however. On the upside, availability and value for price are both similar to that of Purr-fect Plum. This should be easy to track down both in stores and online, whichever shopping method you prefer. The price point is also fairly reasonable for the amount and quality of product that you get.

Here's to hoping your Monday blues aren't keeping you down! It's been a pretty decent start of the week for me (spotty internet and seasonal allergies, notwithstanding). I still have a few things to check off the huge to-do list that coincides when the seasons change. How are things looking on your end? Have you finally accepted that fall has sprung or were you eagerly awaiting it? How do you deal with the changing of seasons? Would you purchase a nail polish that's simply a variation of something you already have? And if you haven't already, do please take the time to enter for a chance to win a bunch of goodies from our first Blog Birthday Giveaway!
Posted by Carmela at 7:00 a.m.