If you still haven't heard by now of the huge orange trend that's taking the beauty world by storm for the spring/summer season, I'd have to wonder why. It already figured big last year and it's still going strong this year, especially after Pantone called Tangerine Tango the 2012 Color of the Year. Heck, even Sephora jumped on the bandwagon, teaming up with Pantone to create the new line Sephora + Pantone Universe with color coordinating makeup that features - you guessed it - Tangerine Tango. It seems rather timely then, to reach for a pretty coral nail polish that's featured in today's twin post with the lovely Marta of Chit Chat Nails. Sure, it's not exactly tangerine, but: 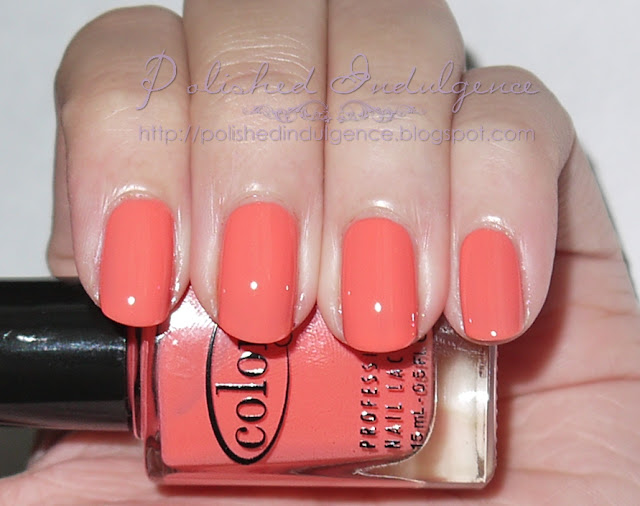 There's enough orange in this coral to be trendy!

Brand/Name: Color Club Coral Cascade
Color: Coral
Finish: Creme/Jelly
Price: $3-8 CDN for 15mL
Seen at: Nail Polish Canada, Trade Secrets, Winners (as part of an unnamed set; seasonal availability) and wherever Color Club is sold.
Note(s): I'm not entirely sure which collection this is from as even the Color Club website doesn't list its collection information. I'm guessing this has been around for a while now as part of the permanent line. 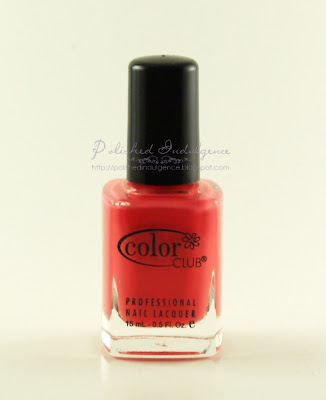 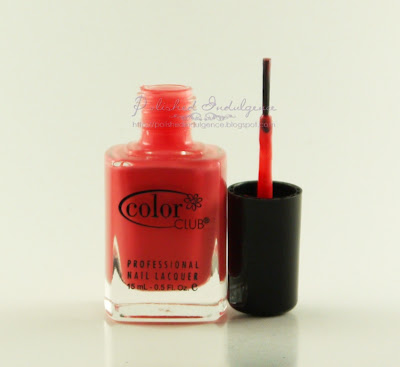 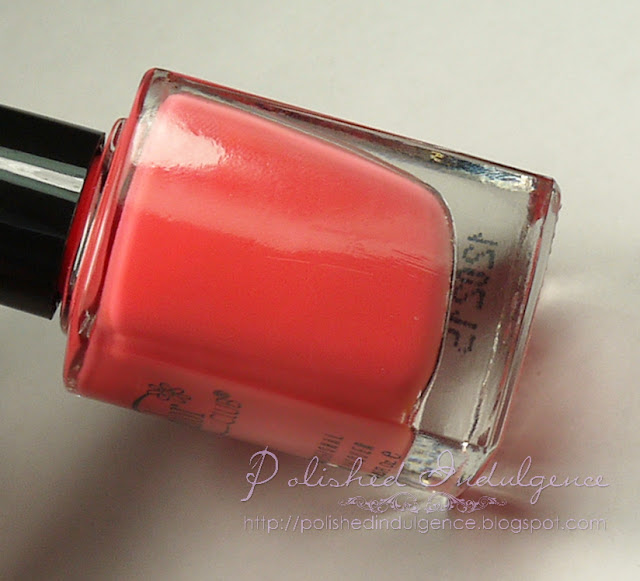 Milky coral goodness!
Coral Cascade is not your typical "right up your grill" sort of coral. While it still packs a punch with color saturation, it does have a milky, muted quality to it that contributes to that jelly-like quality it possesses. It's not the most pigmented polish though as I probably could've used an extra coat. I felt I could still see a shadow of my nail line but maybe that's just me being finicky. At any rate, the finish was super shiny on it's own as you'll see the photos below.
***All nail swatches were done with Orly Bonder Base Coat and two coats of  Color Club Coral Cascade unless stated. 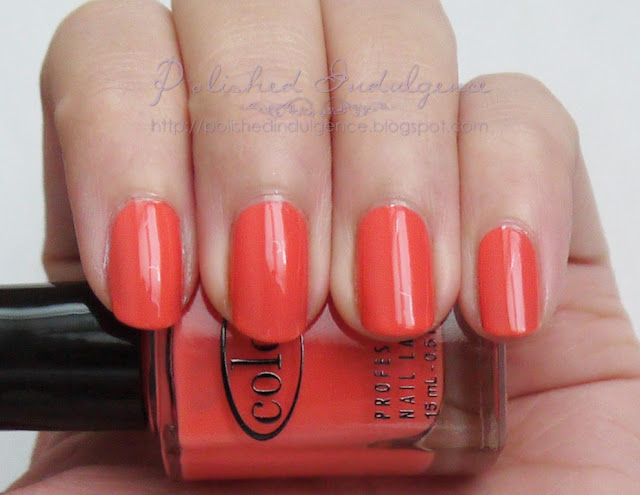 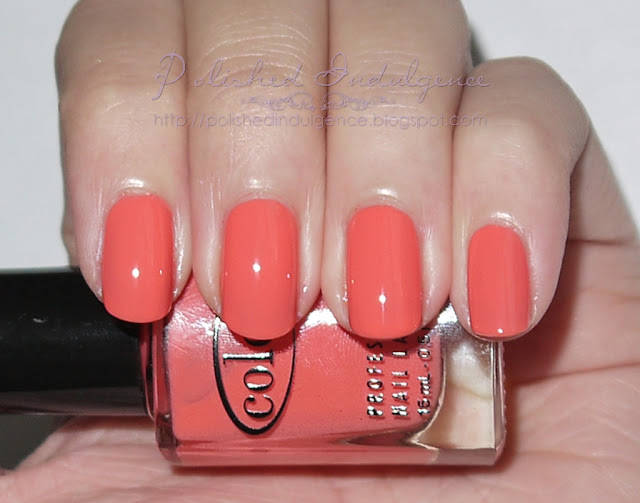 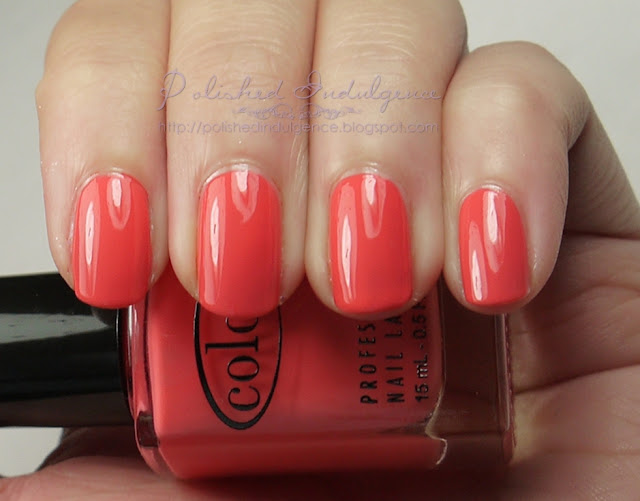 Sunlight/No top coat/No flash
Is it just my imagination or do I still see a ghost of a nail line (like on my pinky)?
Along with that jelly-like squishiness is the streaky, sheer mess of the first coat of polish. Fear not as it does level out nicely and covers up more opaque at two. I still think I could've used another extra coat but two seems to be the sweet spot. I had no problems with application and the somewhat thicker formula flowed nicely. I'm sure I've mentioned it in the past, but I do appreciate the thin Color Club brushes compared to the pretty much omnipresent wide brushes of other brands. I like how it allows for easier application in tight spaces and being able to get to the cuticle without actually touching it. Since it fans out nicely, you still get the benefit of a wide brush. Dry time was pretty fast, as observed with the other polishes in the set that Coral Cascade came with, at about a couple minutes before it was dry to the touch. 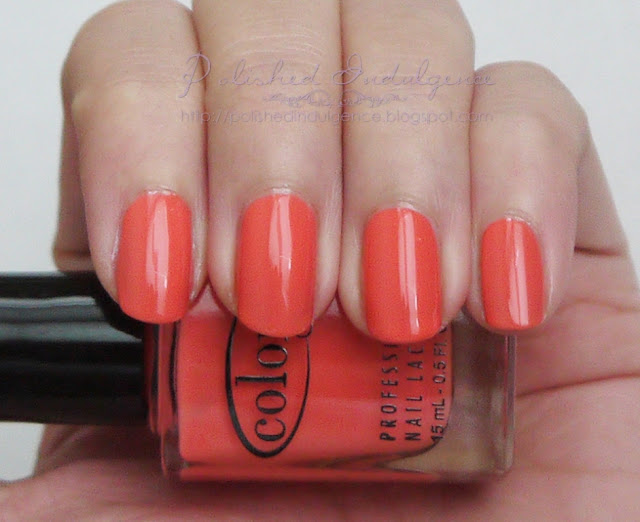 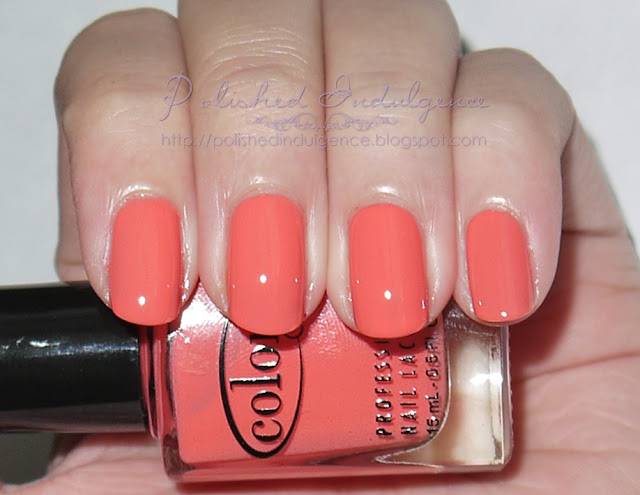 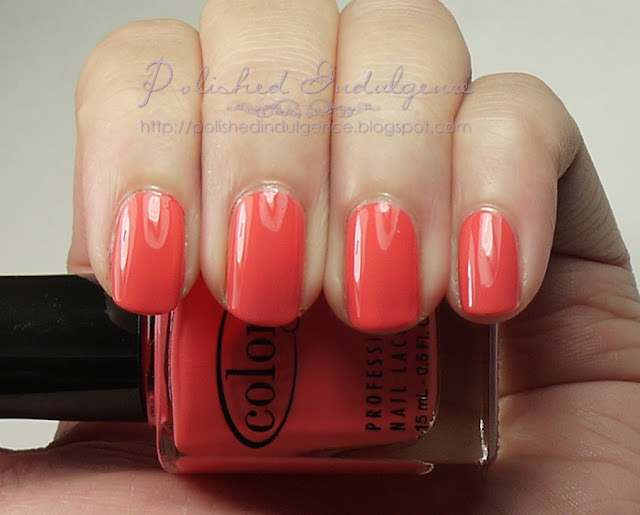 Sunlight/Top coat/No Flash
Hammie says: This reminds me of a creamsicle, doesn't it?
Seeing how Coral Cascade is already shiny on its own, top coat only offers additional protection against wear and tear, shine notwithstanding.

I did a quick search for dupes and the closest I've found are two that are possibly hard to find options; one is discontinued as it's from a 2003 (!!!) release and the other is an Australian brand. To cut the suspense, the discontinued one is OPI Apricotcha Cheating from the Las Vegas collection. Since it's an older polish, I've only seen it listed on e(vil)Bay and Amazon. It's also probably full of Big3 chemicals. The Aussie option is Ulta3 Watermelon. Both look like dead on dupes to Coral Cascade but as far as availability goes, I think I'm quite happy with my Color Club polish. For $2.14 bottle price, that really can't be beat. If you can get your hands on the Ulta3 polish though, I'd love to hear your thoughts on it. As far as I've seen, it's supposed to have a really nice formula that's ridiculously opaque. And really, who doesn't want a one coated nail polish? Either way, Coral Cascade will definitely be in heavy rotation for me this summer!


For the nail art part of this twin post, I tried my hand at those slim lines designs that have been making the rounds lately. I first saw the design on Kelsie from Kelsie's Nail Files who, in turn, pointed me in the direction of a video tutorial that made it all the more easier to see exactly how it's done. On hindsight, I think it's best if you start with a thicker polish so that the time you wait for it to be usable isn't as long as if you started with a thinner one. Thicker polish tends to create thinner lines, too (as you can see from my thumb, which I did last and the polish was at its tackiest). 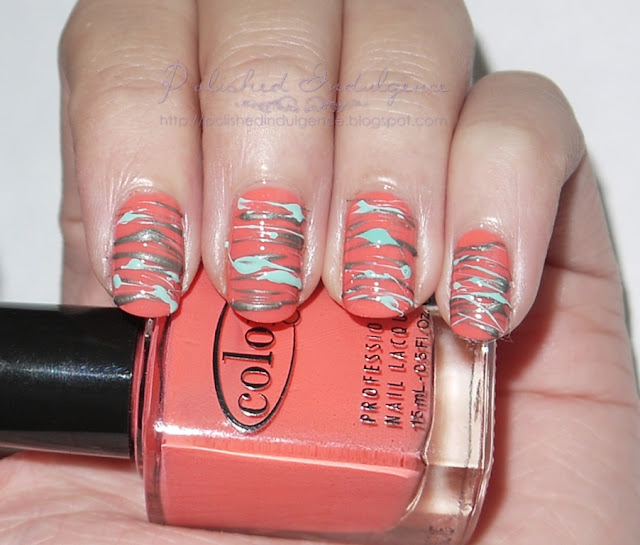 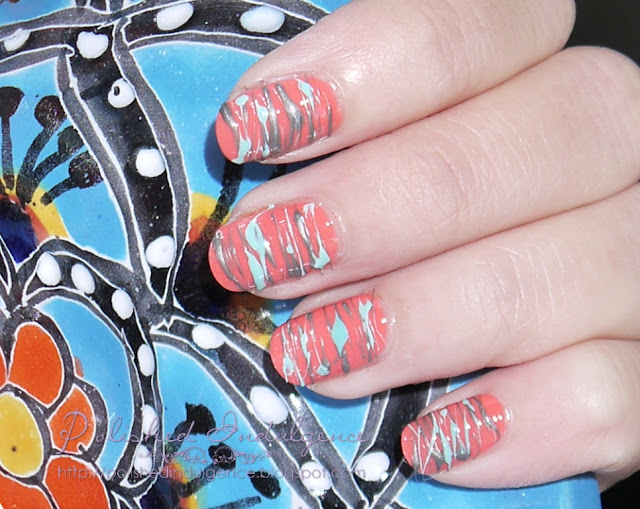 Gumdrop had bigger blobs because I didn't wait long enough for it to be properly tacky. :3 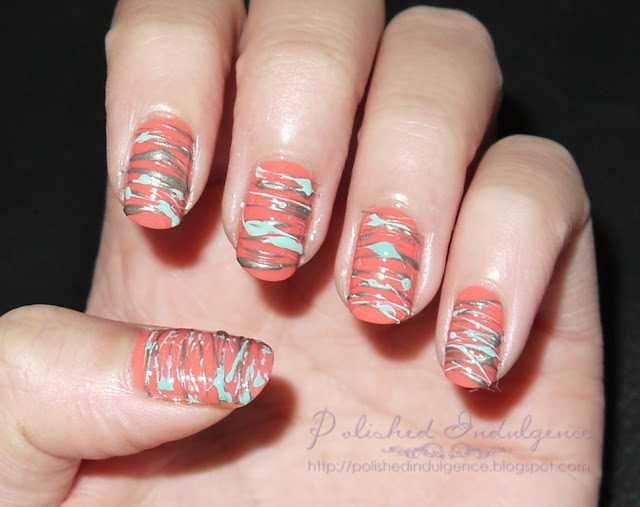 See how the lines are waaay thinner on the thumb? 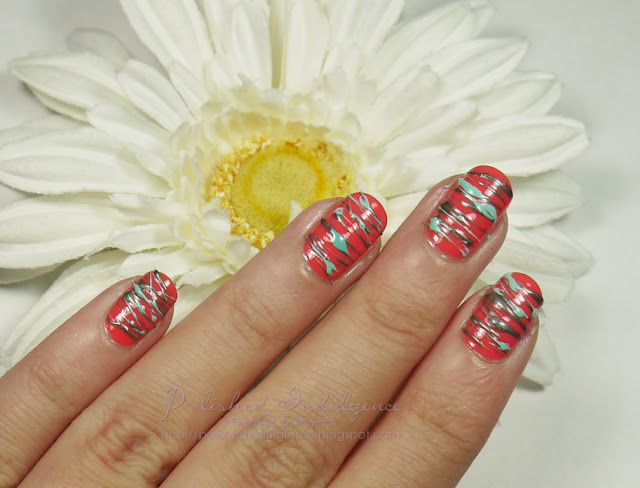 This does create a bit of texture so if you want a smooth finish, you'll need some Gelous and extra coats of top coat.
Hammie enjoyed Coral Cascade and it's pretty muted take on coral. He thinks there's something decided elegant about a more subtle take on an otherwise loud color. He also got his creamsicle fix so he's one happy hamster. That probably explains why he score Coral Cascade a whopping:

10 Hammie Points!
Ahhh, the weekend is finally upon us. It's bound to be a jam-packed one for me as the last minute little errands before the inlaws arrive are piling up. (Scuttling and scrambling my way to a clean house. Haha!) Mr. J also has his first game of the softball season so I'm hoping for more sunshine coming our way. Slushing around in a muddy field is not. fun. Where were you when that thunderstorm hit last Wednesday? Do you gravitate towards a different color set for different seasons of the year? Have you or do you want to try the slim lines mani?